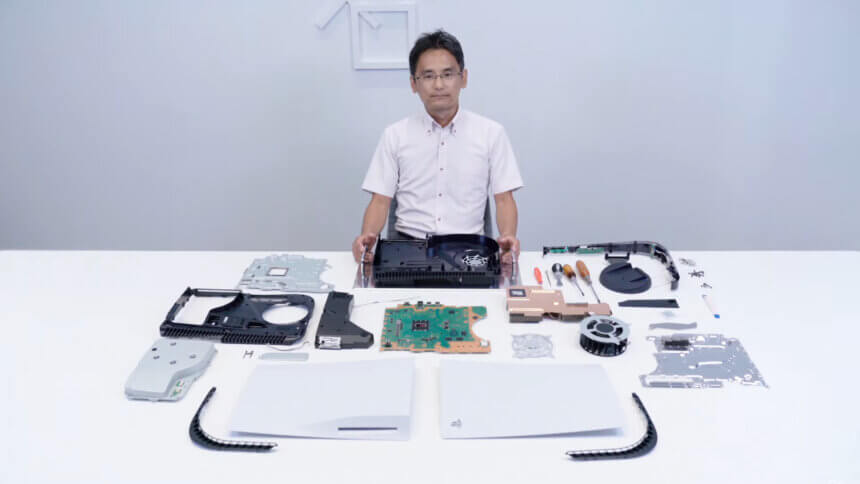 If, like us, you’re ticking days off your calendar, you won’t need reminding that it’s 36 days until the PlayStation 5 launches (or 43 if you live in Europe). For a console that has been so secret for so long, Sony has started the promotional push with some vigor.

The latest example comes today, with this eye-opening look at the console’s innards. This seven-minute video, presented by Yasuhiro Ootori — SIE’s vice-president for mechanical design — shows the PS5 laid bare. Ootori gradually dismantles a PS5 unit, highlighting important aspects of the console (in Japanese, so it’s likely you’ll need to turn YouTube’s subtitling on) as he goes.

There’s one interesting point before the screwdrivers even come out. We get a first official glimpse at the rear of the PS5, confirming some images from earlier this week. Along with the expected power and ethernet ports, and the HDMI 2.1 port — supporting up to 8K resolution and 120fps, with variable refresh rate — there’s two USB ports. These are standard Type A, but running at Super-Speed+ data transfer rates of 10Gb/s.

The two rear USB ports complement the two front ones — a Type A high-speed (480Mb/s) best suited to peripherals like driving wheels, and the Type C port — for a total of four.

Ito also shows off the console stand, which is screwed into the base when in the vertical position and clipped onto the shell in horizontal position. The stand also offers a special slot for storing the screw and cap cover when not in use, and the whole thing rotates to keep the loose items safe. After that he removes the outer casing, which appears to be ripe for both official and third-party customization with replacement items — should you not be fond of the white. Just beneath those is the SSD expansion slot.

The next major component is the air cooling system, which features — as we expected — a fenestron-like ducted fan. This giant, 5-inch fan is almost two inches thick, and will draw air into the console from both sides, with almost the entire rear of the console acting as the exhaust. There’s also special ducts in the casing to act as dust traps, which owners can vacuum to keep clean and clear.

There’s further cooling kit deeper inside the console, with a liquid metal pocket for the thermal interface material which Ootori says Sony spent two years developing. This is attached to a giant heatsink, which occupies most of the back end of the console and Ootori comments has the same performance as a vapor chamber cooling system.

Naturally the core of the console is the motherboard and silicon, and Ootori shows the rather intricate layout. We can see the CPU, GPU and the individual components of the new SSD and the I/O processor, all set out on the main board. Last but not least is the integral 350W power supply.

The console will arrive on November 12 or November 19, depending on region, and you’ll now be able to take it apart yourself. Though, other than the external blades and the SSD expansion port, Sony obviously recommends you just stick with this video.

PlayStation 5
67 Comments Discuss this post in our forums...
Test Your Badge Knowledge With Our Car Logo Quiz

Gaming 13 May 12 by Andrew Evans
The official mobile game of Formula One, F1 Manager, is undergoing a rebrand for the 2021 season. Now called F1 Clash, the game will continue to bring its style of…

Gaming 5 May 11 by Andrew Evans
Over the course of the next month, PlayStation gamers will have an opportunity to earn exclusive profile customization items — not for just themselves but for all players who take…

Gran Turismo Sport 544 May 10 by Andrew Evans
A new set of GT Sport Daily Races gets underway today, with players heading to three of the game’s real-world race tracks dotted around the edge of the Pacific Ocean.…