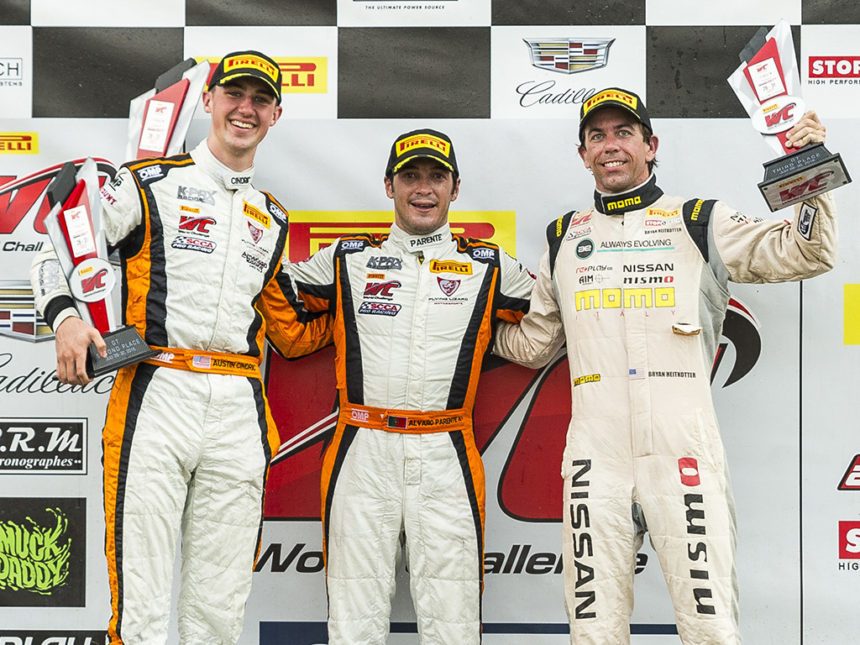 A small driver shuffle happened between Road America and Mid-Ohio: Peter Cunningham, owner of RealTime Racing — the team that dominated the previous two rounds of the series — stepped out of the championship before the race, being replaced by Spencer Pumpelly. Cunningham is tasked with aiding in the development of Acura’s NSX GT3 racer, a fitting job for the man that put the first-generation NSX on the podium four of the five years it competed in the World Challenge. Pumpelly will also drive the #34 TLX-GT at Utah later this month, but the penultimate round at Sonoma is a conflict with his IMSA schedule.

Qualifying saw the K-PAX McLarens lock out the first row, with 17-year-old Austin Cindric on pole and points leader Parente in second. GT Academy champion Bryan Heitkotter slotted his GT-R in third (check out a practice lap here), with the 650S of Jon Fogarty beside, and teammate JD Davison directly behind him in fifth. Adderly Fong completed the third row, while Colin Thompson (K-PAX 650S) and Spencer Pumpelly lined up on the fourth. Rounding out the top ten starters were the Cadillacs of Johnny O’Connell and Michael Cooper.

Nasty weather conditions on Saturday meant Round 14 would start under yellow. The racing would begin in earnest on the third lap, when the full-course caution was lifted. Parente wasted no time getting the jump on his younger teammate, settling in at the pointy end of the pack and staying there for the remainder of the race. To his credit, Cindric remained glued to his teammate’s bumper, finishing the race barely over a second behind.

Heitkotter would similarly hold his position, successfully fending off Fogarty in the Gainsco/Bob Stallings Racing McLaren. Hard-charging Ryan Eversley would finish in fifth, up from his starting position of 11th. Behind him, the ever-consistent Cadillac duo finished with O’Connell in sixth and Cooper in seventh. Michael Lewis would go on to finish eighth.

A first-lap incident collected Davison, Fong, and GTA-class competitor Michael McCann, the first in a string of accidents that saw more cars retire from this round than any other this year: Pumpelly would find himself in the grass on the fourth lap, and Kyle Marcelli’s Audi R8 got intimate with Colin Thompson’s 650S five laps later.

Parente would see his Round 14 experience played back against him on Sunday. Qualifying on pole, his 650S was passed by Michael Cooper’s ATS-V.R in the opening lap, where it remained out front for the remainder of the race. Eversley continued to show huge amounts of pace in the TLX-GT, threading the Acura from an eighth place on the grid to second by the end of the race.

O’Connell crossing the line in third ensured the Cadillac team had one of its strongest showings of the season. Bryan would qualify in fourth, the same position he would also end the race in, with teammate JD Davison right behind in fifth. Davison would earn the VP Fuels Hard Charger award for climbing an impressive 11 positions from his starting spot. The top ten was rounded out by Michael Lewis, Jon Fogarty, Spencer Pumpelly, Patrick Long, and Adderly Fong.

Parente’s win on Saturday extends his lead over second-place Long in the championship. With five rounds to go, both Long and Cooper are easily within striking distance, as is defending champion O’Connell. Eversley’s strong showings at the last two venues have helped him leapfrog Davison and Marcelli for fifth. The complete top ten standings after fifteen rounds: