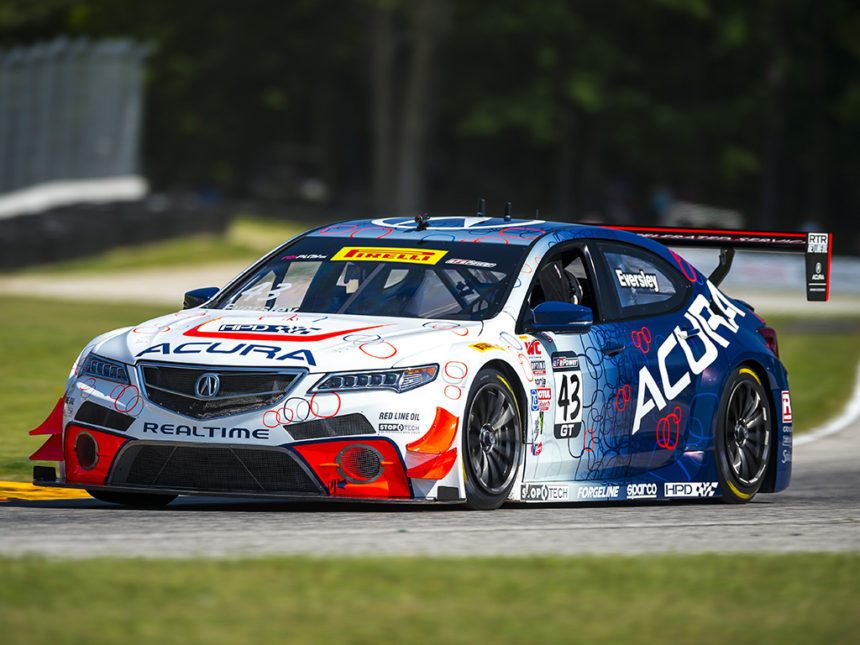 The PWC circus stopped at Elkhart Lake, Wisconsin this past weekend to take in two rounds at one of the fastest road courses in the US: Road America. By Sunday evening, the most-decorated team in the series’ history would emerge victorious, with a display of dominance the likes of which hasn’t been seen much this year.

With the RealTime Racing shop located only 30 miles down the road, the team capitalized on the home-court advantage, with team founder Peter Cunningham (#42) and teammate Ryan Eversley (#43) topping the time sheets in practice on Friday. A last-minute run by Adderly Fong in the #88 Bentley Team Absolute Continental GT3 bumped Cunningham to the second row for the race start, with Eversley up front on the outside. Patrick Long’s 911 GT3 (#58) started fourth, in front of the Cadillac duo of Johnny O’Connell (#3) and Michael Cooper (#8), in fifth and sixth respectively. JD Davison was the first of the big Nissans in seventh, with championship leader Alvaro Parente’s McLaren and Canadian Kyle Marcelli’s R8 sandwiched between him and teammate Bryan Heitkotter rounding out the starting ten.

Eversley would get the jump on Fong’s Bentley heading into the first turn, while Cunningham slipped by on the run up to turn five. An attempt to recapture second place saw Fong sail wide here, shuffling down to fifth as both Long and O’Connell shot by.

By the third lap, Davison had had moved up to sixth behind Fong. Both drivers would go on to pass O’Connell a few laps later, as the four-time reigning champ’s Cadillac experienced mechanical issues. He would end the race 19th, with Heitkotter right behind in 20th due to similar, unfortunate circumstances. In the case of the GT Academy winner, a blistering 2:07.392 secured second place on the grid Sunday.

The rest of the race went by without incident, with Fong eventually recapturing third from Long. Davison would finish fifth, with the top ten being filled out by Parente, Cooper, Marcelli, Austin Cindric (#6 McLaren 650S), and Michael Lewis (#98 Porsche 911).

Sunday’s race saw Eversley and Cunningham occupying the first and third spots on the starting grid, with Heitkotter and Fong beside them in second and fourth. Heitkotter kept on the Acura’s tail from the drop of the green flag, but a full-course caution after a GTS-class Viper made contact with the wall saw the pack re-group in a single-file line.

Shortly after the restart on lap 7, a quick succession of accidents saw the order shuffled. Up first were Kyle Marcelli’s R8 and Michael Lewis’ 911, while the McLarens of Austin Cindric and Jon Fogarty traded paint only a few corners later. Lewis and Cindric would both receive drive-through penalties for the contact.

O’Connell’s mechanical issues from the previous race would continue, dropping him down the lineup again. Davison made an unplanned visit to the pits before the tenth lap, also putting an end to hopes of a high finish. The pair would finish 19th and 17th in class, respectively.

Unfortunately, Heitkotter would suffer a similar fate in the final minutes of the race. After remaining in 2nd from the beginning, a technical issue would place him between Davison and O’Connell in the results. We can’t help but be reminded of another last-minute issue from earlier this month…

Eversley would go on to sweep the weekend, nabbing his fourth career win in the process. Teammate Peter Cunningham finished fourth, with Adderly Fong and Michael Cooper taking the second and third steps on the podium, respectively. Patrick Long rounded out the top five.

The teams now enjoy a month off, before heading to Mid-Ohio July 29.

Automotive News 52 Jan 14 by Andrew Evans
Toyota has become the first brand to reveal its Le Mans Hypercar in full. Sticking with Toyota’s naming scheme for its World Endurance Championship vehicles, but shaking things up a…