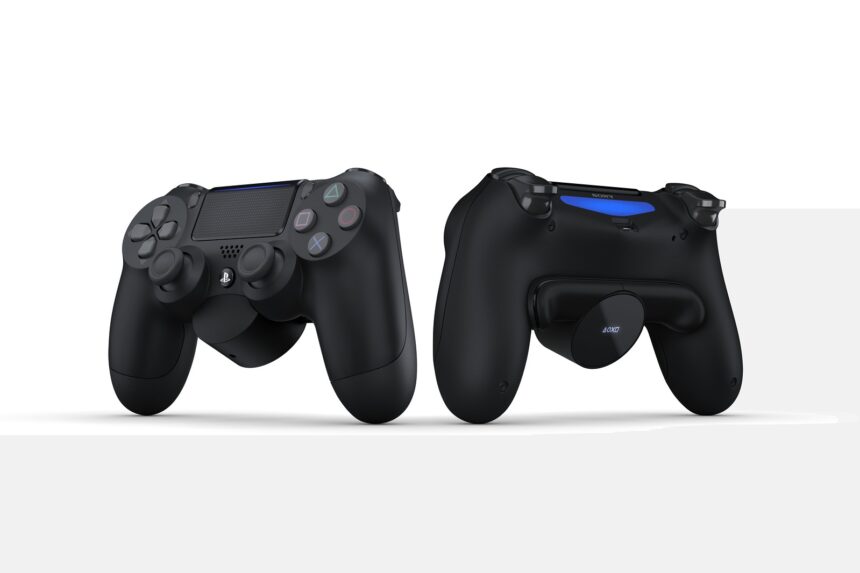 While all the chatter right now is about the next generation of consoles arriving this time next year, Sony hasn’t forgotten the current machines just yet. It has just announced a new add-on peripheral for the DualShock 4 controller, going by the less-than catchy name of “Back Button Attachment”.

The new official device does pretty much exactly what it sound like it does: it gives players two extra buttons on the back of their DualShock 4 controller. Sony’s designed the peripheral to slot into the ports at the bottom of the controller, to give two new buttons underneath along with an OLED screen.

That also means that the BBA occupies the DualShock’s 3.5mm audio jack, but the device features its own port to allow for audio pass-through. This way you can clip the BBA into the controller but still plug in your headphones if you need to.

The BBA allows players to map up to 16 different actions to the two back buttons, covering any of the controller’s regular face and shoulder buttons. This means that if you have a game where you need to press a tricky combination of buttons and contort your hand into shapes normally reserved for Dr. Strange’s incantations, you can simply reassign a function or two to the BBA.

That OLED screen displays current button assignments. Players can save up to three profiles for use in their favorite games, and the screen will display the profile currently in use. It also serves as a dedicated button allowing you to remap buttons on the fly.

Although perhaps aimed more at heavy button-bashing games, we can see this being useful in racing games too. Reassigning the handbrake to the BBA for example would allow you to keep your thumb precisely on the throttle while pulling the handbrake with a spare finger, to get better rotation.

If it sounds like something you’d go for, you’ll have to wait to get your hands on it. Sony will launch the BBA on January 23 in North America for $29.99 (C$39.99), with Europe following on February 14 and priced at €29.99 (no UK price announced). Perhaps it’s also a hint at what the DualShock 5 may look like…

PlayStation 4
35 Comments Discuss this post in our forums...
F1 2020 Review: A Winning Formula

Gaming 14 Jul 7 by Gary Slater
The excitement for the next console generation has truly kicked in to high gear. Following Sony’s Playstation 5 reveal, Microsoft is set for another games event for the upcoming Xbox…

Interviews 6 Jul 7 by Andrew Evans
Usually on GTPlanet, we’re looking outwards. As a media channel, we look to conduct interviews with some of the most interesting people in the motoring, motorsports, and racing game worlds,…