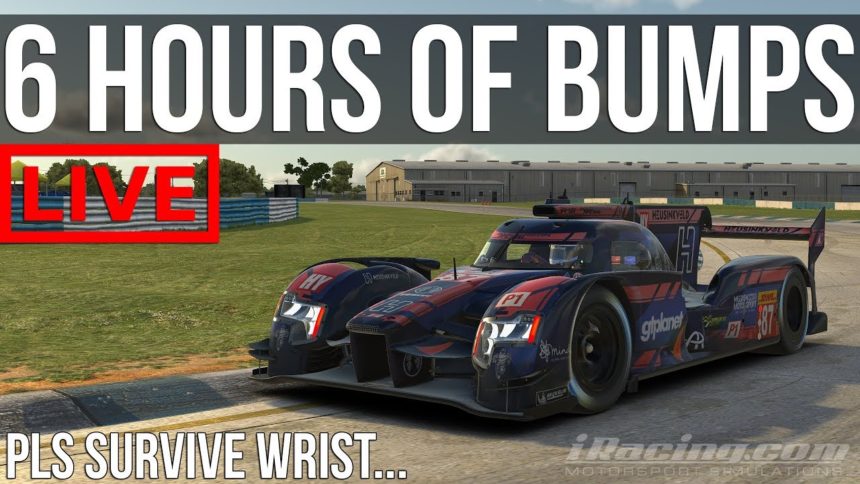 The Unforgiving Bumps Of Sebring Took Their Toll

Sebring International Raceway – one of the most iconic endurance racing venues in the world. It’s a track that is famed for its brutal, bumpy and unforgiving nature. It also played host to the first round of the new iELMS season, much to the dismay of my poor wrist.

Why do I say dismay? Because I carried a wrist injury into this event after a recent Assetto Corsa Competizione stream. The cause being an incident where the wheel was ripped out of my hands unexpectedly. I’ve talked about the strength of direct drive wheels, but that incident demonstrated the danger of a crash, even in sim racing! The remnants of the injury played a part in the race, but more on that later…

This event would be a first for iRacing. Following the introduction of day/night transitions, this would be the first official race to make full use of it. Transitions are nothing new in the gaming world, but very few have to contain the subtlety in temperature that you need in a simulation.

We believed a good result was well within grasp. The R18 was good in practice: it felt predictable and, most importantly, able to ride the many Sebring bumps. With the short lead up time, there wasn’t an opportunity to try anything new with the setup. Throw in the day/night transition and we’d be doing a lot of learning on the job!

Qualifying is something we usually struggle with. With the R18’s inherent single lap pace disadvantage, we spent very little time worrying about it. However, the gap to pole was still a bit of a shock. Bailey’s 1:39.6 ended up TWO seconds off Patrick Wolf’s pole lap.

To give that some context, Patrick Wolf is one of the fastest LMP1 drivers in iRacing. The 919 is also the car to have for a hot lap, given it has a bigger hybrid system. Even so, two seconds is a huge gap and was a bit of a kick in the nuts. Despite that stunning lap, we usually find ourselves closer in race trim.

For the second race in a row Bailey nailed the start, briefly taking the lead going into turn 1. Despite that, Wolf would hold it around the outside to lead out of the corner. The first few laps gave us hope that we might be able to stay within striking distance, but that hope was very quickly extinguished as Wolf eased away. From then on, the leading Porsche never looked back.

With Wolf clearing off, our attention turned to my physical ailments and holding on to second place. With my wrist issue, I had to take some painkillers and wear a wrist strapping. Right from the start, I felt off colour. The combination of pain, painkillers and energy levels really didn’t agree with me.

While I was sitting there struggling, Bailey had pulled out a 14-second gap to second as we pitted. With the gap, we decided to take tyres. While the track temp made double stinting very possible, the first stint of the race is always the hardest on tyres. Despite the time loss, having the extra grip in traffic is a huge help.

The tyre change resulted in dropping to third, but with the pace of the new tyres, Bailey soon reclaimed position. This time he set about building a gap that wouldn’t be lost for the rest of the race.

With that, it was time for me to have a go. I’ve said it before, but watching someone drive your car is nerve-racking. It’s even worse when some tries to rejoin the track in a scary manner.

Races like this, where you find yourself in a bubble, can be a real challenge. You have to find ways to keep your mind in the race. My aims were simple; not let my physical condition affect me and deal with that new iRacing phenomenon – going from daylight to darkness. It’s a magical time of day, but the way it changes the track is even more fascinating. 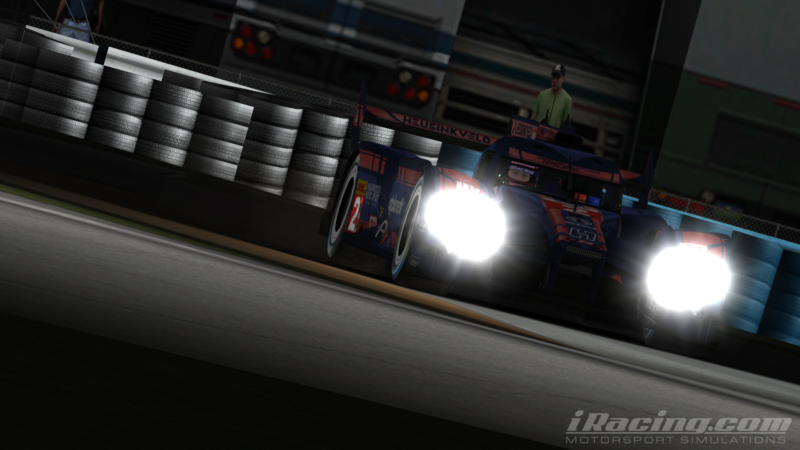 As darkness rolled in, the track got cooler. Even though the overall temperature didn’t change much, the difference in the car was noticeable. It felt so much better. If anything, it seemed to help us more than others in the class. Where it was lethargic in traffic in the day, it was much easier to set up passes at night. A feeling Bailey seemed to echo in his second stint.

Through nearly all my time and Bailey’s second time in the car, very little happened in terms of our race. We came across the odd GTE car doing the opposite of what it should be doing, but that was the only real on-track excitement in over four hours. That would soon change.

With around 20 minutes left, I had a moment heading towards Tower turn. Up to this point, I’d been able to hold it all together. My wrist held on and, despite feeling ill a few times through the evening, I’d been able to soldier on, but I hit a hard limit. Within a couple of laps, I had to hand it off to Bailey to finish.

After getting out, I had to go for some fresh air. In the process, I nearly threw up. Thinking blood sugar may have been a little low, I grabbed a snack and some fluids. In truth, it was a combination of things. The painkillers didn’t agree with me and driving with an OSW is demanding. Add in fatigue and not enough food/fluids, it’s easy to see how this can happen. It was a timely reminder to take care of myself.

Thankfully Bailey brought the tractor home to secure us yet another podium finish. Despite my moment, this result kept up our record of finishing in the top three in every iELMS race we’ve finished, with a single DNF to our name. Consistency brings good finishes and even championships. With five events to go, it could well do that again.

Gran Turismo Sport 1566 Feb 17 by Andrew Evans
GT Sport‘s first World Tour event of the year is still fresh in our minds, but already it’s time to prepare for the next stage. The Pre-Season for 2020 FIA…