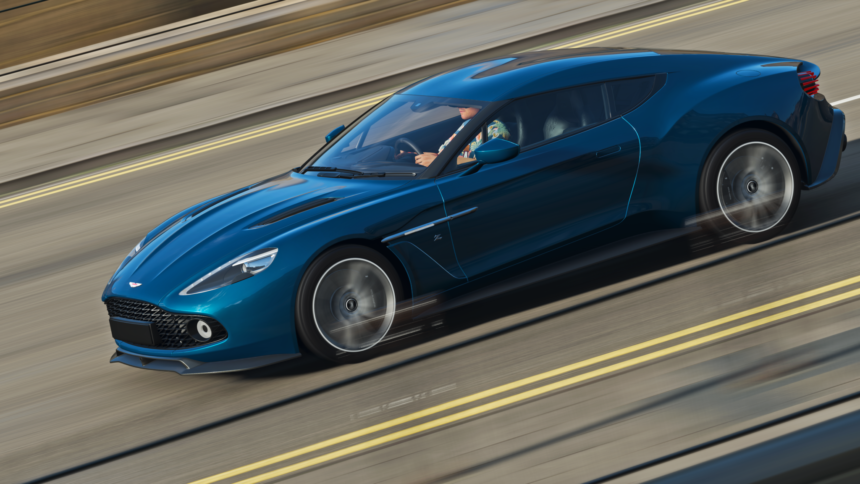 Spring time has once again graced the UK in the latest season switch for Forza Horizon 4. It’s the final week of Series 12, which means the last batch of content for this month is up for grabs.

The Festival Playlist features a fresh update this week. Prizes are available for completing the season to 50% and 80%. It’s a mainly rally-themed selection this week, with a stylish new Aston Martin making its debut as well.

This week’s events are below. 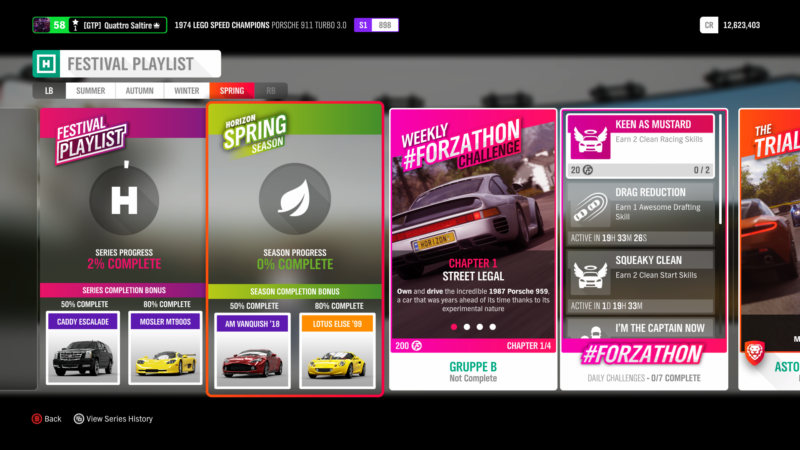 The headline car for this week is the new Aston Martin Vanquish Zagato Coupe. This Italian-styled GT is the result of Aston’s decades-long collaborations with Zagato.

With 99 units built, this Vanquish is a rare beast, and it has the firepower to back up its dramatic looks. The 6.0-liter V12 makes an impressive 600 horsepower, meaning that you can blast across Britain with flair.

Joining it is the Lotus Elise Sport 190. This little British sports car packs a bigger bite than some would realise. Despite having just 190 horsepower, the Elise counters by weighing a scant 1500lbs, meaning it can tackle winding roads with ease.

Seasonal prizes are populated by the Lamborghini Aventador SV and Hoonigan Ford Escort Cosworth for this week.

The Maserati MC12 Versione Corsa makes a return to the prize pot this week as well. Players can acquire this 760 horsepower track monster in the “Aston Martin Cup” Trial event.

The Spring Showcase remix returns with players racing against the Deltawing plane. This time, the weapon of choice is the Ferrari 812 Superfast.

Our breakdown of this weeks prizes is below.

Racing Through The Years – 80s 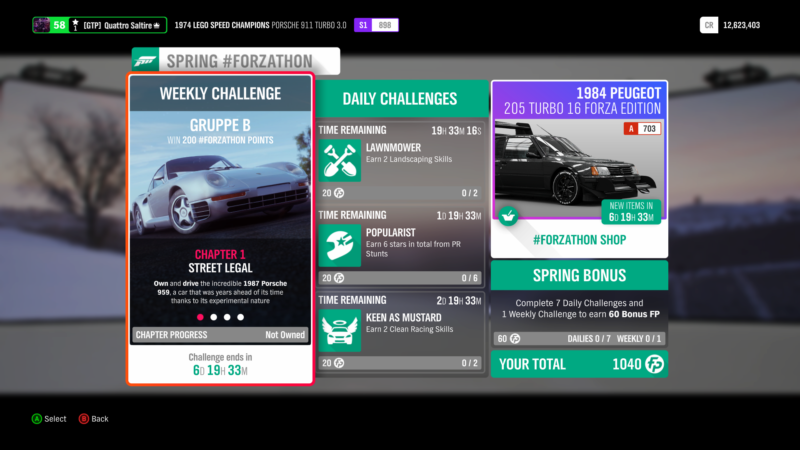 Forzathon turns back the clock this week, with one of the most advanced cars of the 1980s taking the spotlight; the Porsche 959. To get things started, you’ll need to own and drive this technological marvel.

Next, show the 959’s surprising rally pedigree by winning 3 Dirt Trail events. Hit the streets for the third objective, as 2 Street Scene victories are required to progress.

To finish up this week, take some brave pills and earn 10 Ultimate Near Miss Skills. 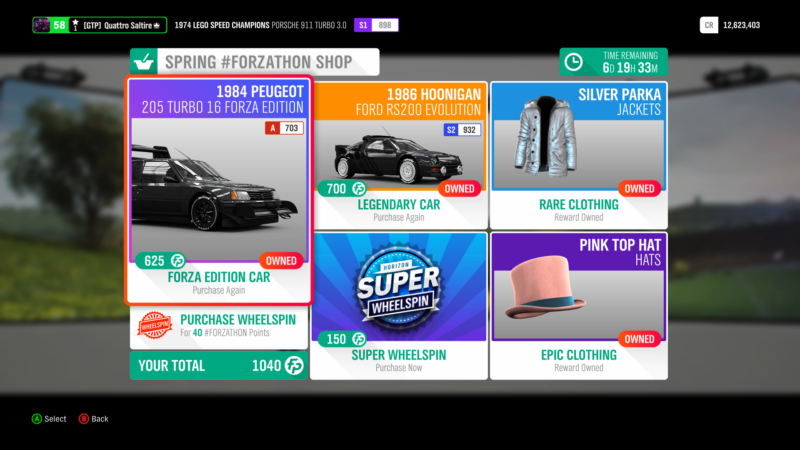 Rallying dominates the shop this week. Leading the way is the Peugeot 205 T16 Forza Edition.

This Group B legend sports wild Pikes Peak aero additions as well as a Skills Boost. Costing 625 Forzathon Points, we recommend looking elsewhere if you haven’t already got one.

The Ford RS200 joins the Peugeot this week. This one has been tweaked by Hoonigan and turned up to the extreme. It’s turbocharged 4 cylinder engine now makes 750 horsepower, which is more than enough for blasting through forest trails or tearing the tires apart doing big skids.

The RS200 costs a hefty 700FP, meaning a big dent in your wallet is required if youn haven’t completed your Hoonigan collection.

Clothing items for this week are the Silver Parka jacket and the Pink Top Hat.

Forza Horizon 4 Season Change
17 Comments Discuss this post in our forums...
Can You Beat the Impossible Gran Turismo Quiz?