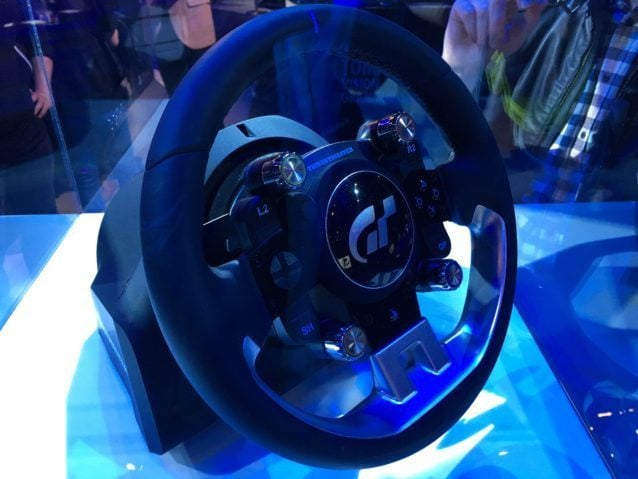 In amongst the many announcements made at last week’s Copper Box blow-out of Gran Turismo Sport, Thrustmaster made a quiet reveal of their own on the show floor, showing off a new wheel coming in the future that will presumably be the official steering wheel of GT Sport.

The wheel itself looks to be a very high-entry accessory, boasting a slick and smooth matte look on the rim. Chrome knobs at the corners of the wheel interior appear to act as redundant PS4 face buttons – indicated by the outline of colour on each knob. The base is naturally curved with the design completed with a small vent on either side. Whether this serves a purpose or not can’t be determined at this point, but given how expensive the whole package looks, it may not be surprising to suggest there may be some sort of cooling mechanism in the wheel. 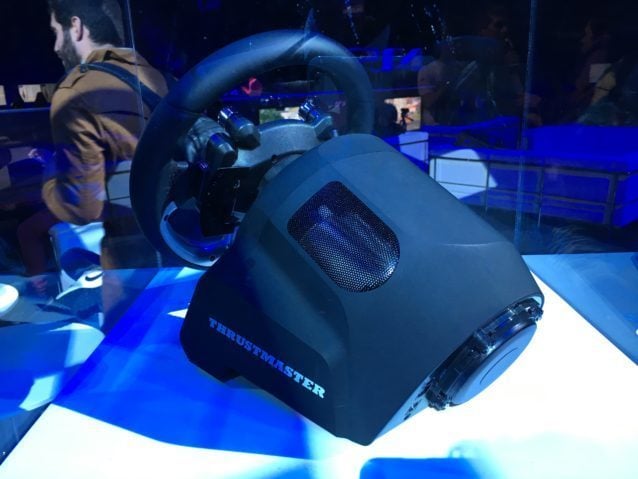 The aesthetics of the accessory look to be loosely based on GT5’s official wheel – The Driving Force GT – complete with the GT logo emblazoned (larger than ever…) in the centre of the rim. The paddle-shifters on the rear look very unique, not following the form of any Thrustmaster wheel to date with a floating effect, while the shifters themselves coming across rigid and edgy in design.

Kazunori Yamauchi talked to GTPlanet about the wheel giving some interesting insights. Firstly, Yamauchi makes note that this wheel will be ‘Direct Drive’ – meaning that the motor shaft is directly linked to the wheel itself without the use of belts and gears. A main positive in Kazunori’s eyes for this is that “It generates high torque from the motor, and the torque is stable.”. The stability of the torque is something Polyphony found important, pointing out that there are no wheels currently on the market that have a linear torque pattern, which is something the new GT Sport wheel will look to include.

Even when you play with the wheel for hours at a time, the torque delivery will remain stable.”

“Balance and Precision” is what to expect from this wheel when it hits stores. Currently, there is no release window but one could assume we will see this wheel launch within the same window as GT Sport itself.

Andrew Evans · May 27, 2016· Comments
Fanatec’s direct drive Gran Turismo DD Pro is available for customers in Europe and the USA to order again, with first deliveries expected in or before February 2023.

Michael Leary · May 27, 2016· Comments
In news that is sure to make the holidays a bit more festive, Sony Interactive Entertainment president Jim Ryan has announced that the console shortage woes that have plagued the PS5 since launch are now resolved.

Andrew Evans · May 27, 2016· Comments
Serious sim racing can be an expensive business. Sim racing kit will set you back hundreds of dollars — or more — and that’s without considering a sturdy place to mount it.

Andrew Evans · May 27, 2016· Comments
After more than a year of waiting, Thrustmaster has finally revealed its new Direct Drive wheel: the T818.

Andrew Evans · May 27, 2016· Comments
If you’ve been waiting to get your hands on the official wheel of Gran Turismo 7, the Fanatec Gran Turismo DD Pro, now might be your chance as Fanatec is once again carrying stock — but you’ll need to be quick.

Jordan Greer · May 27, 2016· Comments
Logitech has just revealed the G PRO Racing Wheel, and it’s a product I never thought it would actually make. The company has a long history of producing reliable, entry-level sim-racing hardware, but it has always ceded the higher-end of the market to companies like Thrustmaster and Fanatec. With this new direct-drive wheel, all of that changes in a pretty big way.