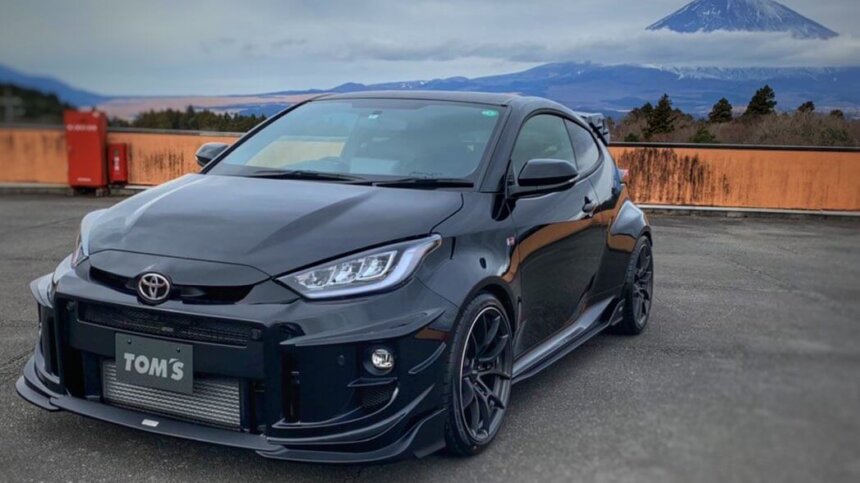 Although the GR Yaris is one of the most interesting and unhinged cars released in recent years, there’s always room for improvement. Even with something as obviously loopy as the GR Yaris — which, let’s not forget, has an entirely custom body shell rich in composite materials, purely because Toyota wants to make a killer rally car out of it — car manufacturers are bound to certain safety and emissions standards.

Tuners don’t need to stick to these limits, and can push things a lot further, as this Tom’s GR Yaris proves. Tom’s actually revealed the car during a live stream in which it also showed off the now-restored #36 Toyota Castrol Supra, as you can see below:

Of course we can see the obvious visual changes to the GR Yaris from the outside. There’s an entirely new front end, with new canard moldings, new splitter treatment, and larger openings for both the intercooler and what seems to be brake ducts.

There’s some hints that there’s a lot more going on underneath too. For instance, the Tom’s GR Yaris now boasts six-pot monobloc brake calipers from Endless, rather than the regular four-pots. The car’s also had a mild drop, courtesy of a Luck V1-DFA dampers, which have a 24-way damping force adjustment.

As for more power, well that’s under wraps right now, but we doubt that new center-exit exhaust and enormous intercooler are just there for show. Other tuners have already set to work on the 257hp (268hp in Japan) 1.6-liter, three-cylinder, pushing it over 300hp.

Tom’s hasn’t quite finished developing the car, but should be ready to show off the finished product later in the year. Given that it’s also enlisted the help of Toyota GR World Rally Team driver Takamoto Katsuta to help, it should be a pretty impressive thing.

Toyota Yaris
20 Comments Discuss this post in our forums...
Test Your Badge Knowledge With Our Car Logo Quiz