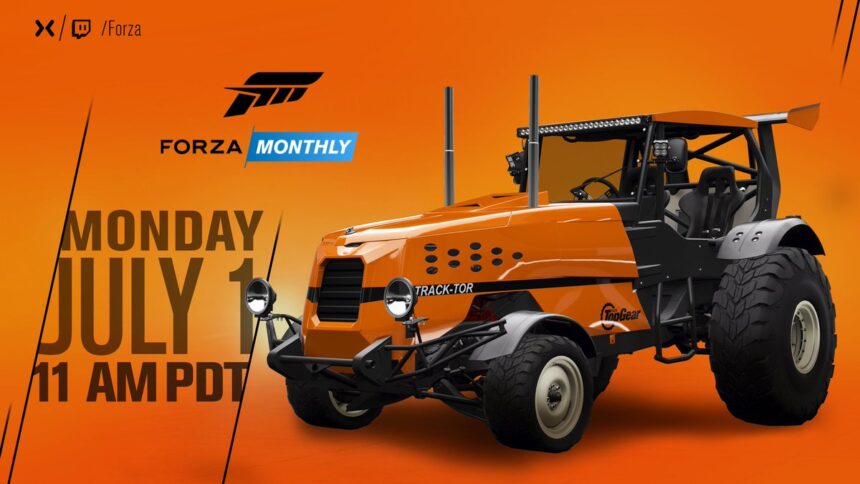 Turn 10 has pencilled in the date for the next episode of Forza Monthly. As well as updates on the future of the Forza franchise, fans can look forward to a new car to drive.

Except the latest Spotlight vehicle is not a car, but a tractor. More specifically, the vehicle in question is the “Track-tor”, built by Top Gear. Forza has had its fair share of oddball cars added to the series in the past, and the “Track-tor” may be the strangest yet.

Built during Series 25 last year, the “Track-tor”, driven by The Stig, set a new land speed record for tractors at a dizzying 87.27mph.

Under the hood, the “Track-tor” packs a 5.7-liter Chevrolet V8 making 500 horsepower. It also features modified air suspension and upgraded brakes for all four wheels.

It is unclear if the “Track-tor” will appear in either Forza Motorsport 7 or Forza Horizon 4 but we will find out on the upcoming Forza Monthly stream. Our money would be on a release for FH4, especially since FM7 has already received a Top Gear car pack.

Wherever the “Track-tor” ends up, we’ll know rather soon. The Forza Monthly stream will broadcast on Monday July 1. The stream will kick off at 11am PDT, or 7pm BST for UK viewers.

To see the “Track-tor” in action, check out the record run on Top Gear’s Youtube channel.