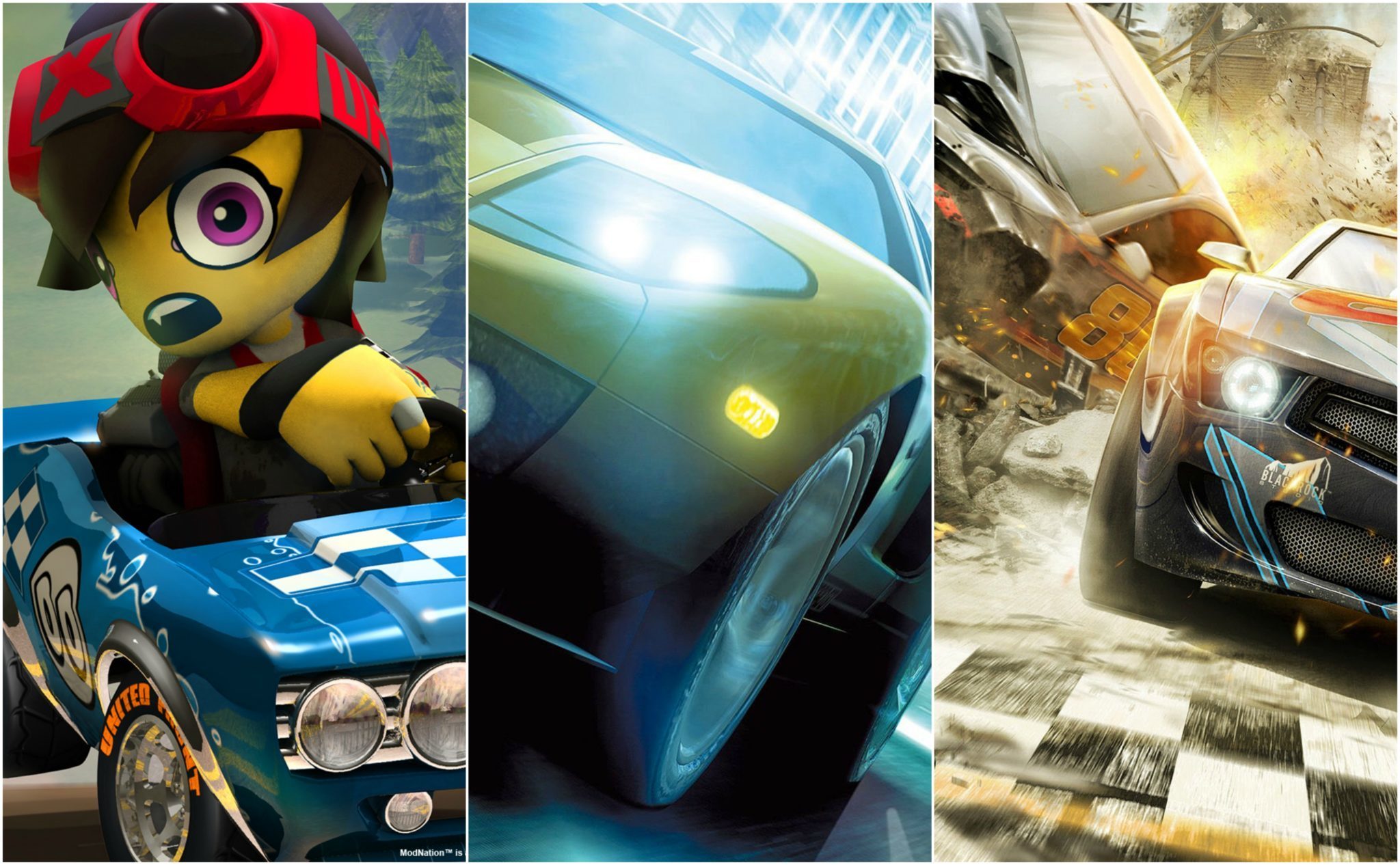 The month is May 2010. Just four weeks before E3, one of the biggest games ever is about to launch: Red Dead Redemption. However, the month will be fondly remembered by arcade racing game fans for another reason.

In one of the strangest release schedule cock-ups of recent times, not one, not two, but three ambitious titles all launched within a week. In 2017, many comments were made about the tight release schedule of the latest sim racers but this took things to another level.

This is the story of how Split/Second, Blur and ModNation Racers locked heads with no true winner in the end.

If you’re unaware of these three titles, it wouldn’t quite be a surprise. For an arcade racing game enthusiast like myself however, the titles often crop up in my “what if?” scenarios. Each title might’ve offered a different type of racing experience, but they’re also related in many unexpected ways.

Blur was aiming to bring a whole new IP to Activision’s library of game series. With a recently acquired Bizarre Creations taking the reigns, there was huge potential for this one. It was essentially Mario Kart for grown-ups, a point made abundantly clear in pre-release trailers.

With the backing of a publishing giant, a fantastic reception from focus groups and a style that caught the eye of many, Blur was looking like the next best thing in racing.

Split/Second could even trump the Activision sponsorship of Blur, as Black Rock Studios’ racer would be published by Disney Interactive. The House of Mouse was pretty invested in console gaming at the time and after success with Pure, Black Rock was given the green light for its next project.

Touted as an “action-based” racing game, Split/Second was a mental mashup between Die Hard and Burnout. Not only could you crash out your opponents but buildings could be detonated on a whim and huge jetliners could be called in to crush your opponents.

It looked stunning on the previous generation’s hardware. The overwhelmingly positive initial reception led to the title getting a subtitle in some regions. The game would launch as Split/Second: Velocity, hinting at a future for a new IP series.

Completing the trifecta, ModNation Racers was the latest flagship in Sony’s then prevalent Play-Create-Share series. Headed off by new development studio United Front Games, a strong E3 showing really proved how cool this game was. Characters and cars could be modified to your heart’s content, but the real showstopper was the track creator. Approved by Kazunori Yamauchi himself, the tool is still considered by many to be the best ever.

You literally drove the track to create it. It doesn’t get more intuitive than that.

So, three exciting titles, all with their own niche to fill and a publishing giant to bankroll each project. Yet, as the title of this article suggests, everything ended in disaster. How did this happen? It’s all a bit complicated, really.

When I commented on Activision being optimistic about Blur, I wasn’t kidding. The publisher went on record early in the game’s development stating that the game was going to be massive. So big in fact, that Activision boldly claimed it would “do for racing games what Call of Duty did for shooters”.

To make such a statement in 2009 is as far as praise or expectation goes. There was nothing like the CoD behemoth but clearly, Activision thought Blur was going to go the distance. Further details also indicated that there was a $40 million prize involved for Bizarre Creations if it could meet sales targets. 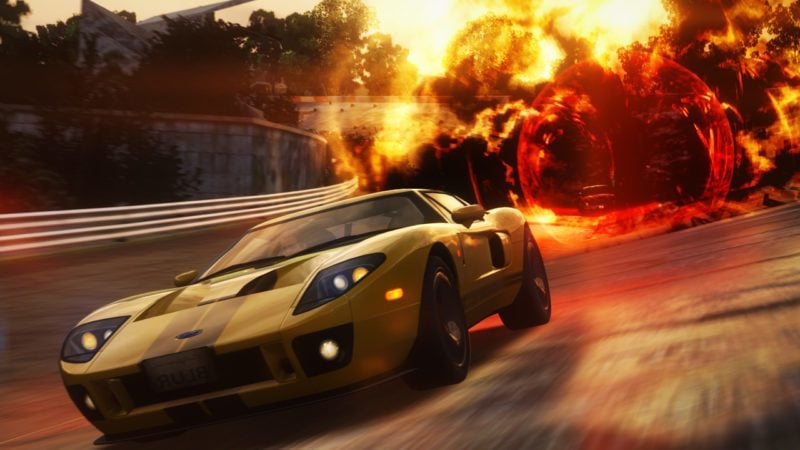 A rocky development cycle meant that numerous changes were made throughout its pre-release life. A core storyline that would be a large part of the game was ditched in favour of friend-focused social features. Changes behind the scenes led to the game’s release being pushed from November 2009 into the following year.

Split/Second didn’t quite face the massive expectations and changes that Blur did. It had a different issue all together though, one that was sure to impact development and a subsequent release. A few months before the game would hit shelves, word started to get out that Disney was no longer interested in publishing and investing in the “highest end console games”.

A series that would rely heavily on crazy visual stunts and world destruction would definitely fall under that category. This would be the first warning sign for an impending rage quit from Disney later down the line.

As far as ModNation Racers was concerned, all looked fine from an outsider’s perspective. Pre-release hype was building for the PlayStation exclusive with a slew of gameplay clips and sizzle reels showing off the creator tools. After the success of LittleBigPlanet under the Play-Create-Share mantra, PS fans were onboard, it seemed.

With each game ready for players to get stuck into, final release date choices were made. And that’s where the problems really began: 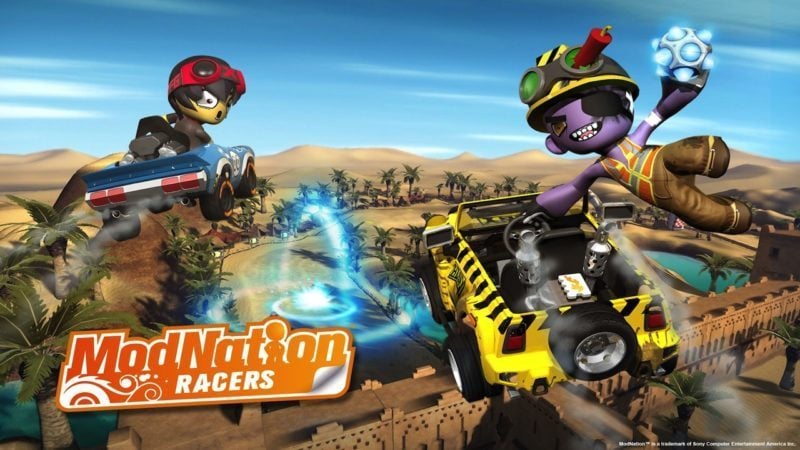 The idea of releasing three games in one week all targeting the same genre just seems crazy. Even more so when you consider that Rockstar’s long awaited Red Dead Redemption would launch in the same time frame. Each title proved a large obstacle to each other, hindering sales.

Blur wouldn’t finish in the top 20 sellers list in the US for May 2010, selling a meagre 31,000 copies. Activision’s Dan Amrich rebutted the importance of this by going on the defensive, pointing out that the title was only on sale for “168 hours” in the month:

“June’s data will be very interesting to see, and I don’t expect to hear much about any victories it might represent, since it’s a less sexy story than ‘Blur failed in week one’. Bad news travels fast.”

Blur didn’t chart in June, despite Amrich’s frustration at the game’s lack of appeal in the US. The game would also fail to chart in the top 10 within the UK on its first week. Former Bizarre Creations developer Gareth Wilson summed it up with hindsight by stating that Blur was a “confusing” proposition for audiences. The merging of realistic racing and Mario Kart-like mechanics was hard to comprehend for the average consumer.

Split/Second might have debuted a bit better in the US, selling 86,000 units in May, but this was still far from impressive considering this was a Disney-published game. Opening week in the UK made for better reading, placing 5th and becoming the strongest debut seller of the three interlinked games.

ModNation Racers actually performed reasonably in both major markets. Benefitting from its status as a PlayStation exclusive and heavy marketing, it placed 18th on the May 2010 NPD charts, doing what Activision’s Dan Amrich thought impossible. UK performance wasn’t staggering but consistent, keeping amongst the top performers longer than its fellow racers.

Even though all three games had a decent reception from critics (Blur had an average score of 81%, Split/Second 84% and ModNation Racers 82%) and admiration from fans who did purchase the game, the outlook wasn’t good. Whilst all the blame can’t lie with the release scheduling, there’s no doubt that this and unrealistic expectations attributed to each series (and its developers) downfall. 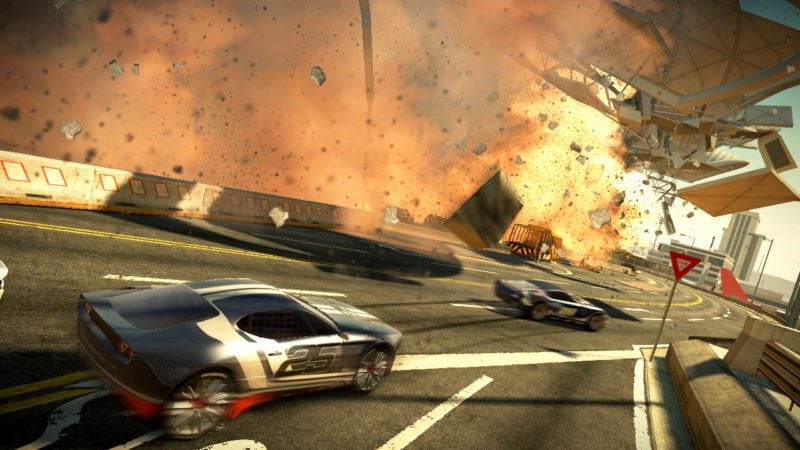 It goes without saying that none of the games performed how the publishers expected. Just seven months after the release of Split/Second: Velocity, word spread that a sequel had been canned by Disney. A month later, news would break that Blur developer Bizarre Creations would be cut loose by Activision. Despite lofty ambitions and unrealistic expectations for Blur, the publisher would cut life support for the team. Even under a year from release, things looked bleak for Split/Second and Blur.

Further bad news followed as Black Rock Studios would only survive until July 2011. Disney shuttered the developer much to the surprise of many. The true picture though seemed different: ex-employees claimed that Black Rock “never stood a chance” and Disney was trying for quite some time to cut ties.

ModNation Racers is once again the most successful story of the three. Despite never getting a proper sequel, United Front Games would port a smaller version of the game to Vita with a few changes. Much like Sony’s trust in the handheld itself though, it seemed like this was nothing more than a bit of lip-service. The team’s final work with Sony was on LittleBigPlanet Karting, which felt like a less ambitious karting game with a reliance on an existing IP.

UFG would go its own way and release open-world action game Sleeping Dogs. Even with a good critic reception, sales were sluggish. Eventually, United Front Games would close its doors in 2016.

What if Things Had Panned Out Different?

It’s such a shame that three bright IPs would fall to the wayside after one (proper) entry in each. Poor selling power due to unfortunate release timing would ultimately contribute to each downfall. This isn’t a guess either; many stakeholders involved in this arcade racing threeway have commented that giving people too many options in such a short space of time wasn’t a great idea.

Whilst gamers will never see anything on the supposed Split/Second sequel, they did actually get a glimpse of what a potential Blur 2 could have looked like. Shared in 2014 by ex-Blur developer Chris Davies, the footage shows off a new game engine and enhanced visuals. It highlights what players could have had, if things had panned out differently.

I’ve always wondered why Sony really didn’t seem to care about a proper ModNation Racers sequel. Even to this day, it has one of the most advanced suites of customization tools out there. Players were making full recreations of Gran Turismo tracks and cars to a crazy degree of detail. MNR really was one of a kind.

All three of these games are worth playing because of what they tried to do. They aren’t unanimously loved but how many experimental titles are? Blur, ModNation Racers and Split/Second all brought a new spin on arcade racing games with varying success. Each title’s gimmick is something gamers might never see again.

For that alone, it’s worth hunting them down, playing them and wondering what could have been. Here’s to the lost, ambitious racing IPs throughout the years. The fans still remember you and they always will.

Split/Second is currently free on this month’s Games With Gold Program for Xbox One.

Jordan Greer · Feb 14, 2018· Comments
The Gran Turismo series has had a lot of milestones over its 25-year history, but the anticipation surrounding Gran Turismo 7’s free launch-day support for PSVR 2 is reaching hype levels not seen in quite some time, if ever. Kazunori Yamauchi feels it, too.

Andrew Evans · Feb 14, 2018· Comments
After a break in real-world racing following the controversial events at the end of the 2020 FIA Formula 3 championship, Igor Fraga will be returning to action this season in Japan’s major national racing series.

Andrew Evans · Feb 14, 2018· Comments
A new week means a new set of Gran Turismo 7 Daily Races, with three races running on their usual 20-30 minute schedules for the next seven days.

Jordan Greer · Feb 14, 2018· Comments
After I had the opportunity to be one of the first people to play Gran Turismo 7 with PSVR 2 last week, I also had the chance to speak with Gran Turismo creator Kazunori Yamauchi for a one-on-one interview to discuss the new hardware.

Andrew Evans · Feb 14, 2018· Comments
Need for Speed and sports clothing brand Puma have teamed up for a crossover capsule collection with game-inspired clothing that allows you to match your avatar from the virtual environment of NFS Unbound.

Gary Slater · Feb 14, 2018· Comments
February has graced us with its presence, and has also brought along a new Spring season for Forza Horizon 4. We’re into the closing stage of Series 57, with one more week of cars to win and events to complete before the next series arrives.

Andrew Evans · Feb 14, 2018· Comments
The new Series of Forza Horizon 5 is here, celebrating all things Japanese automotive across the next four weeks.