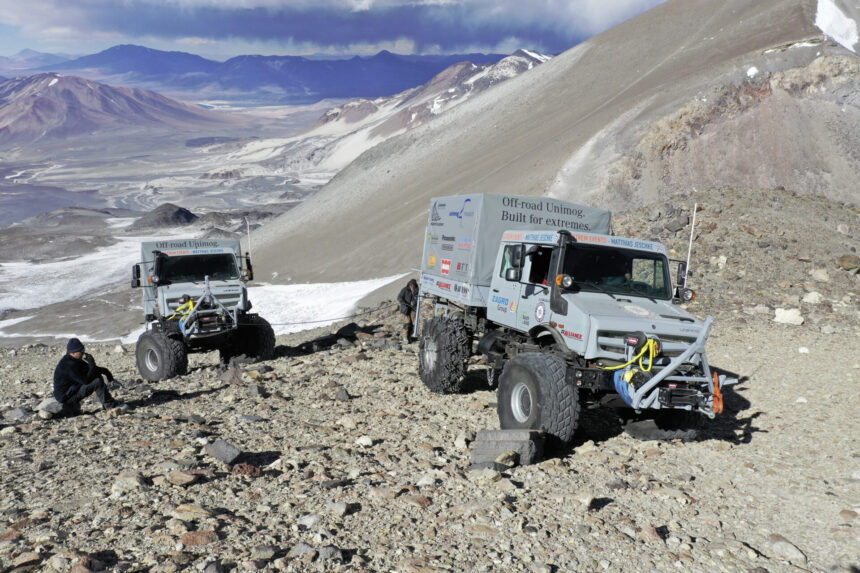 A pair of Mercedes-Benz Unimogs have set a new absolute world record for altitude for wheeled vehicle. The trucks, part of an expedition to install a radio system, climbed to almost 22,000 feet up the side of the world’s tallest active volcano.

In case you’re unfamiliar with the Unimog, it’s essentially an all-purpose workhorse that makes the Mercedes G-Class look like a Range Rover Evoque. The enormous Unimog, built by Mercedes-Benz since 1951, is intended to go as far as anything with wheels can go, along with whatever equipment is needed when you get there — the original design was meant to head deep into forests and then provide power from its engine to agricultural machinery.

The modern Unimog serves all sorts of weird and wonderful purposes. You can see them dragging planes around (usually German) airports, acting as firefighting vehicles deep in inhospitable terrain, and conducting earthworks. Unimogs have even accidentally won the Dakar Rally’s truck class a couple of times while acting as support vehicles for car and bike entries.

They’re also used for scientific research in extreme terrains, and that’s how the Unimog came to break the altitude record. A ten-strong team from Extrem Events, lead by Matthias Jeschke had the job of installing emergency radio units in camp locations around the Ojos del Salado in Chile. The mountain, whose name translates to ‘Eyes of the Salty One’, is the tallest active volcano in the world, peaking at 22,615 feet (6,853m) and the second-tallest mountain of any kind outside Asia.

As a result, and due to its position on the east edge of the Pacific Ring of Fire, it’s an important peak for both scientific research and for mountaineers. There’s several camps around the volcano to provide a haven and stopping-off point for people venturing there. After installing the radio units at the Amistad camp at 20,000ft (6,100m) back in December, the Unimog team set off to climb as high as possible.

High altitude driving is tricky. Vehicle engines are essentially air pumps that explode a bit of fuel in the process — in normal conditions, a gasoline engine will require almost 15 times as much air as fuel. However, as you ascend further on higher terrain, the more the air pressure drops. At 20,000ft, the air pressure is less than half what it is at sea level, and that has a dramatic effect on how well engines can operate — to say nothing of how easy their drivers find it to breathe.

The U5023 Unimogs used in the expedition have a 5.1-liter turbodiesel good for around 230hp and 665lbft at sea level, but even they’d suffer at high altitude. However, the trucks climbed to an incredible 21,962ft (6,694m) before reaching their limits — and both units achieved the feat — to set a new world record.

Of course Ojos del Salado has another 1,653ft left to climb, and around 200 taller mountains worldwide, so no doubt someone will come along to move the mark higher still. Watch this space…

Mercedes-Benz
22 Comments Discuss this post in our forums...
Test Your Badge Knowledge With Our Car Logo Quiz