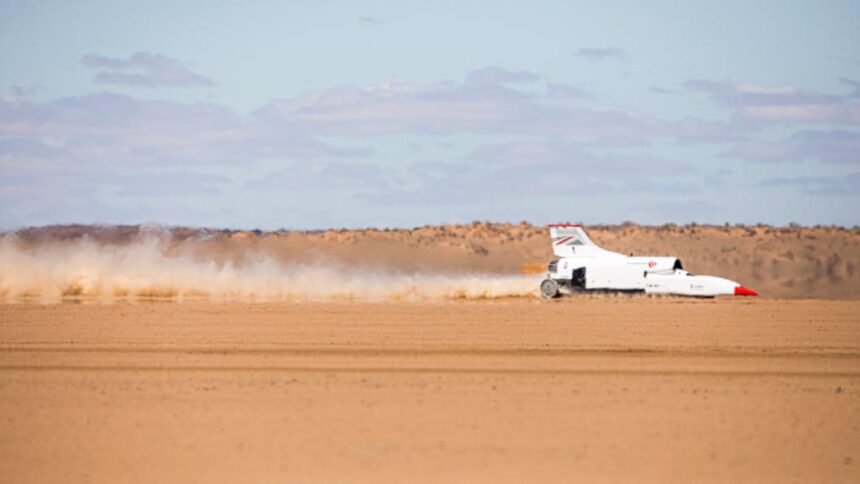 When the Bloodhound project hit the skids in 2018, we were a bit disheartened to say the least. Alongside using the latest technologies, and actually inventing more, to create a car to drive to Mach 1.35, it stood to be the most public feat of extreme engineering the world has ever seen.

Bloodhound was more than a car, it was an educational mission. The Bloodhound team, much like the Thrust SSC team before it, used the project to drive interest in STEM — Science, Technology, Engineering and Mathematics — in schools. On top of that, the Bloodhound team planned to live stream the car’s record attempts and runs from cameras all around the car.

Fortunately, Ian Warhurst rescued Bloodhound in the nick of time. The STEM part of the project still operates under Richard Noble, formerly the world’s fastest driver with Thrust 2 and the driving force behind both Thrust SSC and Bloodhound, and the car is at this very moment back in action.

The Bloodhound LSR car, as it’s now known, is undergoing its first powered desert runs in South Africa right now. Part of that is to test the track — a ridiculously vast civil engineering task undertaken by the local population — and the car as its speeds increase, but the team is also testing out those onboard cameras. That means that, for the first time, we get the pilot’s view of what it’s like to drive the fastest car ever conceived.

This footage shows front, rear, cockpit, and cockpit-360 video of Andy Green’s shakedown drives in the hybrid jet-rocket car. For now, the team is taking it slow, measuring the pressures around the car to determine how it behaves as compared to the computational fluid dynamics (CFD) models. They’re also looking at various functional parameters, such as crosswinds.

Green is hit by one such crosswind in the early part of the first run. Measuring 19kn — about 21mph — the gust generates an enormous yaw in the car that almost pushes it out of its 10-yard wide lane, before Green countersteers it back on course. Unsurprisingly, he remarks he’d rather not drive in that kind of wind again.

After that, we’re treated to full reheat on the jet engine, originally used in a Eurofighter Typhoon multirole fighter jet. Although Green only engages the reheat for a few seconds — to test how the system shuts down and the car’s rolling resistance — it’s enough to shove the 14,000lb Bloodhound to 334mph in just 20s from rest. For reference, that’s 50% quicker acceleration than a Koenigsegg Agera RS, but on a desert floor.

Bloodhound will continue desert testing over the next few weeks, increasing speeds to a planned 500mph — at least at first. In this configuration, the car is only good for about 800mph or so, but if all goes well it’ll return to Hakskeen Pan next year with the rockets required to move into four-figure territory.

Bloodhound SSC
116 Comments Discuss this post in our forums...
Test Your Badge Knowledge With Our Car Logo Quiz