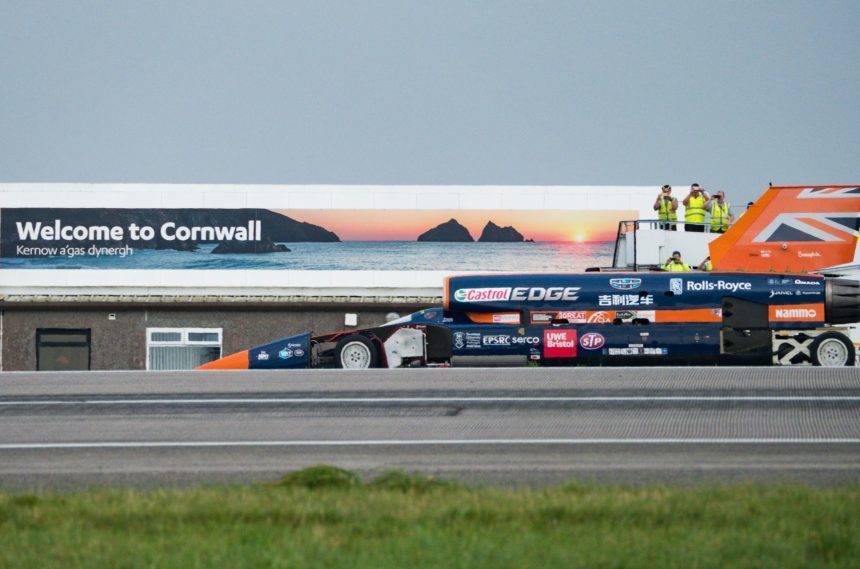 The 1,000 MPH Bloodhound SSC Aces Its First Trials in the UK

What is without a doubt the fastest motorsport on the planet, land speed racing is among our favorites. When cars eclipse 600mph it’s nothing short of impressive. Now the UK team known as The Bloodhound Project finally looks to take land speed records to another level.

It’s the team that already holds the world land speed record. Project head Richard Noble drove his own car, Thrust 2, to 633mph in 1983. He then lead the Thrust SSC project, to break the sound barrier on land in 1997, with that twin-jet car driven by RAF pilot Wing Commander Andy Green. The duo, as well as aerodynamicist Ron Ayers, have reunited to move their own 763mph record on further. A lot further, to what they think could be an unassailable 1000mph. This would make it the fastest vehicle of any type below a two mile altitude.

Their car, the Bloodhound SSC, is truly one of a kind. Named for Ayers’ Bloodhound surface-to-air missile from 1958, the team describes the car as the most complex ever built, containing some 3,500 parts and 22,500 rivets.

Main power comes from a jet engine that also powers the Eurofighter Typhoon. The EJ200 engine is extremely powerful and capable of producing 20,000lb of thrust. At full power, it can push the Bloodhound SSC to around 650mph. Impressive in its own right, but not record-breaking.

To propel it to a new record, Bloodhound will use rocket motors. Built by Norwegian company Nammo, there’ll be two specifications. The first will be used for what the Bloodhound team told us would be a “cruise” up to 800mph. This is a simple monopropellant rocket, using high test hydrogen peroxide (HTP). For the later, flat-out run in 2020, the car will use a cluster of three hybrid rockets. 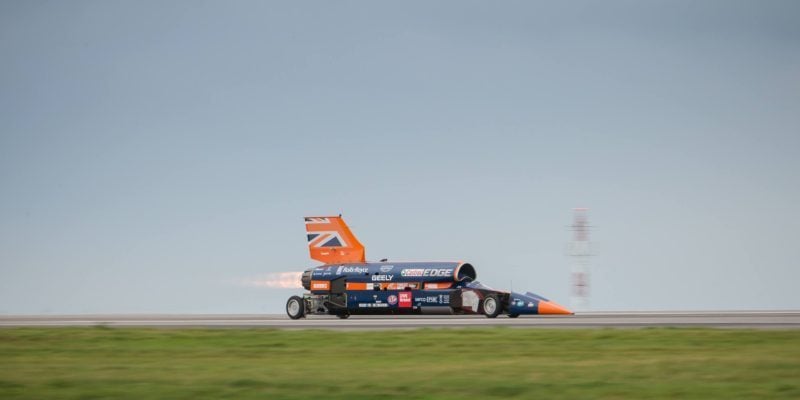 In the final 1,000mph+ setup, the rockets will add another 20,000lb of thrust. When all the engines are working together, the Bloodhound will have the equivalent of 135,000 horsepower. According to the team, that’s six times more power than an entire F1 starting grid.

Just in case two engines weren’t enough, Bloodhound also uses a third. This is a simple, supercharged V8 Jaguar petrol engine. It’s not there for power, but to act as a fuel pump for the rocket motors.

Weirdly enough the controls of the car are fairly standard. There’s a brake and accelerator pedal located on the floor and there’s a steering wheel to keep the car straight. Although if Green has to use it much at 1,000mph it’s probably not going well. Fortunately he also has a five-point safety harness… 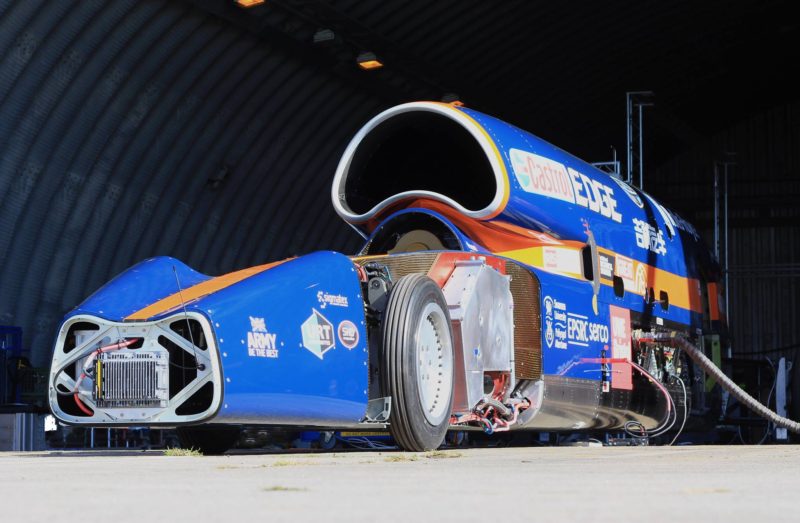 The rocket design is yet to be finalized, but testing for the car has already started. Its first public run was at Cornwall Airport Newquay, in the UK, on October 26, with further runs over the following days. Using the jet engine only, and rubber tires (the land speed car will use four forged aluminum wheels), the five-ton Bloodhound managed 210mph down the 9,000-foot runway and the test was deemed a success.

Further testing will continue over the next couple of years with speeds increasing every run. Next year the team hopes to hit 650mph on just jet power. Then in 2019, it expects to hit 800mph with the first set of rocket engines. Finally, in 2020 the team is shooting for the 1,000mph run.

Since there isn’t anywhere in the UK where those speeds are obtainable, the team will travel to the Hakskeen Pan in Northern Cape, South Africa. Previous world record attempts favored the Black Rock Desert area of Nevada, but Bloodhound is so excessively fast that Nevada is no longer flat or long enough to suit. In collaboration with Swansea University, the team identified over 1,000 suitable locations with a 10-mile straightaway, before narrowing it down to 14 with the help of the Space Shuttle.

Hakskeen became the preferred candidate due to its size, location and atmospheric characteristics, but it too needed work. It was originally deemed unsuitable due to a dirt road across the pan, but this was replaced with tarmac road at one end, giving it the length required. Then, in a project almost as vast as designing and building a 1,000mph car, a volunteer team of 300 locals spent three years hand-clearing stones from the alkali flats. The crew cleared an area more than a quarter of a mile wide, and over 12 miles long — equivalent to a straight two-lane road from New York to Denver.

Bloodhound has been in the works for nine years, enduring numerous mis-steps, funding shortages and redesigns. Now the car has turned its wheels in anger — or at least mild distate — for the first time, the record is suddenly in sight. It’s already an impressive feat of engineering, and we can’t wait to see what the team can achieve over the next few years.