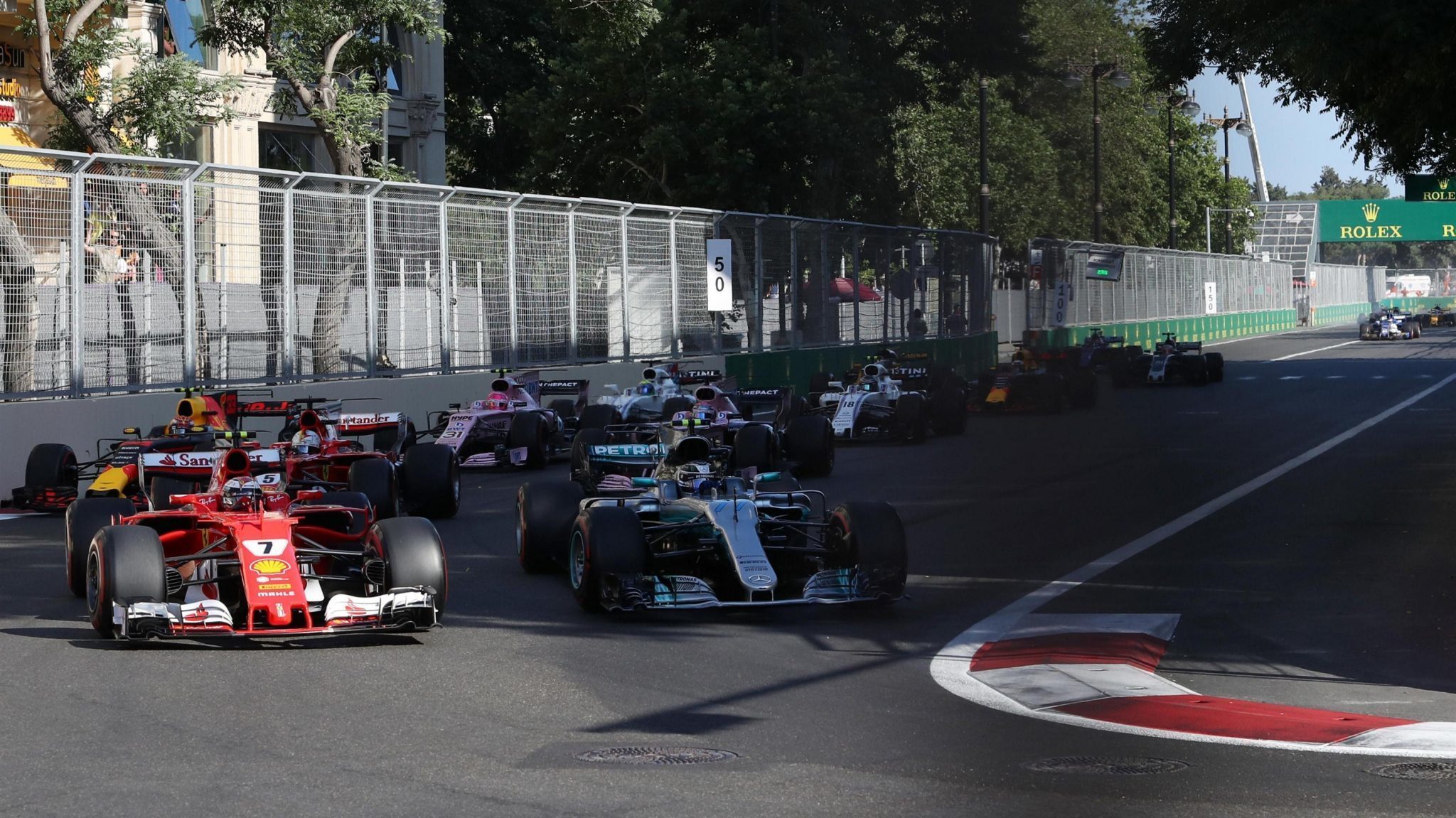 Heading into this Formula One weekend, the main narrative was tire trouble, with a continuous lack of grip around the streets of Baku. For today’s Grand Prix, that narrative took a nosedive in exchange for chaos.

If last year’s inaugural event was considered boring, this year’s outing put on the most exciting showing yet. This year’s Azerbaijan Grand Prix was amazing; we’ll even say it was the best Grand Prix of the season thus far.

Right off the line were there two separate incidents. The first involved Torro Rosso teammates Carlos Sainz and Daniil Kvyat, resulting in Sainz spinning heading into Turn 1. The second of these incidents had Ferrari’s Kimi Raikkonen mixed up with Mercedes driver Valtteri Bottas.

It was a wild opening lap that only served as a forecast of what would follow in the 51 lap race.

Hamilton vs. Vettel Taken to Another Level

Hands down the most controversial takeaway from today’s event was an unlikely interaction between these two. Preparing to restart after the second safety car period, Vettel ran into the back of Lewis coming out of Turn 15.

With a damaged front wing, the German pulled alongside Hamilton to share his opinion on the matter. That disagreement quickly took a turn for the worse as Vettel butted wheels with the Mercedes.

Handed a 10-second stop-and-go penalty towards the end of the race, Sebastian feigned innocence on the matter. “When did I do dangerous driving?” he asked of his team. Ferrari responded, assuring him the matter is a discussion for after the race.

Hamilton’s Race Slips Away Due to Safety Padding

Before Lewis could relish Vettel’s penalty, his race had already begun its downward spiral. Controlling the race from jump street, and leading Vettel by nearly three seconds, it all came undone on Lap 29.

Oddly enough it wasn’t the incident with Vettel or track debris that did Hamilton in. The culprit was the cockpit head restraint padding, which protects the driver’s head from impacts. Negative pressure began lifting the padding heading into Turn 1.

Asked to secure the restraint on two occasions, Hamilton was forced to pit to resolve the issue. This unplanned stop shook Hamilton’s position, rejoining the race in eighth behind Vettel. Lewis fought his way up the grid order, ultimately finishing in fifth place. 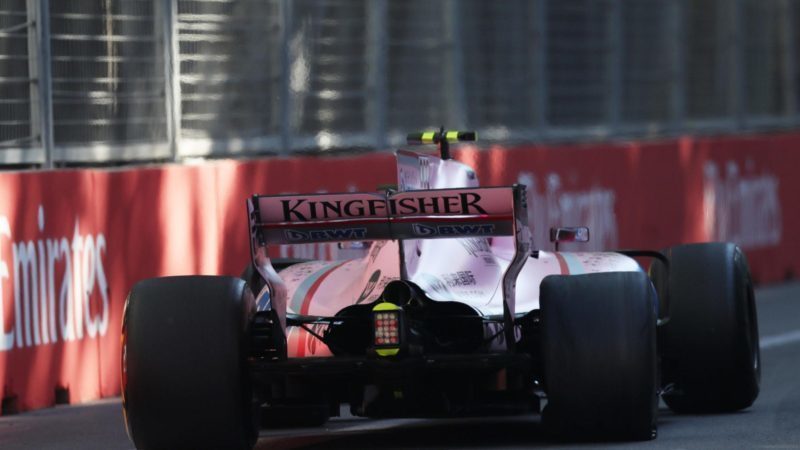 Frankly, who didn’t see this one coming? Esteban Ocon was the sole Force India driver to finish in the points after a collision with teammate Sergio Perez. Heading into Turn 2, the teammates drove side-by-side with a disastrous result.

While Perez was able to get back on the track, the effort was short-lived. Retiring on Lap 41 with a broken seat, it was an unfortunate end to his 37 race finishing streak.

The incident will no doubt be a sore point for the team, reminding them of what could have been, no different than the Canadian GP two weeks prior. Force India has to get a handle on the situation, and fast, if they’re looking to remain competitive.

A Lap Down, But Not Out

The driver of the day had to be Valtteri Bottas. Off to a rough start at the beginning of the race, Bottas collected fellow Finn Kimi Raikkonen heading into Turn 2. Both cars suffered damage, and Bottas limped the Mercedes back to the pit lane.

A lap down and in last place, Valtteri drove to an impressive comeback. The three safety car periods certainly played a part in things, but the Mercedes driver played his hand to perfection. On the last lap Bottas overtook Lance Stroll for second place by a tenth of a second. 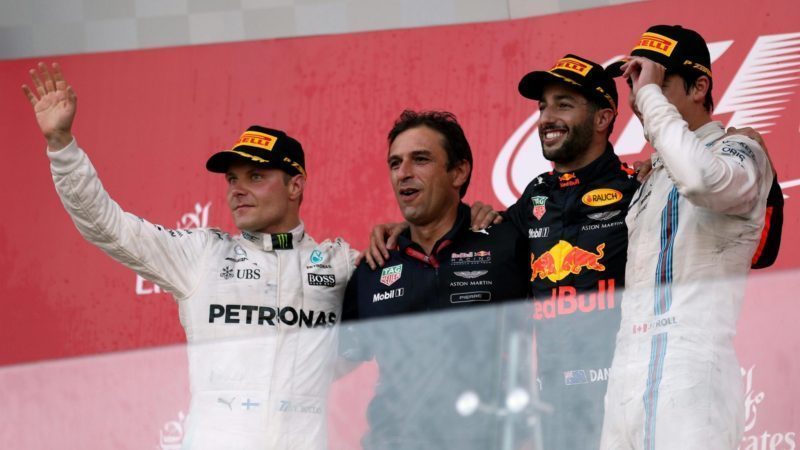 Red Bull’s Daniel Ricciardo also benefited from today’s non-stop drama. Essentially handed the victory through the on-track controversy of Vettel and Hamilton, the Aussie still fought until the end.

Dropping to 17th due to an unscheduled pitstop earlier in the race, Ricciardo reclaimed 10th before the first safety car. The ongoing chaos resulting in the next two safety cars contributed to the Australian snatching his fifth race victory.

At the end of it all, the unlikely trio of Daniel Ricciardo, Valtteri Bottas and Lance Stroll stood on the podium, proving Baku is as unpredictable as they come.

Stroll had an impressive showing, holding onto a podium finish and bringing Williams its best finish since 2012. Not to mention it was the rookie’s own first-ever podium, a feat sure to make up for an otherwise lackluster showing two weeks ago.

Sebastian Vettel and Lewis Hamilton settled for fourth and fifth, respectively. Needless to say, the next handful of races are going to be interesting between the two. Esteban Ocon and Haas driver Kevin Magnussen brought it home in sixth and seventh.

Fernando Alonso secured McLaren’s first points of the season. After being robbed time and again by Honda’s unreliable engine, taking home ninth certainly must’ve been a feel-good moment for the Spaniard.

Haas’ Romain Grosjean rounds out the top ten finishers of today’s race, continuing to score points for the American team.