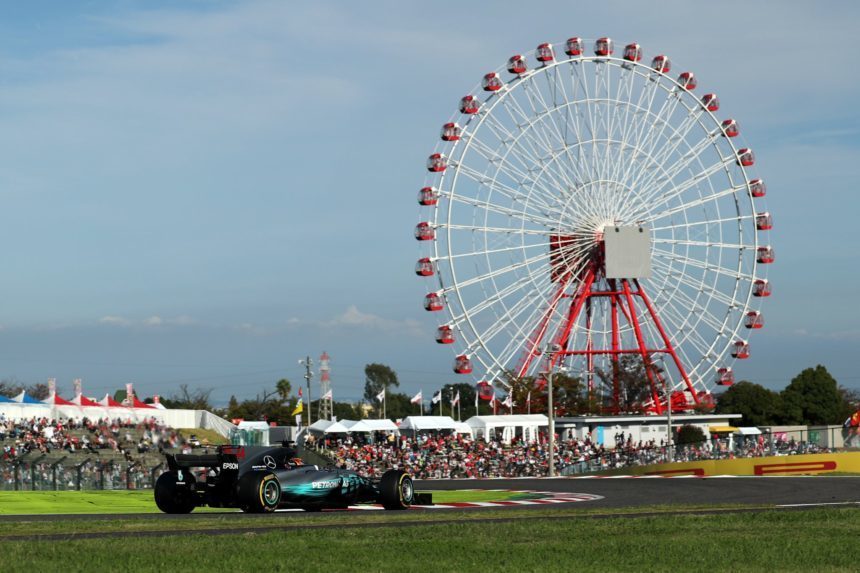 The Japanese Grand Prix, whether it’s at Fuji or Suzuka, always seems to throw up some drama. The stage was set for a terrific race today. The championship leader Lewis Hamilton started on pole for the first time in Suzuka, setting a new lap record yesterday in Qualifying. Beside him, Sebastian Vettel — ready to fight back and grab an all-important victory. Over thirty points adrift, the German needed a strong race to get back into the title fight.

But thirty points adrift wasn’t enough as Ferrari and particularly Sebastian Vettel’s woes continued. The engine cover was off on the grid before the start as Vettel’s mechanics franticly tried to diagnose an issue. It turned out a faulty spark plug was causing problems for the four time world champion.

His mechanics thought they fixed it but after the race start, Vettel was being eaten alive by the other drivers. He dropped from second to sixth in one lap with a severe lack of power. His car was so slow that it probably wouldn’t pull the skin off a rice pudding.

On lap four, Ferrari decided to stop the bleeding and Vettel came into the pits to retire. This isn’t how the fans or Lewis Hamilton wanted the championship to go — likely decided on Ferrari’s poor reliability.

Lewis Hamilton won the race — another dominating performance for his eighth win of the year. Max Verstappen pressured Lewis later on after the Mercedes driver was complaining of vibrations coming from his power unit. Daniel Ricciardo finished third to make it a double podium for Red Bull — a team that is certainly on the rise as this 2017 season enters its final leg.

The vibrations emanating from Hamilton’s power unit could be a factor at the next race in the USA. Some parts may need to be changed resulting in a grid penalty for Hamilton. Nevertheless, the British three time world champion is so far ahead in the title race that any engine penalties shouldn’t hinder him too much.

It was the final race for Jolyon Palmer at Renault. Carlos Sainz — the man replacing him at the next race in the USA — was also driving his last race for Toro Rosso. Sainz’s final race for the Italian team ended before it had even began as he spun out on lap one into the barriers, prompting an early but insignificant Safety Car. Sainz’s move to Renault is big news. It’s the first time a Toro Rosso driver will move to another team that isn’t Red Bull, or be kicked out of the sport altogether.

The first half of the championship between Vettel and Hamilton was one of the best we’ve seen. But ever since Vettel’s crash in Singapore, a title battle we wanted to see go down to the wire will likely be decided on faulty machinery.

Sebastian Vettel is a colossal 59 points behind Lewis Hamilton with just four races to go. Lewis could retire from two of those races and still be leading the championship by nine points. If Hamilton wins in the USA, Sebastian Vettel has to finish fifth or better to stay in the hunt. It’s not over until the fat lady sings, but the final curtain is certainly starting to come down on this 2017 season. 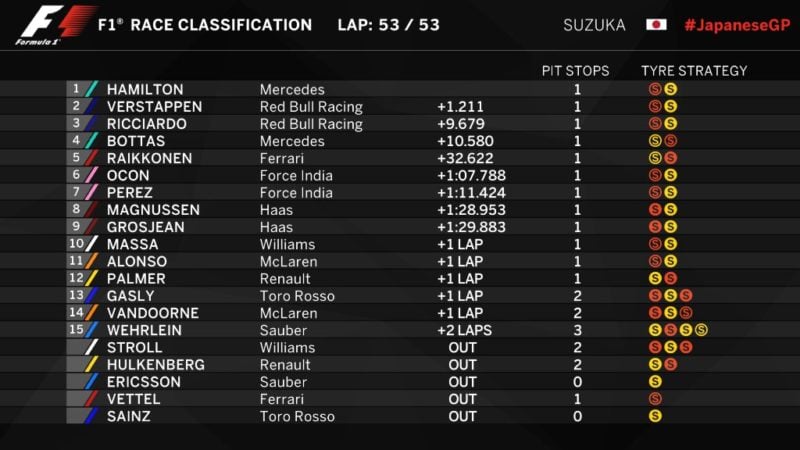 F1 2017 SeasonSuzuka
168 Comments Discuss this post in our forums...
Test Your Badge Knowledge With Our Car Logo Quiz