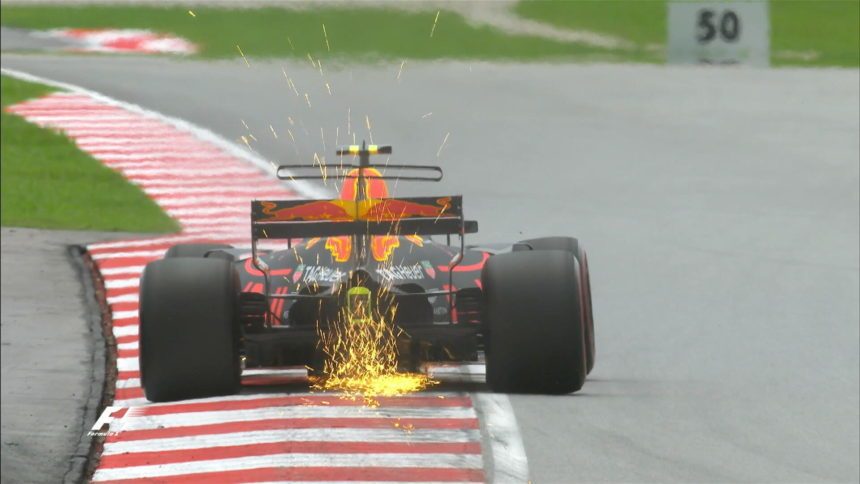 After 19 years of racing, this is the last time we’ll come to Malaysia for a Grand Prix. We’ve seen some ups and downs, some great races and some controversy. After today’s qualifying session it’s shaping up to be an interesting last hurrah, a final F1 flourish in the sweltering Sepang heat.

An engine scare from Sebastian Vettel’s Ferrari in Practice 3 this morning meant he was on the back foot going into qualifying. An engine change that normally takes four hours took the Ferrari mechanics just two. It was a great effort to get the team’s number one man into qualifying.

Lewis Hamilton also had a shaky P3. The new aero upgrades that Mercedes has brought to Malaysia weren’t working so Lewis reverted back to the old spec. His team mate Valtteri Bottas opted for the new aero package.

Vettel did indeed make it onto the track during qualifying but a suspected turbo issue meant he came right back into the garage with a lack of power. His mechanics tried to fix the problem but it was to no avail. Sebastian Vettel — the man who was a candidate for pole today — will start from the back of the grid tomorrow.

After the turmoil and retirement in Singapore, this was the last thing the four-time world champion needed. The positive is that by starting at the back, Ferrari will be able to fit new engine parts to Vettel’s car without a penalty, thus avoiding taking a hit later in the season. Rain is expected for the race tomorrow — probably Sebastian’s best chance at a podium finish.

New boy Pierre Gasly — debuting in Daniil Kvyat’s place at Toro Rosso — starts 15th. His team mate Carlos Sainz starts only a tenth ahead of him in 14th. A solid effort by the rookie Gasly.

Kimi Raikkonen in the other Ferrari looked the favorite to take pole but it was Lewis Hamilton who came out of nowhere to snatch it. Only four hundredths of a second separated the two drivers. It’s the Englishman’s 70th pole in Formula One as he continues to rewrite his own record. With his title rival Sebastian Vettel 28 points behind and starting at the back of the grid, Hamilton will be looking to play it safe in the race.

Birthday boy Max Verstappen starts third with his team mate Daniel Ricciardo beside him on row two. Both McLarens surprisingly made it into Q3 around a Sepang Circuit where power is paramount. After what happened in Singapore, the fast-starting Verstappen will be hoping to avoid Raikkonen’s Ferrari on the run down into the tight turn one.

You can find the full results from today’s qualifying session right here.

F1 2017 Season
211 Comments Discuss this post in our forums...
Test Your Badge Knowledge With Our Car Logo Quiz