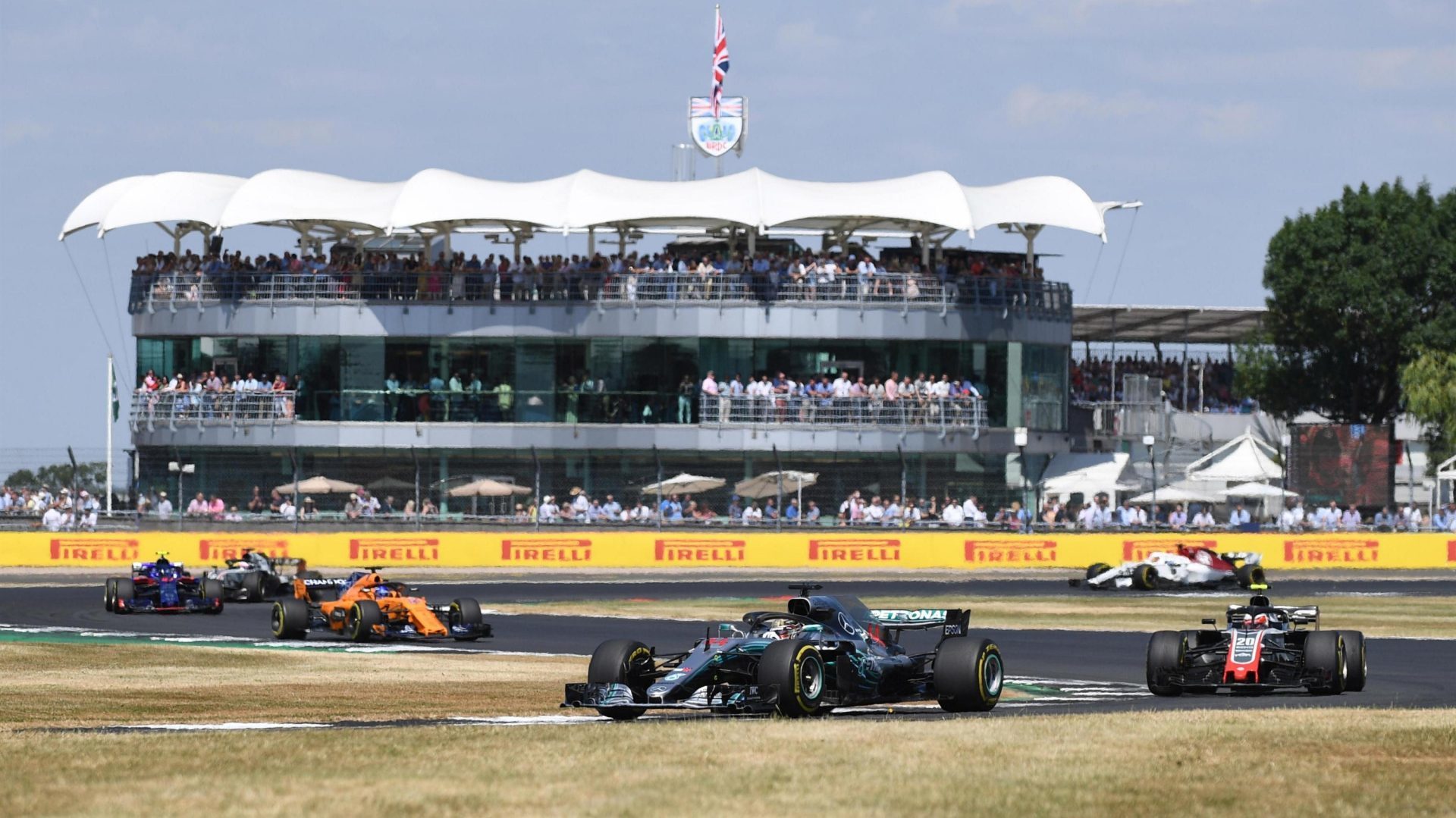 In the midst of football mania, the F1 circus descended upon the home of British motor racing this weekend. While the future of Silverstone’s F1 hosting duties remains unclear, this year’s British GP surely showed it can put on an entertaining race.

Sebastian Vettel took the victory in today’s race with a faultless drive for Ferrari. With his 51st win, he draws equal with “The Professor” Alain Prost as the third most successful driver. Even better, the German is the only driver to finish every lap and score points in every race in 2018.

He sits behind Lewis Hamilton with 65 wins, and Michael Schumacher with 91. Morever, he extends his championship lead by eight points over Hamilton, 171 to 163. Not a bad way to celebrate a race victory as F1’s first-ever triple header comes to a close. Behind him is Hamilton for Mercedes, and Kimi Raikkonen in the second Ferrari.

Chaotic from start to finish, today’s race was something to remember. 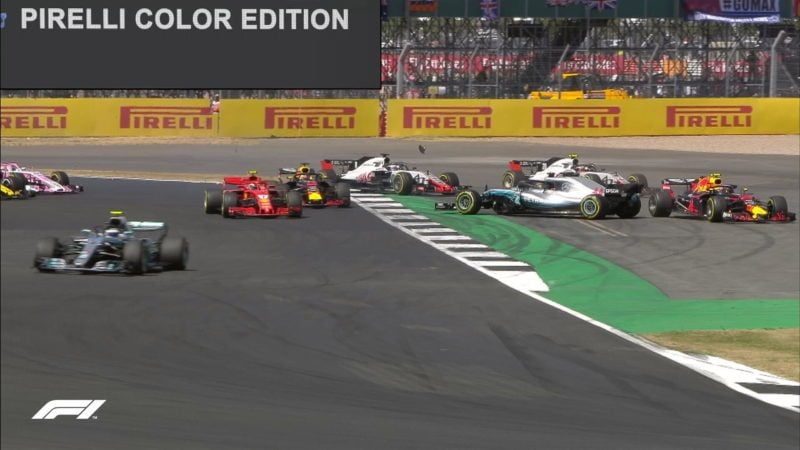 Vettel got off to a flying start off the line, jumping ahead of Hamilton for top honors. Bogging his start, the Briton would soon fall into the clutches of teammate Valtteri Bottas for third. Heading into Turn 2, the order of the top three was Vettel, Bottas, and Hamilton.

Unfortunately for the troubled Mercedes driver, things would take an unwanted twist. With Raikkonen looking to have a go, the two ran side-by-side into Turn 3 and it’s here where disaster struck.

The Finn out-braked himself and collected the Mercedes, sending it into a tailspin. While the Ferrari was able to get away from the incident in fifth, Hamilton fell to the back of the pack.

In the midst of all the commotion, Max Verstappen assumed third place for Red Bull. Daniel Ricciardo held off the Ferrari in the second RB14 for sixth in a short-lived affair. Raikkonen was already hot on his heels into Turn 6, but it wasn’t until Turn 8 where the Ferrari would make its move. 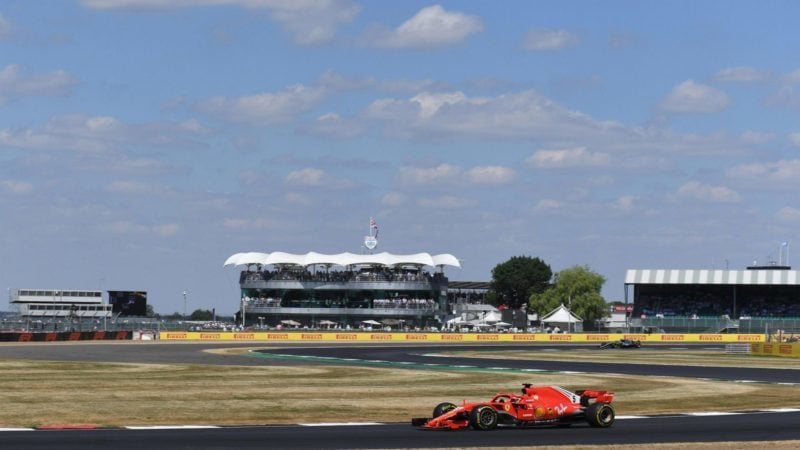 Flat-out through Turn 9’s Copse corner, the Ferrari would pull ahead with ease. Ricciardo would have another go before giving way through Maggots. Soon after, Hamilton had a word with the team, worried his car wouldn’t make the distance. Hopping on the radio once more on lap 2, Hamilton’s engineer assured him things were fine.

The same wouldn’t hold true for Brendon Hartley, retiring for Toro Rosso on lap 3. Not the most memorable weekend for the Kiwi, who missed qualifying due to suspension failure.

Things up front remained unaltered for the top three. Vettel drove into the distance with the Ferrari, building a six second lead over Bottas. As Raikkonen continued to pursue Verstappen for third, a 10-second penalty would come his way for the incident with Hamilton early on. 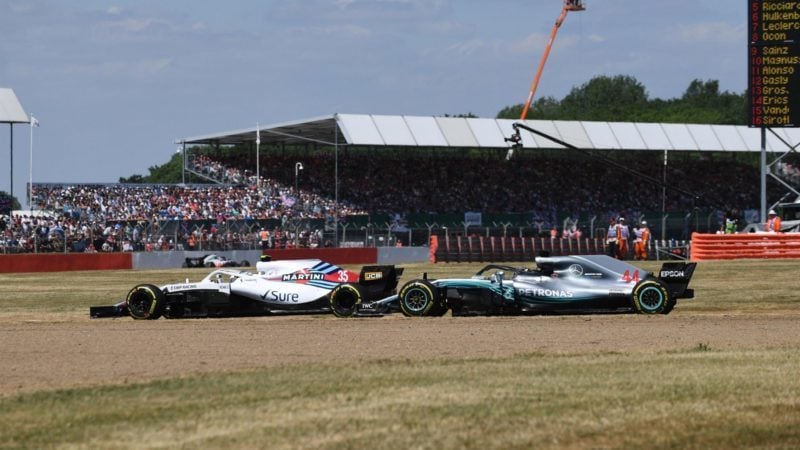 Speaking of Hamilton, despite many complaints to his team of the car feeling off, he’d become a man possessed. By lap 11, he’d already carved his way through the field up to sixth, some 15 seconds shy of Verstappen in third.

Raikkonen was the first to pit on lap 14 to serve his time penalty and a switch onto a fresh set of mediums. He rejoined the race outside the points in 11th behind Haas’ Kevin Magnussen. On fresher rubber, the Ferrari would overtake the Haas for 10th without much trouble.

Verstappen was up next for a fresh set of tires, coming into the pits on lap 18. With Ricciardo moving into third, Verstappen rejoined behind the Mercedes in fifth. Putting on his best performance of the season, Hamilton was in fourth, though he had yet to come in for fresh tires.

The second Red Bull came in one lap later, moving Hamilton into third. By now, Bottas was beginning to chew into Vettel’s lead as the Ferrari struggled with tires. The Ferrari driver would follow suit on lap 20, coming in for a fresh set of mediums. 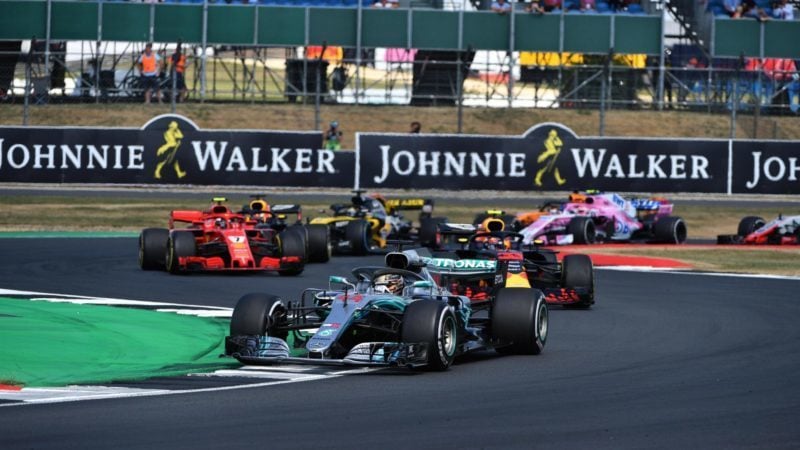 With Bottas now leading the race, Vettel returned to the race in second, ahead of Hamilton. The top three were now Bottas, Vettel, and Hamilton. The lead Mercedes took the pits on the following lap, giving the lead back to Vettel. Bottas got back onto the track in third behind Hamilton, who still hadn’t come in for new tires.

On lap 23, Hamilton let his teammate through for the second spot. He finally came in on lap 25 for the change, rejoining the race in sixth behind Raikkonen.

With 20 laps remaining, Marcus Ericsson had a scary crash into a tire barrier through Stowe. With the Swedish driver emerging unscathed, the damaged car prompted the Safety Car. This put Sauber out of the running completely, as teammate Charles Leclerc retired laps earlier. 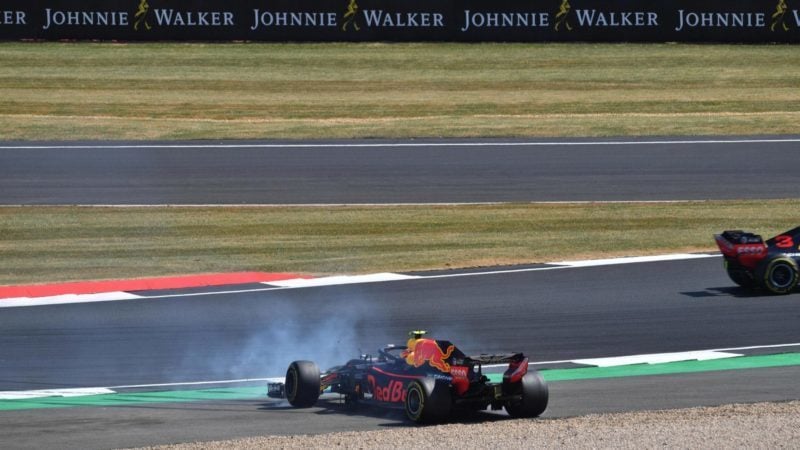 Vettel was quick to take advantage by heading into the pits for a brand-new set of softs. As Raikkonen came in alongside Verstappen, Vettel reemerged in second behind Bottas. With both Mercedes’ staying out, the order was once again Bottas, Vettel, and Hamilton in the top three.

The race resumed on lap 37, with Verstappen and Raikkonen rounding out the top five. Both men had a thrilling back-and-forth for position, though it was short-lived. Why? An incident involving Renault’s Carlos Sainz Jr and Haas’ Romain Grosjean prompted another Safety Car.

With the Safety Car’s second appearance lasting three laps, the race resumed with 11 remaining. Bottas was able to resist the charging Vettel until lap 47, where the Ferrari dived to the inside line. As the results prove, it was here that Vettel would remain until the end of the race.

Hamilton was able to sneak his way past a lap later for second on the grid. Raikkonen was able to blow past Verstappen, whose race had come to an end with a brake-by-wire issue. 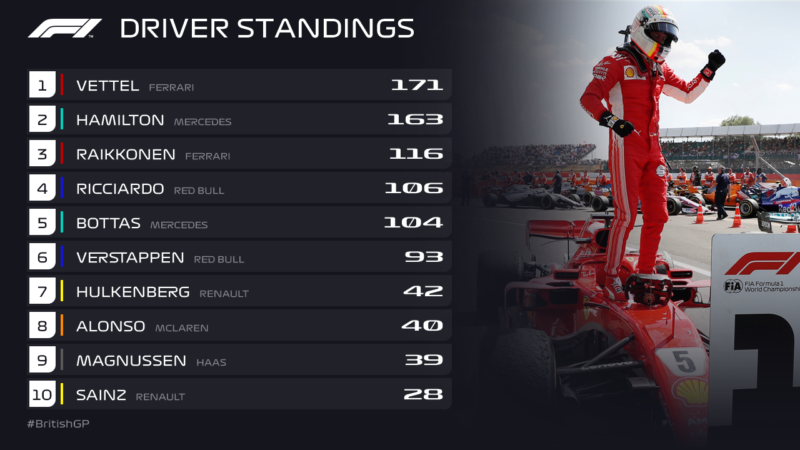 Raikkonen was able to work his way past his fellow countryman Bottas for third using DRS. It’s worth pointing out that all the overtakes on Bottas took place through the same corner: Brooklands. Despite this, the Silver Arrow Finn was able to stave off the charging Bull of Daniel Ricciardo for fourth.

Nico Hulkenberg took sixth in the sole remaining Renault. Esteban Ocon locked up seventh for Force India, and Fernando Alonso was able to get ahead of Magnussen for eighth.

While Pierre Gasly crossed the line in 10th, the position has since gone to Sergio Perez. The Toro Rosso driver fell victim to a five-second penalty for a collision with Perez. As a result, Gasly drops down to 13th behind Stoffel Vandoorne and Lance Stroll.

With a well-deserved break, the circus heads to Hungary for the eponymous GP in two week’s time on July 22. 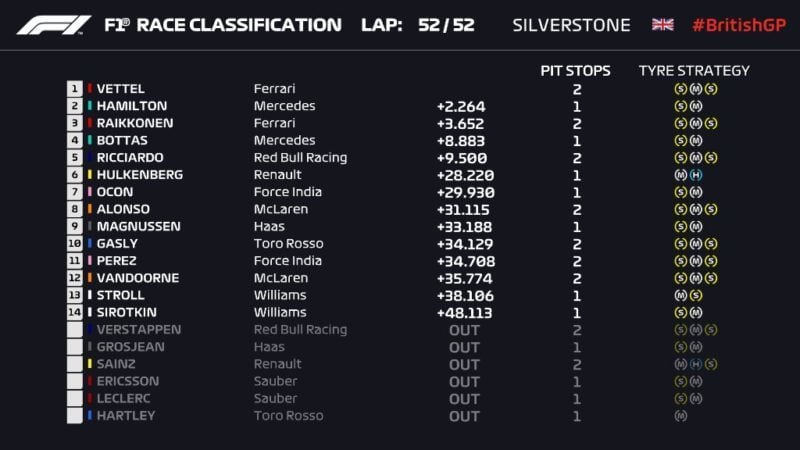