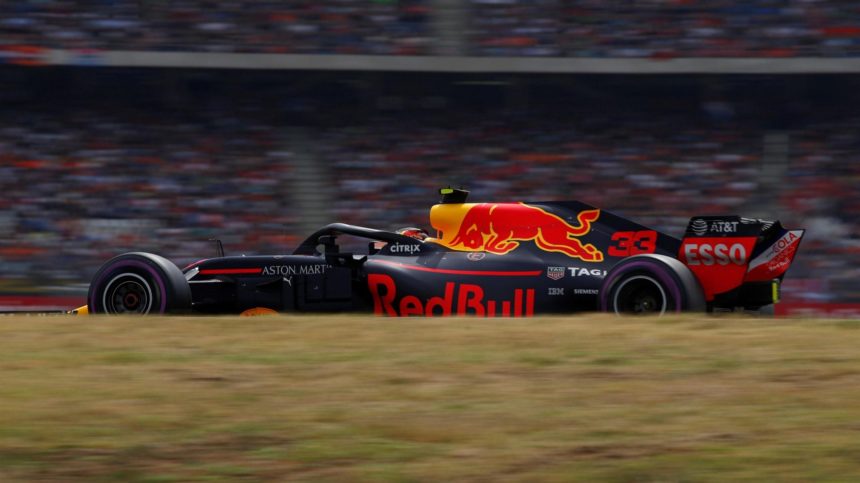 The F1 circus has returned from a short break, following its first-ever triple header. While the teams have had two weeks of well-deserved rest since Silverstone, qualifying for tomorrow’s German Grand Prix was anything but relaxed.

Sebastian Vettel earned pole position around Hockenheim today. Vettel proved the might of Ferrari by dashing Valterri Bottas’ hopes of top honors with a time of 1:11.212. The German secured the team’s 499th front-row start in his backyard. Moreover, the stellar performance will go down as Ferrari’s 218th pole position.

It was a fight to the finish between Ferrari and Mercedes in the closing moments of Q3. Bottas crossed the line with a blistering lap time of 1:11.416, much to the delight of Team Principal Toto Wolff. At the end of the day however, the Silver Finn settled for starting from second, 0.204s down. 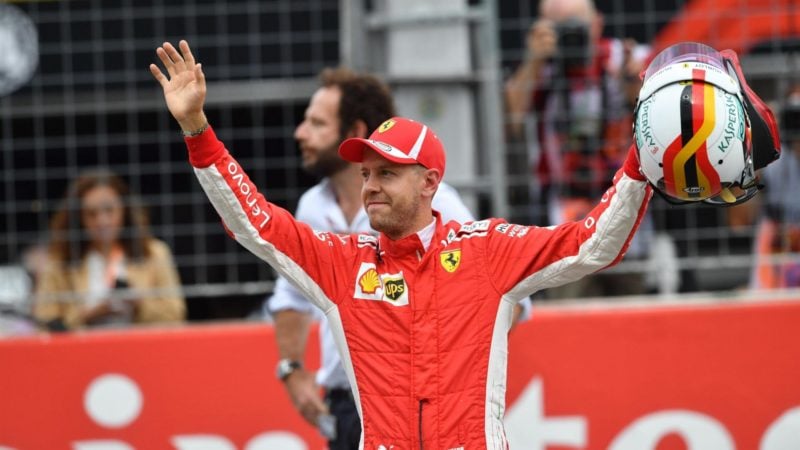 Starting from third in the second Prancing Horse will be Kimi Raikkonen. Had it not been for a momentary off, Raikkonen may very well have qualified higher up the order. As it stands, he was 0.131s down on Bottas. Despite the off, this is Raikkonen’s best starting position at the circuit since 2006.

Both Ferraris looked especially quick around the track. Tomorrow’s race start could spell immediate trouble for the Silver Arrow squad.

By now, you will have noticed the lack of Lewis Hamilton. The British driver fell foul to relegation in Q1. After posting the fifth fastest time of the session, tragedy befell the Mercedes driver. 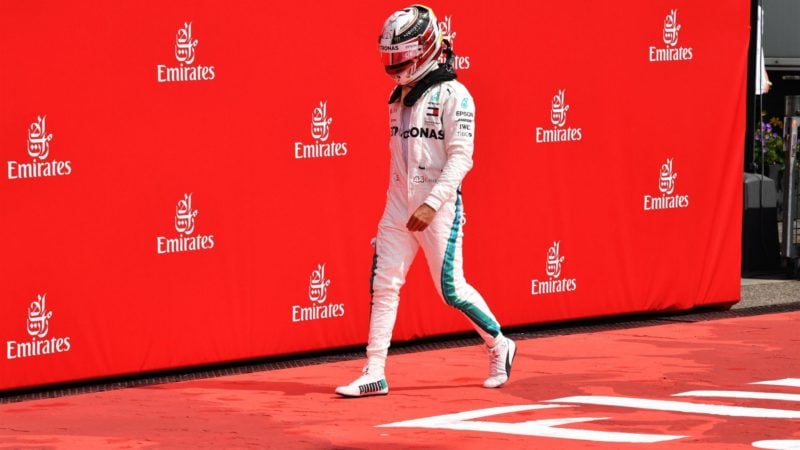 Hamilton hopped on the radio mid-way through a lap, telling the team the gears wouldn’t change. Stuck in fourth, the Brit would work to inch his way back to the pits but to no avail. Bringing the car to a halt on Turn 10, Hamilton immediately hopped out and tried pushing the car back to safety.

With the reality slowly dawning on Hamilton, he called it quits. The culprit? A loss of hydraulic pressure. The Mercedes driver is no stranger to woes at Hockenheim. In 2014, he crashed into the barriers through the Stadium section of the track. Starting from 20th, he worked his way up to third. Will he manage a similar charge tomorrow?

Starting from fourth is Max Verstappen for Red Bull, 0.275s down on the Raikkonen. Teammate Daniel Ricciardo won’t be so lucky as he’ll start from the back of the pack. Why? Penalties for using too many engine parts. The Aussie will take on a new MGU-K, part of the hybrid system, battery and control electronics. 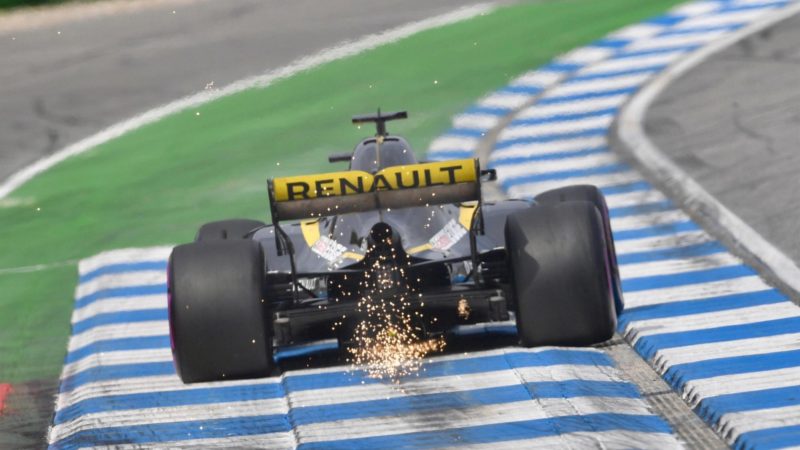 The good news, at least for the team, is the decision came about to do so now and not at Hungary. Red Bull expects to be more competitive at the Hungaroring, though as with all things, only time will tell.

Kevin Magnussen and Romain Grosjean will fill out fifth and sixth for Haas. Both drivers’ efforts put the cars into the top six for only the second time this year. The first was at Australia, which would later spawn its own controversy. Following best place finishes of fourth and fifth in Austria, it seems the American team is finally coming into its own.

Following Haas, Renault locked out the next row with Nico Hulkenberg and Carlos Sainz claim seventh and eighth for Renault. The Sauber of Charles Leclerc will start from ninth in tomorrow’s race. The Monegasque driver continued to impress in yet another Q3 appearance — three in the last four races, in fact. 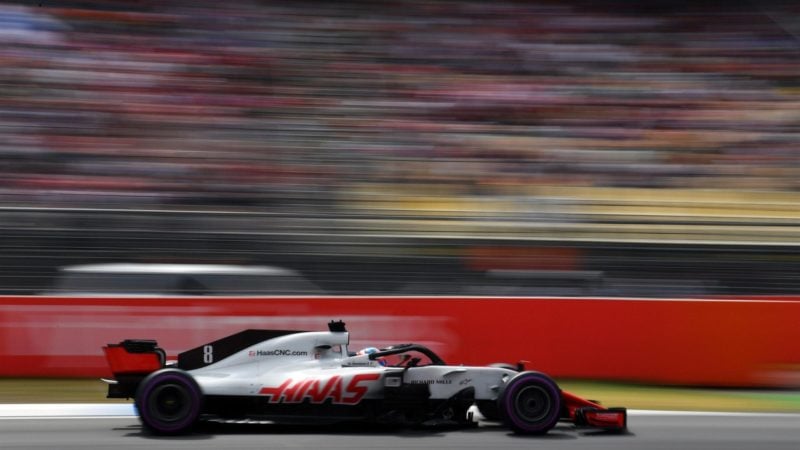 Sergio Perez rounded out the top 10 for Force India. Teammate Esteban Ocon wasn’t as lucky, and will start from 16th after falling to relegation in Q1. This will be the first time the French driver didn’t make it out of the first session since Monaco in 2017.

Tomorrow’s race is one of only two before heading into the summer break. With tension already high for the race, we’re willing to bet on a first lap meltdown of some kind. 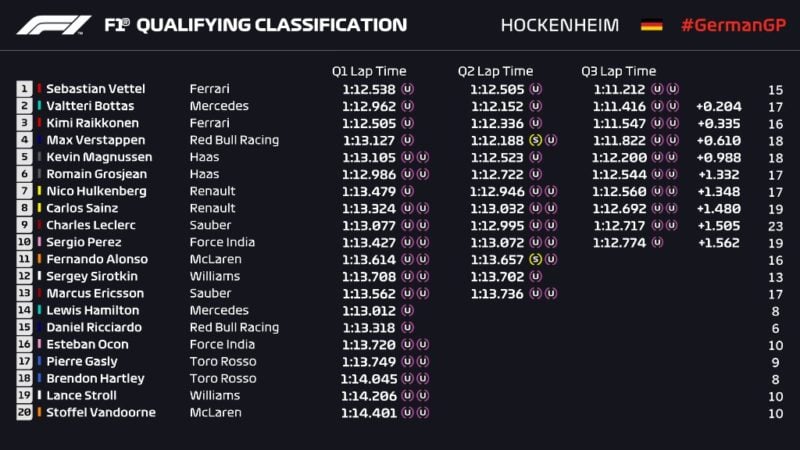 F1 2018 Season
350 Comments Discuss this post in our forums...
Test Your Badge Knowledge With Our Car Logo Quiz