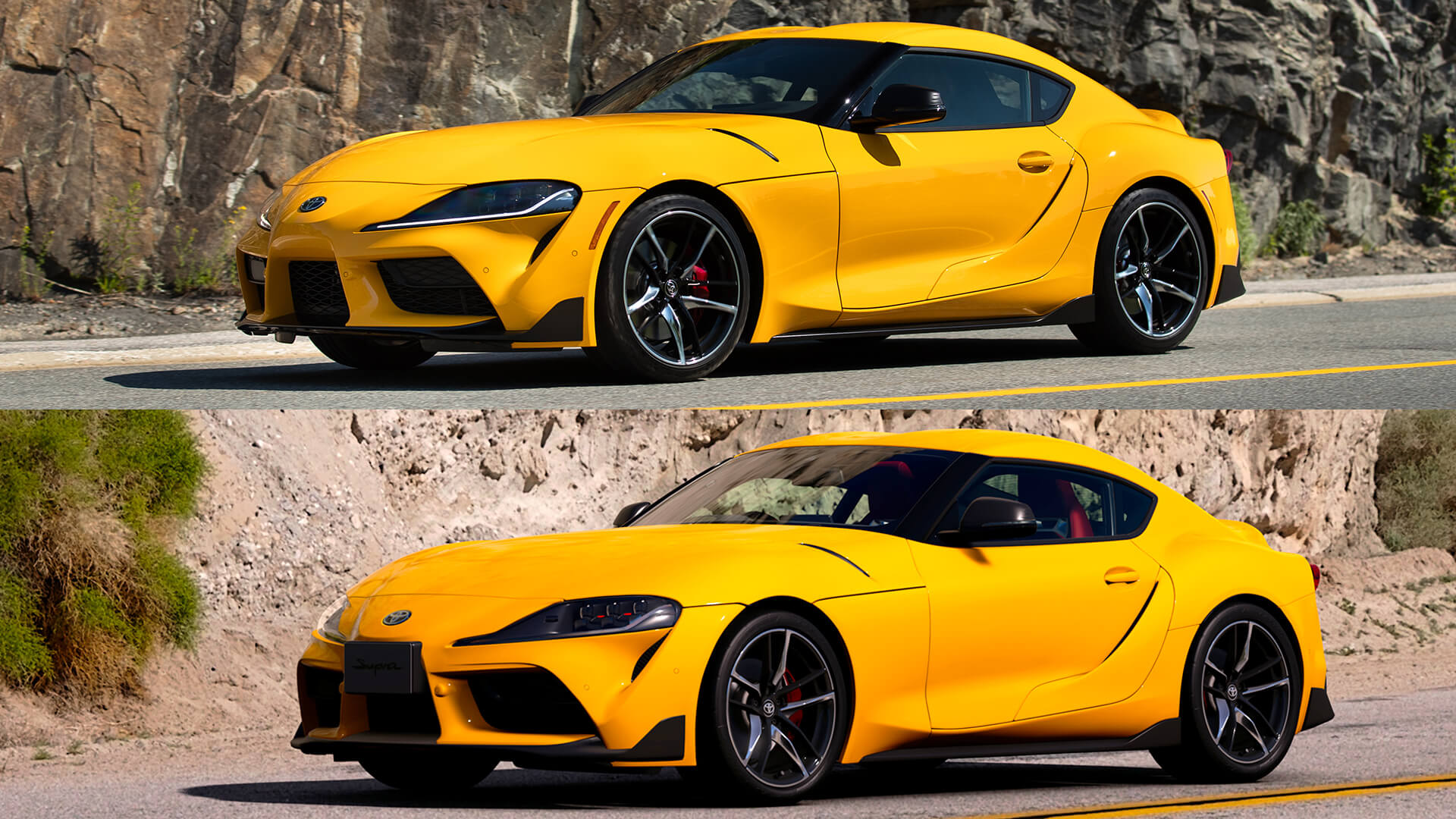 Earlier this month we drove one of the most anticipated new cars of the year, the 2020 Toyota GR Supra. But if you’ve been playing Gran Turismo Sport at all this year, you’ve had months to drive the reborn Supra already.

A brief timeline recap: the production Supra finally bowed earlier this year at the Detroit Auto Show. Not even two months later it landed in Polyphony Digital’s PS4 sim racer as part of update 1.34. 2018 saw a Supra race car show up, and the connection can even be traced back to GT6, where the FT-1 concept — which hinted at the eventual production car’s design — landed five years prior to the GR Supra.

So with rather surprising news that GT Sport players would help develop the new Supra, we’re comparing the real and the digital to see how close they really are. 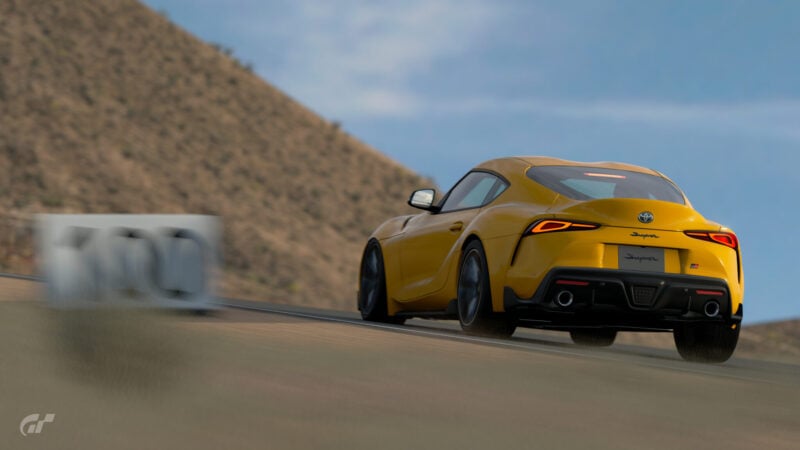 Toyota’s keeping things nice and simple with the GR Supra. At launch there’s one engine/transmission combo in most markets: the BMW-sourced 3.0-liter turbocharged inline six. Quoted figures are 335hp and 365lbft — Sport matches these, so job done.

However, it’s worth pointing out that the Supra is pumping out substantially more power than its spec sheet suggests. That’s not really a mark against Sport or PD, as this is hardly the only example of a car being underrated by the factory, but it’s a point of interest nonetheless.

The gear ratios match up in-game as well. In the real world your only choice for shifting duties are the wheel-mounted paddles of the eight-speed auto. In a game you can work with whatever sort of sim rig setup you have though.

Paint options span the entire range of real-world choices, and they’re quite accurate. The matte option has a bit of a satiny look in real life, and Polyphony’s artists have translated that faithfully here. Of course, we went for the yellow because it’s the best choice. The image up top needed some very slight color correction to match the press shot, but that’s it. The benefit of Scapes is that it looks like a photo because, outside of the car model, it is a photo!

The sound coming out of those two tailpipes is quite accurate too. Crackles accompany downshifts just like the real car — a decent amount, not overdone — though from far away in replays, its a mite higher-pitched than the fly-bys at Circuit Mont-Tremblant. If it sounds a little meatier from the interior camera than you’d think, there’s a reason for that: there’s a synthesizer that pumps engine noise into the cabin. 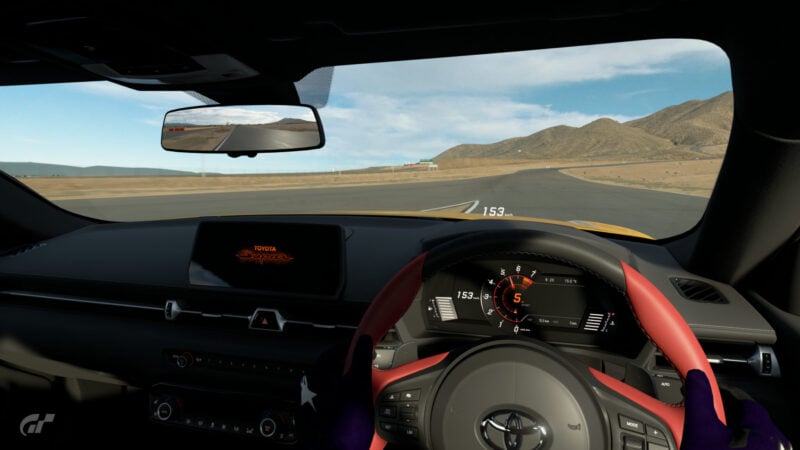 There’s one small catch with the interior of the Supra versus the one we drove: the steering wheel is on the wrong side. Whoops!

Market requirements aside, everything in the yellow digital car matches up with the white real-world item. But it shouldn’t, at least in Canada. That’s because the red interior that’s standard in Sport is limited to a handful of exterior colors here.

That’s a minor issue though, as the red may just be paired with other colors in other markets. More importantly, the architecture is all accurate. Everything, as Thom Yorke would repeat, is in its right place. We’re particularly fond of the heads-up display, though Imperial fans will be disappointed that it will only display km/h. 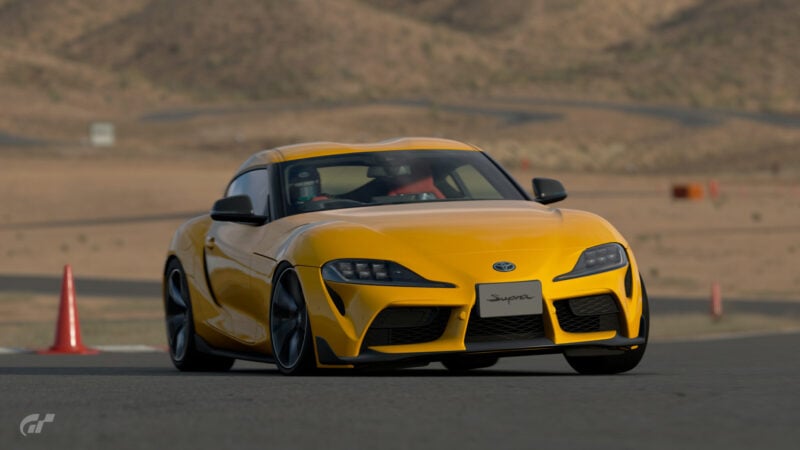 So the Supra of the digital world looks and sounds like the real thing. But how does it drive?

If you’ve read the last installment of this particular series (comparing the Veloster Turbo to its real-world counterpart) you can probably guess the answer. Largely it’s a similar experience, but there are important differences that sets GT Sport apart from the real thing.

We were lucky enough to drive the Supra on track, getting a better idea of how it performs closer to its limits than the road-going portion of the test could show.

The first major difference is how much the digital A90 leans in corners. Even at road-legal speeds, trail-braking into some of Willow Springs’ challenging corners pitches the nose far enough forward that it’d scrape body work. That’s on a flat surface too: even coming out of the tight downhill Turn 14 of Circuit Mont-Tremblant the Supra didn’t lean like the image above.

On track, we kept the driver assists on in the Supra. To be fair, we did the same in Sport. For game-wide approximations of these complicated systems, GTS’ ASM and TCS do a decent job. The ASM is a little more aggressive than the system in the real car. TCS is similarly heavy-handed in the default 3 setting, but knocking it back to 2 feels about right. It will flash up in second- or third-gear corners but otherwise leave you alone.

The strange thing about the ASM is that it allows for a brief bit of entry oversteer. The car quickly settles after that, but it’s that split-second feeling of dartiness in GTS that may have you winding off lock when you should simply wait for it to pass. This is more noticeable on the pad than the wheel.

Looking past that initial turn-in feeling, the rest of the Supra driving experience transfers over quite well. It feels taught, with a very neutral stance through faster corners. Ease off the throttle and the nose will tuck in nicely.

Riding shotgun with a pro in the real thing, we learned about what’s really possible on the limit. The A90 never felt ragged here, instead just dissecting the corners with a composed efficiency. We turn off all the aids and try the same at Willow Springs. The GT Sport Supra can get away from you if you’re not measured in your inputs, quickly feeling more than a little wild. Which seems fair really: we were riding with a pro that day, after all.

It’s hard to evaluate the feedback in a wheel versus the real car, because sim racers all have their own preferences. The genuine A90’s helm is quite light on feedback but very consistent and smooth, with a good amount of resistance. It’s possible to roughly match it via the Fanatec CSL Elite’s myriad settings, so that’s a plus point for the wheel at any rate.

Just like the Veloster comparo, the digital Supra’s tires are more prone to voicing their displeasure than the real 19-inchers. And just like then, we’ll chalk that up to the lack of seat-of-the-pants feeling in video games. Auditory clues are important when your internal g-meter is on the sidelines.

Convincing? Yes, mostly. Considering you can buy roughly 1000 copies of GT Sport for the price of one Supra, it’s certainly more than 1/1000 of the experience! 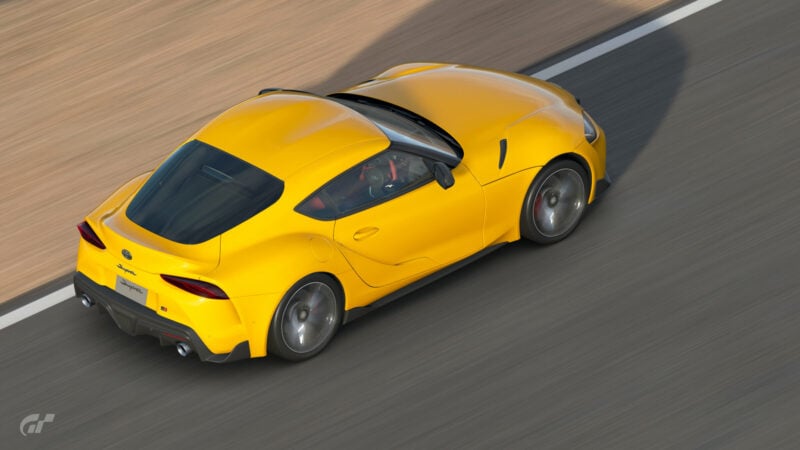 The good news is that yes, if you own Gran Turismo Sport, you can indeed get a taste of what the GR Supra is all about.

As ever, it’s not a replacement for the real thing, but Polyphony and Toyota have worked together to craft a convincing enough facsimile. And considering that this year’s allotments of the real thing have sold out in multiple countries, this just might be the only way you can drive one for the next little while, unless you’re one of those lucky buyers. In which case you should probably pick it up in GT Sport too, to drive it when (and where) you can’t!

See more articles on Gaming vs Reality and Toyota Supra.