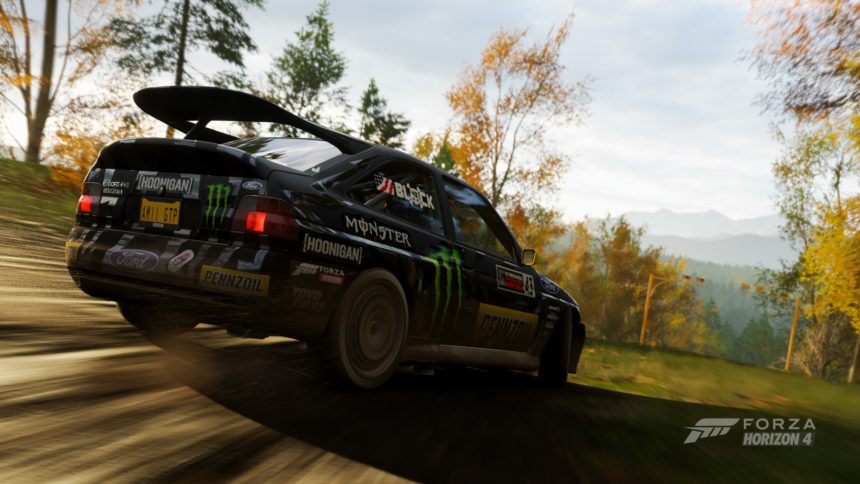 The beginning of November means a new batch of cars are coming to Forza Horizon 4. The latest pair of cars arriving in Britain come courtesy of specialist tire destroyers Hoonigan.

Joining Ken Block’s “Hoonicorn” Ford Mustang are a 1991 Ford Escort Cosworth and the 1977 Ford F-150 “Hoonitruck”. Both cars are set to star in Gymkhana Ten later this year.

The Hoonitruck is the wildest of the pair. Recently revealed at SEMA, the Hoonitruck is based on a 1977 Ford F-150 (or rather what’s left of one) and turned up to the extreme.

Housing a 3.5-liter twin turbocharged V6 under the hood, the Hoonitruck makes a ludicrous 914 horsepower. With so much power being sent to all four wheels, players should have a lot of fun pulling huge slides around UK roads.

The second car is the 1991 Ford Escort Cosworth. Based on the Group A rally car, the Cosworth looks tame in comparison to the Hoonitruck. This particular Cosworth however, is far from normal.

With a heavily modified 2.0 liter turbocharged engine from a WRC car, this Cosworth makes 620 horsepower. Sending power through a seven-speed sequential gearbox, the all-wheel-drive Cosworth should demolish dirt paths around the Horizon Festival with ease.

Both cars are available for purchase on the Xbox Store or as part of the Car Pass. Next week will see an Italian SUV and an insane Can-Am buggy arrive in the UK.

Be sure to stop by our Forza Horizon 4 forum section for more.

Forza Horizon 4 Car PassHoonigan
5 Comments Discuss this post in our forums...
Test Your Badge Knowledge With Our Car Logo Quiz