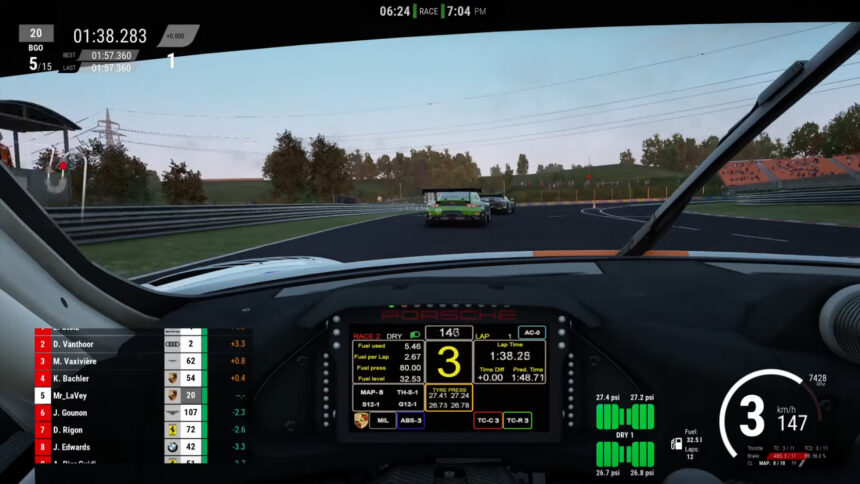 With only a few days to go until the June 23 launch date, the first console footage of Assetto Corsa Competizione emerged earlier in the week. Hot on the heels of that initial glimpse, 505 Games has published a new clip to show off the much-anticipated sim racer.

The new clip is a direct capture from the PlayStation 4 Pro, using the console’s own inbuilt Share function. It features the 2019 season Porsche 911 GT3 II R running a five-lap race around the Hungaroring circuit, starting with a live on-board view of the race itself. Following on from that there’s a chance to see the replay and replay interface in action.

While the PS4 Pro is capable of an 1800P video output (checkerboard rendered to 4K), this clip is running in 1080p mode. While using this option, PS4 Pro players benefit from a number of graphical tweaks over the regular PS4 — also in 1080p. These include greater draw distances, anti-aliasing, and particle and post-processing effects. The base Xbox One runs at 900p, with the Xbox One X able to output 4K with all the graphical enhancements of PS4 Pro.

In order to get ACC to run on consoles though, there are a few other compromises. Firstly, all console versions will run at 30 frames per second — as you can see from the clip above. In addition there’s a limit on car counts, with a maximum grid size of 20 vehicles.

These sacrifices do, however, allow the simulation physics engine beneath ACC — the important part — to survive intact, retaining its authenticity from the PC clip. Audio also appears untouched. There’s no word yet on whether the next-generation PS5 and Xbox Series X will allow for any graphical improvements when they launch at the end of the year.

You’ll be able to pick up Assetto Corsa Competizione on consoles from June 23. Pre-orders are still open, except for digital version on PS4 which will be available on June 23, with the IGTC pack available as a bonus through July 7.