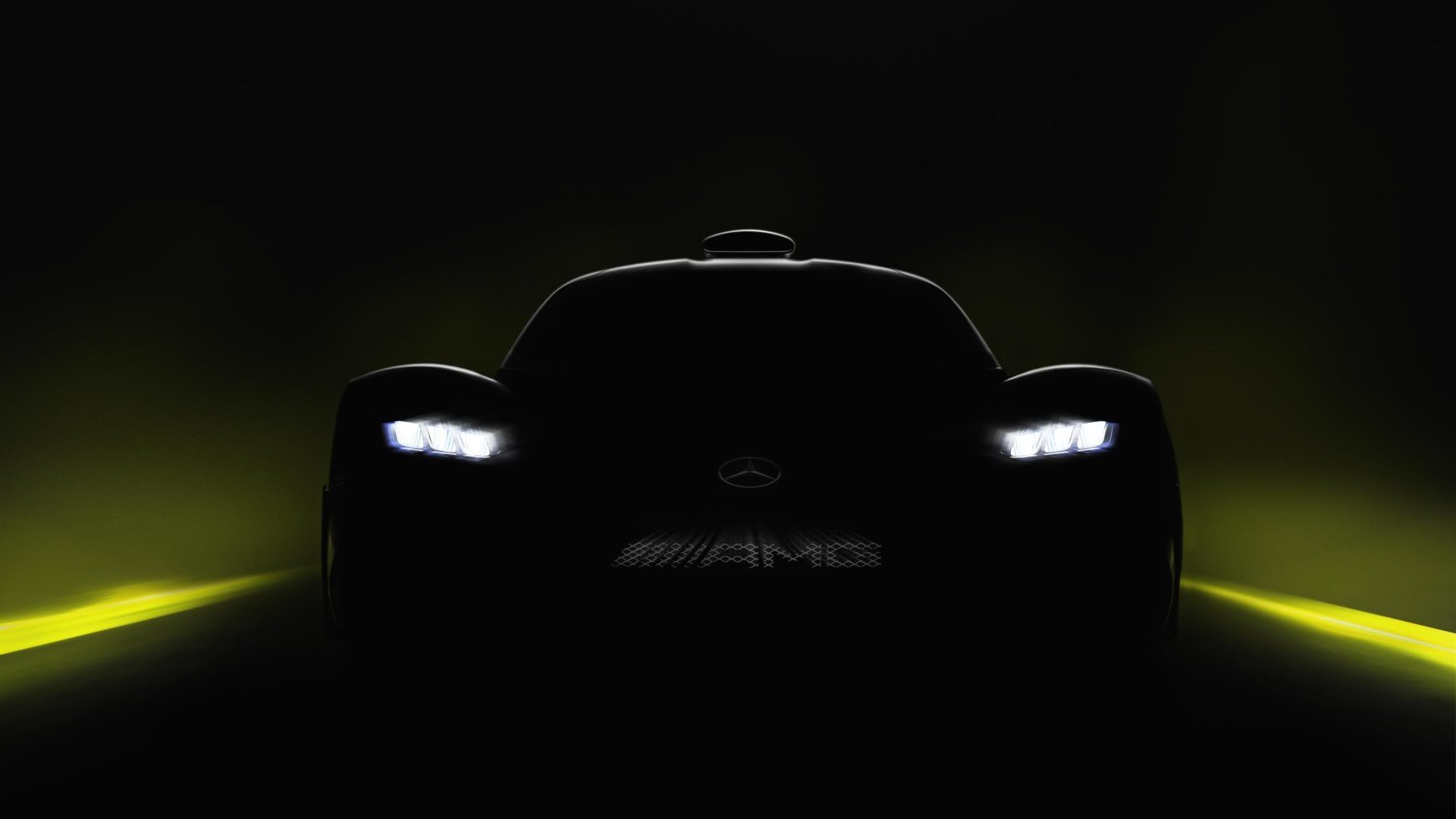 The Aston Martin Valkyrie is about to get some serious competition.

Mercedes is finally set to take the covers off its own F1-inspired hypercar at the Frankfurt Motor Show next week. Currently known only as “Project One”, this extreme performance machine takes the heart of the Mercedes Formula One car and places it into a road car.

We’ve not seen any more than teaser images to date, but they tell a slightly different story to Aston Martin’s effort. While the Valkyrie is arachnoid, “Project One” appears to be more conventional.

Despite an obvious roof-mounted intake and NACA ducts on the rear, the Mercedes car would appear to be a more traditional shape. In many respects it resembles some of the brand’s older concept cars — the C111 and CW311 particularly. We haven’t seen any detail shots yet however, so the precise shape remains a mystery.

The car’s engine is no secret though. It’s a full F1 set-up, just like that in the Mercedes-AMG W08 Formula One car, albeit reworked for user-friendliness. That means a 1.6-liter, turbocharged V6 petrol engine and hybrid power system. A kinetic energy recovery system (MGU-K) provides an extra 134hp under acceleration, while a heat recovery system (MGU-H) keeps the turbocharger spooled for rapid response.

There are some differences in the powertrain though. Unlike the F1 car, the road car has a pair of motors that drive the front wheels. With the help of the extra lithium ion batteries, this will give the Project One a pure-electric range of 16 miles.

All in, the car’s various power sources are good for over 1,000hp, driving an 8-speed automated manual gearbox.

Mercedes hasn’t revealed concrete final specifications, but the goal for the car was to stay under 2,200lb — for the magical 1hp/kg power-to-weight ratio. It has confirmed that the car will hit 218mph though.

Crucially, there are no plans to make a track version of the car. Mercedes is focusing on the Project One as an ordinary road car — which means you just need to fill it with fuel and keep the battery charged. And pay $3m to buy it, of course.

The covers are set to come off at the Frankfurt Motor Show next week.

Andrew Evans · Sep 6, 2017· Comments
Gran Turismo series partner Toyota has revealed a special, limited edition version of its Toyota Yaris hatchback, which not only bears the Gran Turismo 7 name but comes with a free copy of the game and a PlayStation 5 console.

Andrew Evans · Sep 6, 2017· Comments
After it surprisingly revealed a new car at the Consumer Electronics Show (CES) in 2020, Sony has taken the covers off a second model at this year’s show — and it looks like it might be planning to build them.

Andrew Evans · Sep 6, 2017· Comments
Porsche has officially taken the covers off its Vision Gran Turismo car, designed specifically for Gran Turismo 7 when it launches on March 4.

Andrew Evans · Sep 6, 2017· Comments
MG’s specialist design center, SAIC Design in London, has created a new concept car that’s not only inspired by gaming, but a games room itself.

Michael Leary · Sep 6, 2017· 13 Comments
Although Lamborghini has now officially pulled the wraps off its latest nostalgia project, the Countach LPI 800-4, you’re already too late to buy one.

Andrew Evans · Sep 6, 2017· 21 Comments
Genesis has unveiled a trio of new racing car concepts designed in collaboration with Gran Turismo, destined to take their places in the racing game series in the near future.

Andrew Evans · Sep 6, 2017· Comments
Nissan has taken the covers off the latest model of its flagship performance car, the GT-R Nismo, ahead of its market launch later this year.