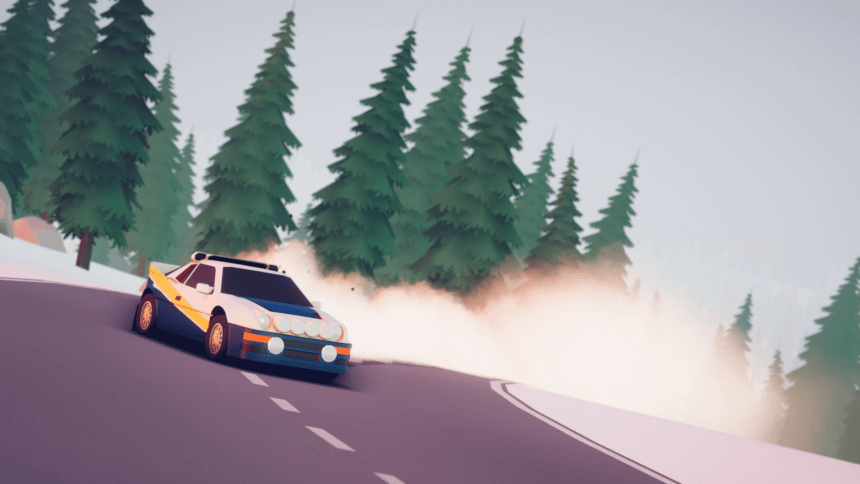 It’s only just over half a year since stylish off-road racing game art of rally launched on PC, but it’s soon to make its way to our consoles too. Creator Funselektor — Dune Casu — has today confirmed that the game will land on PlayStation hardware this summer.

That follows on from an announcement earlier in the year that art of rally would be coming to Xbox family consoles in the summer. In fact it’s also scheduled to reach Nintendo Switch at the same time, to make a console full house.

For those of you who aren’t yet familiar with art of rally, imagine the golden age of rally — covering the International Championship for Manufacturers and the genesis of the World Rally Championship, right up to the Group A era of Subaru vs Mitsubishi. Combine that with an isometric viewpoint and a detailed yet minimalist art style and you’re pretty much there.

The game features more than 50 cars from this era, although they’re not licensed vehicles so they have some inventive names. All the action takes place on more than 60 classic rally stages, in Finland, Japan, Germany, Sardinia and — in an update also arriving this summer — Kenya. There’s support for custom liveries too, with over 400 user-generated designs in the art of rally community so far.

It’s the second title from Funselektor to make the PC to console transition, with art of rally following its predecessor Absolute Drift, which hit consoles in 2016.

We don’t have a firm date for any of the console editions just yet, and we don’t know whether the Xbox Series and PlayStation 5 versions will bring any particular enhancements over the One/4 versions. Either way though, there’s not long to wait to experience one of the more compelling racing titles around.

art of rally
149 Comments Discuss this post in our forums...
Test Your Badge Knowledge With Our Car Logo Quiz

Forza Series 32 Jun 13 by Andrew Evans
Microsoft has officially announced Forza Horizon 5, and at the same time confirmed both its setting and launch date. As expected, the Horizon Festival will move across the Atlantic to…