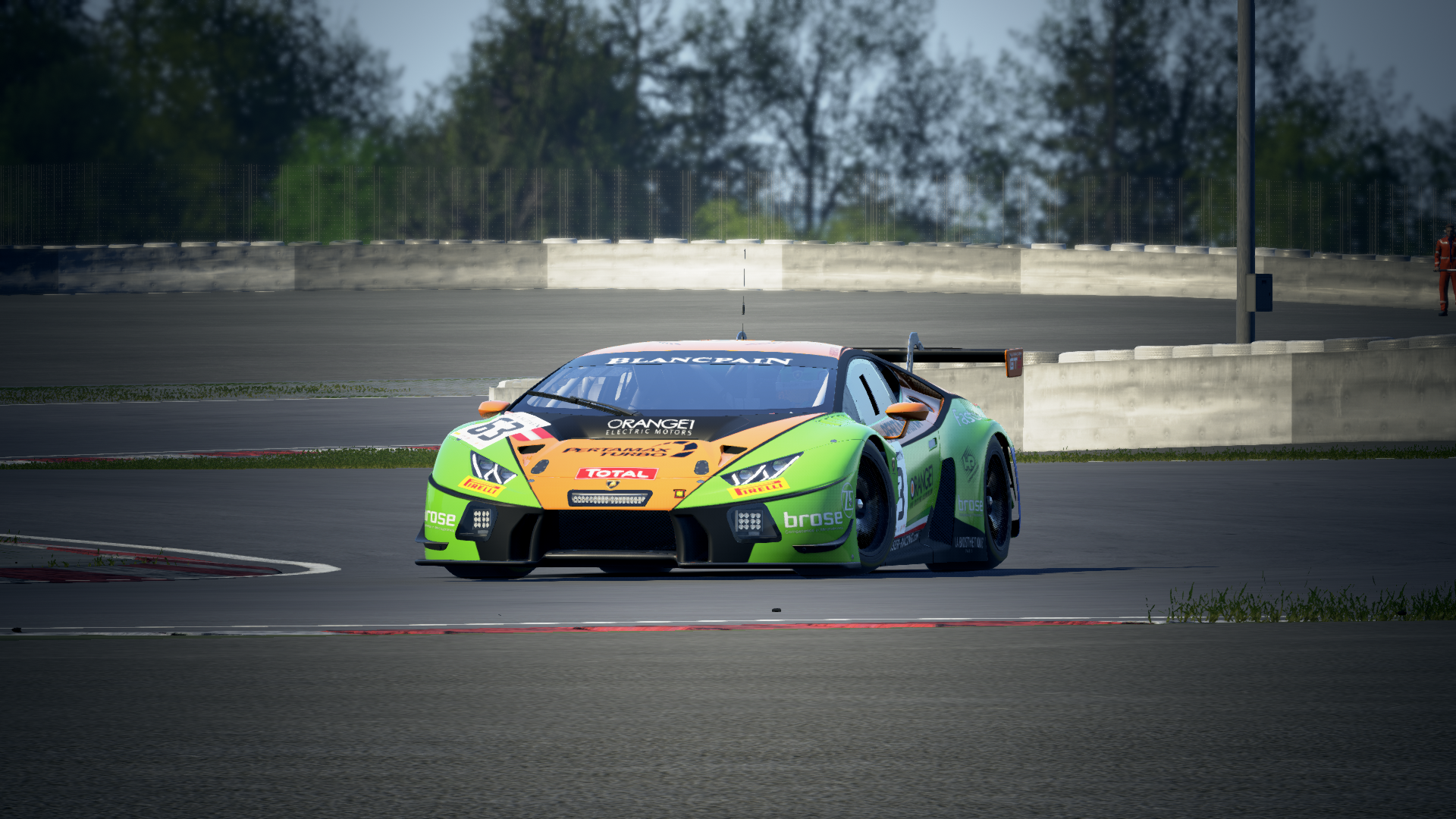 The day has come at last: Assetto Corsa Competizione has entered Steam Early Access. ACC is the next evolution of the acclaimed sim racing franchise — just don’t call it a sequel.

No, Assetto Corsa Competizione is something different. While it may be the second iteration in the series, it’s an all-new game from top to bottom. As such, Competizione has a singular focus: the Blancpain GT Series. As the official game of the series, you can expect all the cars, tracks, teams, and drivers.

There’s no denying ACC has some pretty big shoes to fill. With over 2.5 million copies of the original game sold, Kunos Simulazioni is very aware of that fact. Powered by Unreal Engine 4, Competizione focuses on doing what its predecessor couldn’t. The most notable additions, as revealed earlier this year, are dynamic time and weather.

AC Competizione takes what the original game did and improves the formula. While everything we know so far sounds impressive, does it deliver? We’ve spent the last week getting familiar with Kunos’ latest creation to find out. 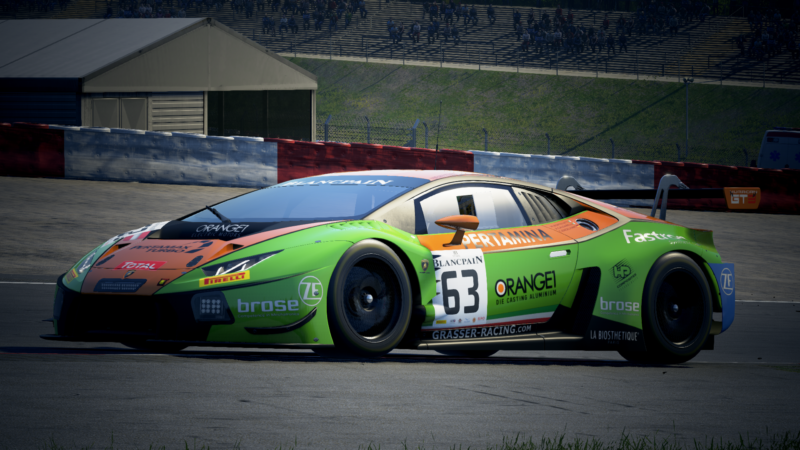 While AC Competizione may not have the diversity of the original, you’ll soon forget that once you’re on the track.

With the initial release, players will find a single car and track combo: the Lamborghini Huracan GT3 and Nurburgring GP.

Let’s address the elephant in the room: Assetto Corsa veterans will feel right at home with the familiar handling model. Moreover, using a controller no longer feels like a chore. It feels fantastic to use a pad, actually; ACC feels natural with one. So much so in fact, that console racers have plenty to look forward to, should the game make its way to the platforms in the future.

Our one and only gripe in our time using a pad is the lack of force feedback. It makes judging what the car is doing on corner entry and exit particularly difficult. It’s not a deal breaker by any means, as using a controller feels much better in Competizione. It’s also worth remembering this is a preview of the full game set to release next year.

As you’d expect, things come into their own when using a steering wheel. Using a G27, ACC feels much like the original Assetto Corsa. That’s not an insult either, as it still stands as one of the best driving experiences in the genre, four years later.

There’s little tweaking necessary should you want to jump right in. However, those looking to customize the experience a little more will be in good hands.

While the options are slim at the moment, players can choose to customize FFB gain and minimum force. The latter allows you to increase weak forces otherwise dampened by the wheel. Pro tip: if you’re using a G27, dial in 10-15% here for better responsiveness. Moreover, heading to the advanced tab allows you to customize steering scale and lock, and brake gamma.

Controller users will have a few options to customize as well, the most obvious of those being rumble sensitivity. While it doesn’t appear to have an effect at the moment, we’re looking forward to fiddling with it once resolved. Beyond that, there’s the usual suspects: deadzone, speed sensitivity, steering filter, steering speed, and steering gamma.

Interestingly enough, you can customize the stick used for steering. This is a welcomed option we can’t recall seeing in many other racing games. Finally, there’s an auto steer option which we’d expect most, if not everyone to disable.

Beginner needs little introduction. It’s a great way for AC newcomers  to work their way into things without being overzealous. Though, even with full assists you’re not entirely safe from getting on the Huracan’s bad side. More on that later. Rookie steps the game up with manual gear selection.

Expert takes it further by switching all but the pit limiter, procedure, and request to manual. Pro, as you can guess from the name alone, leaves everything in your capable hands. Finally, there’s the custom option for those looking to have the best of all worlds. Notably, options for stability control level and the ideal line are user specified regardless of the assist level.

You can work around any weaknesses you have, or you can go all out and drive as you would in the real world. It’s worth pointing out that traction and stability control, as well as ABS are all fair game in the real sport. As such, they’re enabled by default to the tune of 6/8 for TCS, and 6/11 for ABS.

For seasoned veterans of the series, it all feels very familiar, in a good way. The Huracan seems a little more nose heavy in Competizione than in the original. It remains as responsive as ever, but there is modest understeer. That’s to say nothing of its blatant attitude problem to boot.

Even with traction control dialed in at 6, it takes very little to upset the rear end. This is where you’ll get the best chance to see how much has changed under the hood of ACC. Work the rear tires too much and they’ll turn a deep orange in the tire app.

Tread carefully (pun intended) should this happen: the slightest misstep will send you spinning. Work the tires back into the green and you’re good to go for another attempt. One of the hallmarks of ACC is making the cars easier to handle. With direct support from the Blancpain GT Series team and drivers, this is perhaps the closest you’ll get to the real deal.

Of course, the game comes into its own when you factor in time and weather. For the first time, players can dial it in on a wet circuit. For many, this is where the learning curve begins and ends. Take it from us: driving on a wet circuit feels different here than in other racing titles.

For those brave enough, we have a challenge: take to the GP Circuit with all driving assists disabled. We set about taking the Lamborghini across the line in storm conditions, and it was an absolute hoot. Under moderate acceleration, you can feel the rear of the car squirming about as it fights for grip. It is very easy to upset the car at any point in time.

Make no mistake, it was the most fun we had spending time with this preview. 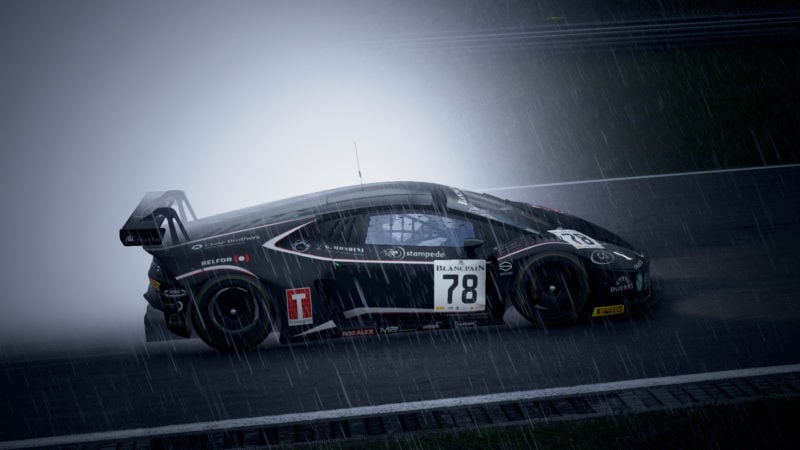 From the first batch of screenshots, one thing was clear: Competizione looks good. Seeing it in action one-on-one makes that all the more obvious. The differences between it and its predecessor are night and day. Powered by UE4, the not-a-sequel looks like a next generation title by comparison.

That isn’t to say the original was a slouch when it came to visuals. But all it takes is one look to realize this is an all-new title. Driving that point home is, again, the inclusion of weather and night racing — two frequently-requested features that have now taken form in AC Competizione.

There are plenty of options to make the most of a high-end PC. Moreover, if you’re eyeing the upcoming GeForce RTX series you’re in for even more eye candy. This being a preview build, there’s the occasional hiccup here and there, as well as a few visual bugs. Nothing out of the ordinary then for a game in a pre-beta state.

The audio engine also sees a marked improvement. While the car’s singing voice isn’t much different to what it was in AC, it’s the secondary noises from within the cockpit or out on the track that really elevates proceedings. Make no mistake though, the Huracan GT3 comes to life during gameplay. The visceral V10 engine note is unmistakable, and it only sounds better when watching a replay.

The issue then — if you could call it that — is that the original game already set a very good example with audio for the series. Competizione takes it one step further, and it makes for an immersive experience. Trudging through the rain-soaked circuit, inching the car to the start/finish line without missing a beat.

There’s no denying Assetto Corsa Comeptizione is for a niche audience, perhaps more so than the original game because of its focus on Blancpain GT. With that in mind, this is very much Assetto Corsa, through and through.

It may lack the expanse of the original when it comes to the official car and track rosters, but it makes up for it with a quality approach. As we’ve seen with other racing titles — most recently, F1 2018 — a tighter focus on one aspect of the automotive realm has its benefits.

Best of all, this is only the beginning of a game that’s going to grow. Over the next five months we’ll see a wealth of new features make way, including cars and tracks. As it stands, ACC already offers experiences the original could never deliver upon. That folks can pick it up early for a fraction of the final retail price, and take part as it continues to evolve, also makes Competizione a strong value proposition, at least until prices start going up in November.

Does AC Competizione deliver? It’s difficult to say without the finished product in hand. As such, we’ll reserve our final words for the full game when it lands in the first quarter of 2019. We’ll say this much though: whether it be driving in the pouring rain with thunder cracking above, or in the dark of night — it just feels right.