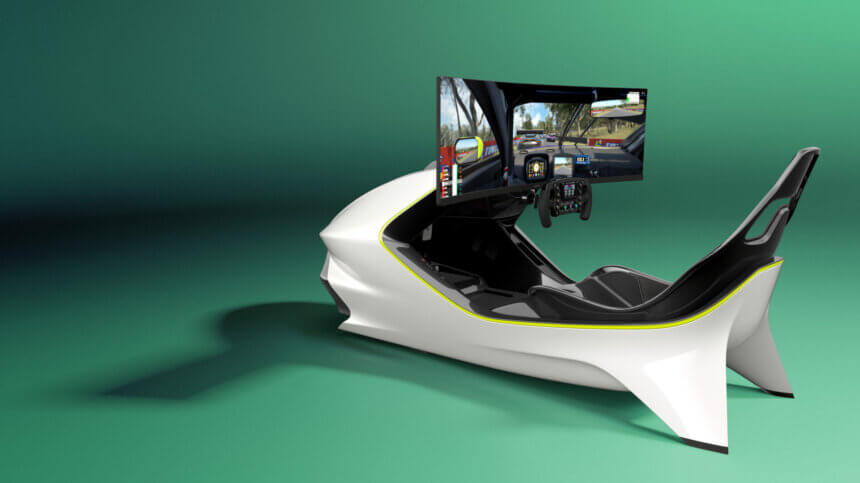 Aston Martin has revealed its AMR-C01, a driving rig created by the brand and technical partner Curv Racing Simulators.

Curv, headed up by Aston Martin works racing driver Darren Turner, has worked with Aston to create the rig — which partly takes inspiration from the Valkyrie hypercar. It’s an Aston Martin design, engineered and assembled by Curv at its home near Banbury in the UK.

The AMR-C01’s seating position is the same as that of the Valkyrie, to provide a hypercar experience. It is, of course, fully carbon-fiber, with a number of trim options including contrast stitching and tan leather. The carbon-fiber theme extends to the frame itself, which is a full CF monocoque and designed to resemble Aston’s current design language.

As for the simulator itself, that’s based around i7 PC, with GTX2080 GPU. This ships with Assetto Corsa installed, but other PC sims are also compatible. There’s a professional standard steering wheel base, supplied with a Precision Sim Engineering formula-style wheel with full color LCD display, carbon fiber shift paddles, and an array of dials and buttons. The pedal box can be controlled electronically, with eight inches of travel.

All the racing action is displayed on an ultra-wide, curved 32:9 QHD monitor with low latency — which appears to be a Samsung Odyssey G9 in these initial press shots.

As you might expect, this all comes at something of a price. Each of the 150 units comes in at £59,500 before tax, or close to $90,000 with UK tax included, before any selected optional extras. However, should you have the money spare, you can order the AMR-C01 now.

“This was a challenge for the design team as, although the simulator isn’t a car, it is inspired by our racing cars. It needed to exude the same elegance, boasting the same dynamic lines and balance of proportions as any Aston Martin with a racing lineage. I can picture the AMR-C01 in the most beautiful of residences as a sculptural work of art in its own right.”

“The AMR-C01 is all about the love of racing. We’ve created a home simulator with incredible immersion that offers users the opportunity to have a great time racing in the virtual world, from the comfort of their own home. Our goal was to create a simulator that provided as much enjoyment in virtual reality as real racing does. Racing cars is a lot of fun and it is great to see that with the growth of esports racing, more people are now getting involved.

“We modeled the driving position on the Aston Martin Valkyrie so users of AMR-C01 can get the full hypercar experience. I’m very proud of what we’ve been able to achieve, with design and engineering creating what I believe to be the most beautiful home simulator available.”

Aston Martin
43 Comments Discuss this post in our forums...
Test Your Badge Knowledge With Our Car Logo Quiz

Hardware 87 Jun 14 by Andrew Evans
After teasing us for much of the past month, Thrustmaster’s new wheel has broken cover — though not exactly how Thrustmaster planned it. According to numerous online store listings the…