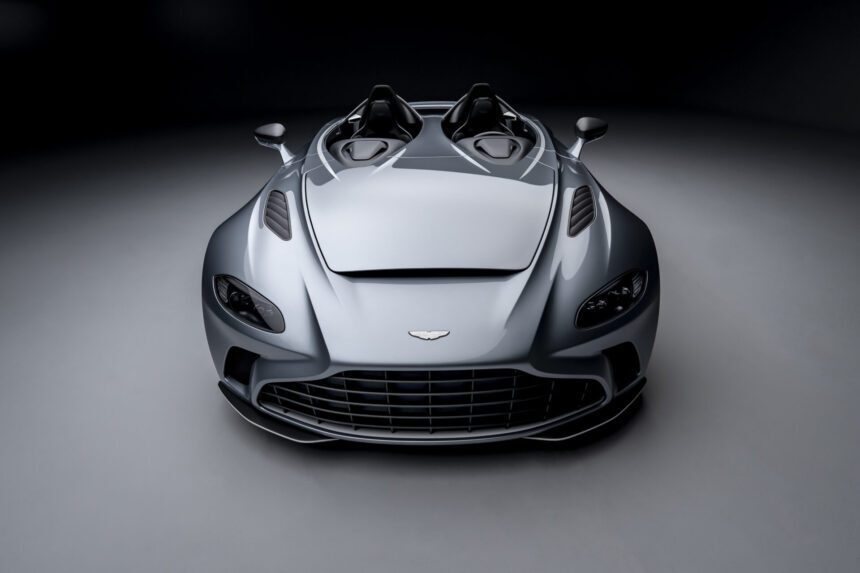 World famous luxury sports and GT car brand Aston Martin might have been having a difficult time of it lately, but that hasn’t stopped it from coming up with this rather spectacular limited run machine.

Aston calls it the V12 Speedster, and that pretty much encapsulates the whole idea. Taking cues from the rest of the model range, the V12 Speedster is a speedster-style car — one with neither roof nor windshield — sporting the brand’s 700hp, 5.2-liter V12 under the hood.

Underneath, the Speedster is a bit of a mix of models. It’s a novel platform, based on Aston’s bonded aluminum chassis, using parts of the Vantage and the larger DBS Superleggera.

However, everything rapidly departs from the Aston Martin norm beyond that. There’s a classic biposto seating arrangement, with a large spar of bodywork separating drive and passenger. The two parts of the cockpit each have a cowling behind the occupant, similar to the Aston Martin DBR1, but no screen ahead to ward off stray bugs.

This version of the car also takes inspiration from the F/A-18 Hornet multirole fighter. Look closely and you’ll spot aviation-themed details, including some F/A-18 logos dotted about the cabin. The silver and black theme is all intended to make a nod to the jet, but also to showcase the possibilities of the ‘Q by Aston Martin’ customization service — which is actually responsible for creating the car.

That V12 is good for 700hp and 555lbft of torque, and Aston has penciled in a 0-60mph time of around 3.4s. This puts it about on a par with the slightly more powerful DBS Superleggera, so the Speedster’s curbweight is likely to be in a similar region of around 3,700lb.

You won’t be able to go quite as fast however. Aston Martin limits the Speedster to 186mph, which is likely to be more than enough to make you wish you’d put on a helmet.

“Nothing demonstrates Aston Martin’s commitment to providing unique, special models to its customers more than the V12 Speedster. The 88 hand-built cars will be sought after by driving enthusiasts and collectors alike all around the world. I’m excited not just about what they offer drivers, but of what it represents. The V12 Speedster not just showcases our incredible engineering capability and ambition, but also celebrating Aston Martin’s rich heritage.”