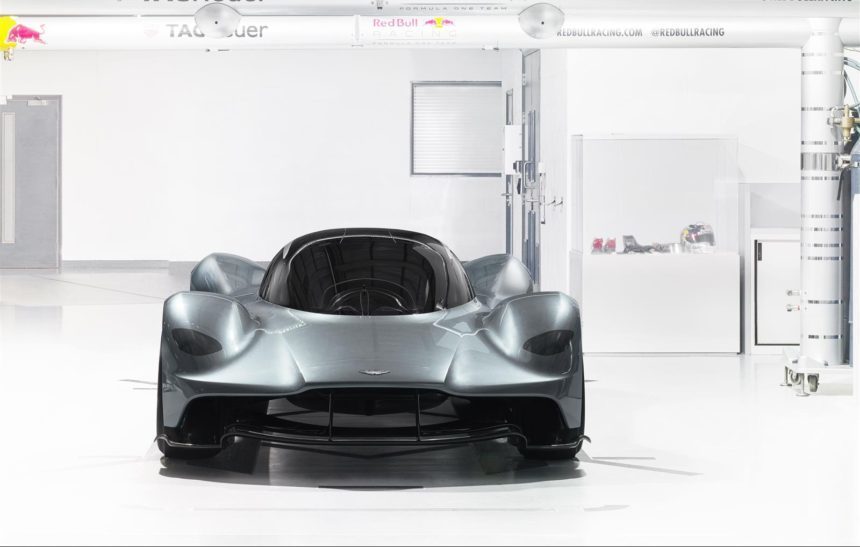 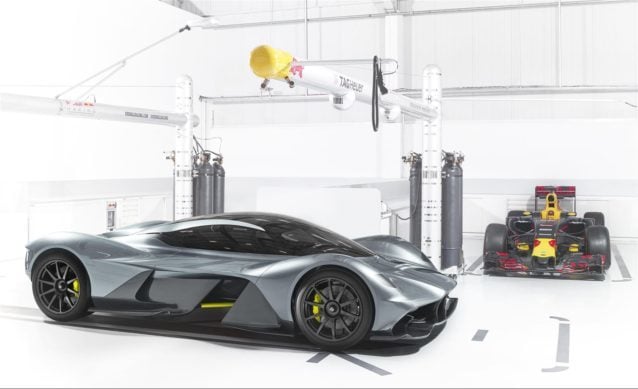 We first reported on the Aston Martin/Red Bull collaboration back in March, and today, the sheets were pulled back. Dubbed AM-RB 001 – a name likely to be replaced with one starting with V when deliveries start in 2018 – it promises a level of road car performance practically unheard of until now.

While many of the details are still under wraps, the boys from Gaydon have confirmed that a clean-sheet V12 design will find its way behind the driver, breathing without the aid of turbos. The 7.0L will be extremely high-revving, as the target is the golden 1:1 horsepower/kilogram ratio, with the car expected to land under the four-digit mark on the scales. 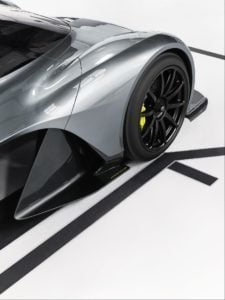 As if that’s not enough, Aston Martin has also confirmed an even more extreme track-only version will be produced, with projected performance on par with the LMP1 racers of today. Including 25 of this extreme variant as well as any prototypes, production will end somewhere between 99 and 150 units, according to Aston CEO Andy Palmer. Whatever the car does end up being called, it will be built at the same plant in Gaydon that constructed Aston’s previous hypercar, the One-77.

As befitting a car with a multi-million pound price tag, no stone has been left unturned in the hunt for performance. The Red Bull-designed transmission will have no reverse gear, with the car instead relying on a battery for backing up, as well as an additional performance boost moving forward. The brakes drop the ceramic aspect of the fashionable carbon-ceramic discs found elsewhere on road cars. According to our friends at Evo, not a single piece of the entire car is crafted from steel.

With Adrian Newey, Red Bull’s record-setting design guru, behind the project, there are not only obvious F1 influences, but also nods to his virtual work. The X-series of cars in Gran Turismo are hinted at in the vast amounts of negative space behind the front wheels, a sort of underbody alternative to what we’ve seen recently on Ford’s GT. Looking towards the front of the car through these cutaways, we see the inboard push-rod suspension, which Newey promises will help provide the dual-personalities needed for a car of such broad talents:

“I’ve always been adamant that the AM-RB 001 should be a true road car that’s also capable of extreme performance on track, and this means it really has to be a car of two characters. That’s the secret we’re trying to put into this car – the technology that allows it to be docile and comfortable, but with immense outright capabilities.”

Aston Martin’s lead designer, Marek Reichman, has imbued the model with a handful of family features. The swollen, flowing arches hark back to the DBR1 sports racers of the 50’s, while the trademark grille shape is present up front as well as in the small, active rear spoiler. The floating roof line ties the AM-RB to the recently-revealed DB11 grand tourer, though that’s about where the similarities end between the two cars.

To our eyes, the Red Bull X2010 and Aston’s Vision GT are the most obvious influences, with a pinch of Maserati’s glorious Birdcage 75th concept from 2005 in the smooth curve of the passenger cell and the tautly-drawn bodywork. There’s also shades of Jaguar’s sadly-cancelled C-X75 project in the stubby nose.

Plenty of companies have made bold performance claims before only to fall short, but with the engineering might of Adrian Newey and the Red Bull team behind this project, we wouldn’t bet against them. Roll on, 2018.

Adrian NeweyAston MartinRed Bull
The original comments for this post are no longer available.
Can You Beat the Impossible Gran Turismo Quiz?