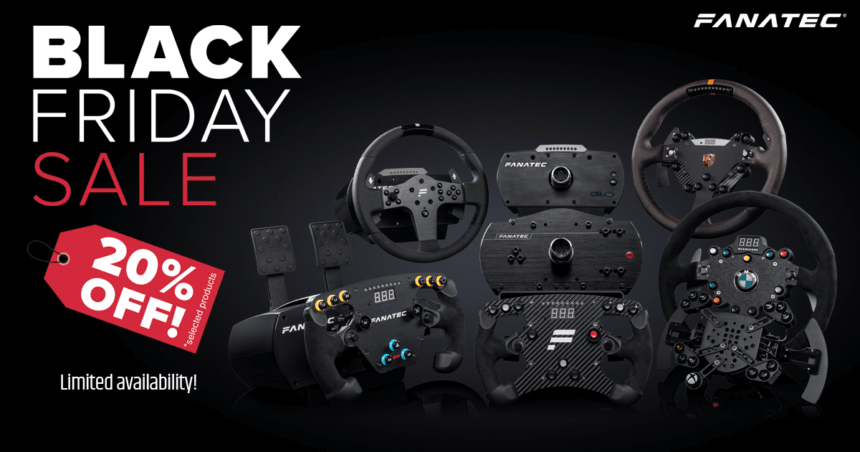 It’s time for Black Friday and Cyber Monday: the time of year at which the best deals can be had on usually expensive sim-racing hardware.

As ever, Fanatec is leading the way with some solid discounts on its steering wheel peripherals this year, but it’s keeping things a little more basic with its 2020 Black Friday offerings.

In a carefully curated deal, Fanatec has picked a selection of its best-selling PC, PlayStation, and Xbox wheels, and giving a flat 20% discount on all of them. These are limited to 14,000 total units globally, and once they’re gone that’s the end of it.

To avoid some of the unpleasantness we’ve seen in recent weeks with Xbox Series X and PS5 sales, and to ease pressure on the site, Fanatec won’t announce when the sale goes live. It’ll simply start the event at some point before 1100 UTC on Friday 27.

The full list of available items is as follows:

You can take advantage of the deals, when they go live, in your regional Fanatec store:

Black Friday
79 Comments Discuss this post in our forums...
Test Your Badge Knowledge With Our Car Logo Quiz

Hardware 77 Jun 14 by Andrew Evans
After teasing us for much of the past month, Thrustmaster’s new wheel has broken cover — though not exactly how Thrustmaster planned it. According to numerous online store listings the…

Gran Turismo Sport 483 Jun 14 by Andrew Evans
The latest round of Gran Turismo Sport Daily Races has arrived and this week players will be heading to two of the world’s most famous racing circuits, and a staple…

Hardware 77 Jun 10 by Andrew Evans
Sticking to its Thursday schedule, Thrustmaster has again dropped a teaser onto social media for an upcoming new product. However this time we’ve also got a date for the unveiling:…

Hardware 280 Jun 9 by Andrew Evans
After a couple of batches of closed pre-orders earlier in the month, Fanatec has now made the new direct-drive CSL DD, CSL Pedals, CSL DD table clamp, and Boost Kit…