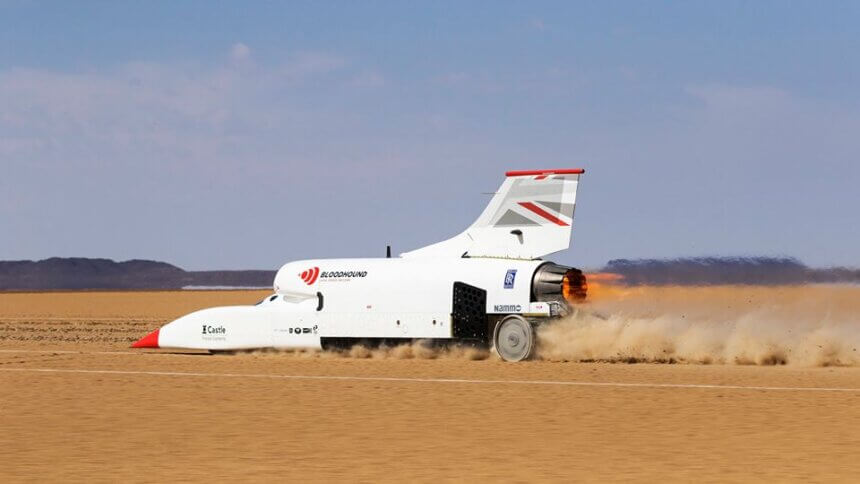 After successful high-speed tests in 2019 seemed to put its troubles behind it, the Bloodhound Land Speed Record project is once again in need of a new owner.

Current owner, Ian Warhurst, has put the project and the Grafton LSR company which owns it, up for sale. Warhurst bought the car almost off the scrap heap back in 2018, after financial difficulties seemed to have shut the project down permanently.

However Warhurst’s investment revitalized the Bloodhound plan and, with a fresh coat of paint, the car headed to South Africa’s Hakskeen Pan for its first real testing in October 2019. There it simply cruised up to 628mph, using its Eurofighter Typhoon jet engine only, faster than all but the most recent four land-speed record cars — without full power available.

With those runs under the car’s wheels, Warhurst had hoped that the publicity and media coverage of the car in high-speed action would attract fresh investment, allowing for the installation of the Nammo rocket to push Bloodhound over 800mph — and on to its 1,000mph goal. That hasn’t materialized, in part due to current global conditions.

“It has been a privilege to lead this team of world-class engineers over the past two years. I was spellbound – along with a huge audience around the world – as we tested the car up to 600+ mph in South Africa.

“When I committed to take the car high speed testing in 2019, I allocated enough funding to achieve this goal on the basis that alternative funding would then allow us to continue to the record attempts.

“At this stage, in absence of further, immediate, funding, the only options remaining are to close down the program or put the project up for sale to allow me to pass on the baton and allow the team to continue the project. This gives someone with the right passion and available funding to effectively swoop in at the last minute and take the prize.”

The team estimates that it will take around £8m ($11m) of fresh investment to install the rocket engine and make fresh runs at Hakskeen to capture the record. For comparison purposes, this is about as much money as a top footballer in the English Premier League would earn in six months, and less than it would cost to buy the Bugatti La Voiture Noire. Amazon owner Jeff Bezos could buy the project with one hour of his typical increase in wealth.

In return the new owner will have a chance to etch their name into the history books with what might be the last land speed record. Bloodhound’s trials over the last 13 years have proven just how difficult — and expensive — driving beyond the speed of sound is. Should Bloodhound reach its goal, it’s likely to be a long time before anything matches it; the record it’s aiming to beat is already 24 years old.

“In my opinion, the Bloodhound team has built the best Land Speed Record Car ever. It made our 628 mph test run look easy! We’re now raring to get to 800 mph+, to showcase this technical marvel and to invite a global audience to join in an incredibly exciting adventure.”

Bloodhound SSC
116 Comments Discuss this post in our forums...
Test Your Badge Knowledge With Our Car Logo Quiz