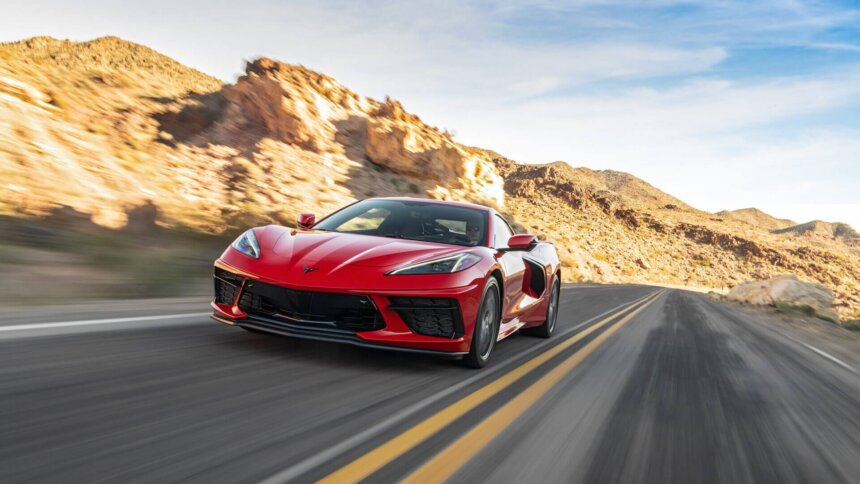 It’s nearly that time of the month again (well, lunar month at any rate) where the next batch of Forza Horizon 4 content is getting ready to hit the game. The next set of four seasons looks to have a bit of a surprise coming: Chevrolet’s new mid-engined Corvette C8.

Forza’s own social media channels have somewhat given the game away on this one. A post to promote the upcoming livestream, during which the next batch of content for Forza Horizon 4 will be the subject of discussion, revealed the car. Not in full, but with enough detail to make it pretty obvious:

The first Forza Monthly of the year is this Monday! Join us in the chat for the latest news and updates at https://t.co/rXLuDb5sWb. pic.twitter.com/3NOXMGUvAX

In case you’re having trouble placing the angle, this is a shot of the vents that flank the C8’s rear window, which draw heat out of the engine bay located beneath.

Playground Games had in fact dropped another social media hint about the car earlier in the week, though it’s only really now that we can place it in its proper context:

It’s actually a bit of an unusual choice of vehicle for Forza Horizon 4. FH4 is set in a highly stylized version of the various parts of the UK — largely the north of England and south of Scotland — and you can’t buy the Corvette in the real UK. In fact Chevrolet has no market presence at all in the whole of Europe, after withdrawing from the market in 2014.

Nonetheless, the C8 is an exciting addition. The first ever mid-engined Corvette, Chevrolet introduced the C8 in its home market in early 2020. It uses a new, 490hp, 6.2-liter V8 engine, mounted behind the driver and driving the rear wheels. The C8 is also available as either a targa-top convertible or with a folding hard-top roof.

Although we know that Playground Games is pretty likely to reveal the C8 for Forza Horizon 4 this coming Monday, there’s probably plenty of other content arriving alongside it. You’ll need to catch the live stream, starting at 1900 UTC on Monday January 11, to find out what’s accompanying it in the Season 31 update.

ChevroletCorvette
18 Comments Discuss this post in our forums...
Test Your Badge Knowledge With Our Car Logo Quiz