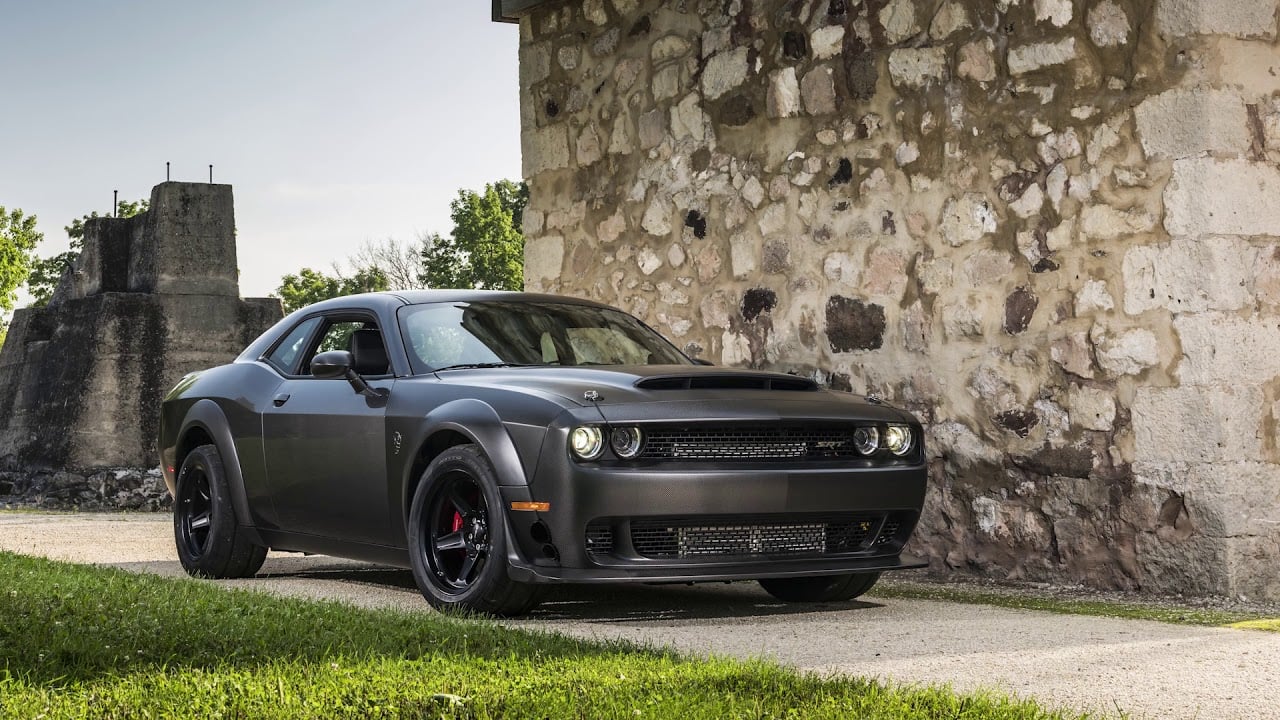 The Dodge Demon is already an insanely fast straight-line ride. For some, that might not be enough, and Wisconsin-based Speedkore Performance Group has the answer.

In stock form, the Demon can already lay down sub-10 second quarter-mile runs. Speedkore saw room for improvement however, and has gone to town on the Mopar muscle car. For starters, the entire body is now carbon fiber. Impressively, the team has kept it more or less stock. The biggest change is the new exhaust location: directly ahead of the front wheels.

While the new skin is sure to help the Demon on the scales, that alone wasn’t enough. Speedkore had already done a carbon-bodied Demon last year anyway — and SEMA is not about repeat performances. So the tuning company tossed out the supercharger and grafted two T4 turbochargers to the 6.2-liter V8 instead. The result? A positively diabolical 1,400hp. Or roughly one Viper’s worth of additional horsepower over the now-meek stock car.

So far, this new uber-Demon — we’ll let the line form for suitable new names here — has laid down a 8.77-second run on the 1320. It feels unnatural seeing something so big and relatively tame looking move so quickly. Speedkore’s monster also puts out one hell of a noise:

The 1,400hp Demon won’t be the only one of Speedkore’s creations at SEMA 2018 next week. The crew has been working on a carbon-bodied Shelby GT350R, an “Evolution” classic Dodge Charger, and no less than Robert Downey Jr.’s 1974 BMW 3.0 CS.

The show begins October 30 in Las Vegas, and will also play host to the American GT Sport FIA Regional Final. We’ll be on the ground for the event, so stay tuned for more on the Speedkore Demon and everything else SEMA!

Andrew Evans · Oct 22, 2018· Comments
Gran Turismo series partner Toyota has revealed a special, limited edition version of its Toyota Yaris hatchback, which not only bears the Gran Turismo 7 name but comes with a free copy of the game and a PlayStation 5 console.

Andrew Evans · Oct 22, 2018· Comments
After it surprisingly revealed a new car at the Consumer Electronics Show (CES) in 2020, Sony has taken the covers off a second model at this year’s show — and it looks like it might be planning to build them.

Andrew Evans · Oct 22, 2018· Comments
Porsche has officially taken the covers off its Vision Gran Turismo car, designed specifically for Gran Turismo 7 when it launches on March 4.

Andrew Evans · Oct 22, 2018· Comments
MG’s specialist design center, SAIC Design in London, has created a new concept car that’s not only inspired by gaming, but a games room itself.

Michael Leary · Oct 22, 2018· 13 Comments
Although Lamborghini has now officially pulled the wraps off its latest nostalgia project, the Countach LPI 800-4, you’re already too late to buy one.

Andrew Evans · Oct 22, 2018· 21 Comments
Genesis has unveiled a trio of new racing car concepts designed in collaboration with Gran Turismo, destined to take their places in the racing game series in the near future.

Andrew Evans · Oct 22, 2018· Comments
Nissan has taken the covers off the latest model of its flagship performance car, the GT-R Nismo, ahead of its market launch later this year.