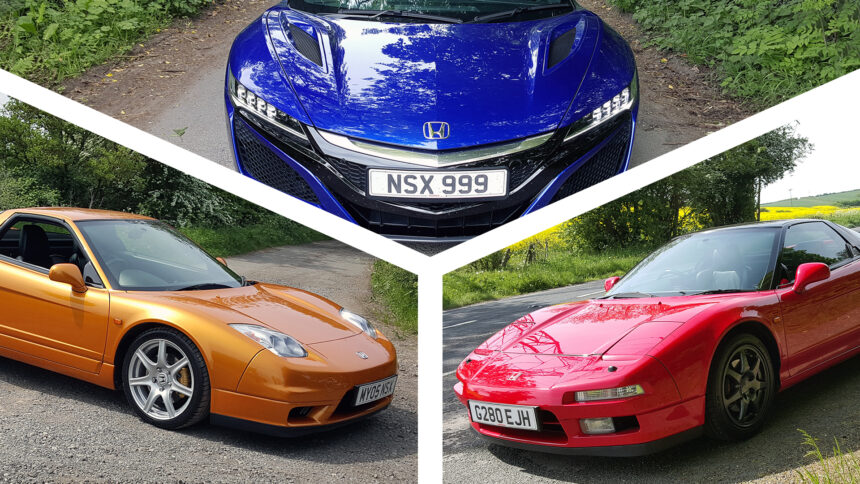 Driving 30 Years of the Honda NSX

Thirty years ago this week, a Japanese manufacturer unveiled a genre-redefining car at the Chicago Auto Show.

No, not the Mazda MX-5 — although that was there too — but Honda’s new NS-X supercar. Honda hadn’t quite finalized a few things, including the name, but that date was essentially the birth of the Japanese supercar.

Among consumers, the NSX never proved hugely popular. That’s likely due to squeamishness over spending so much money on a car from what was still an emerging nation, and a pretty humble manufacturer. But the car made waves among Europe’s prestige manufacturers; here was Japan doing it better, faster and cheaper. They needed to move the game on.

To mark the 30th anniversary of the NSX’s unveiling, we’ve been spending a little time with the original, and its successors. 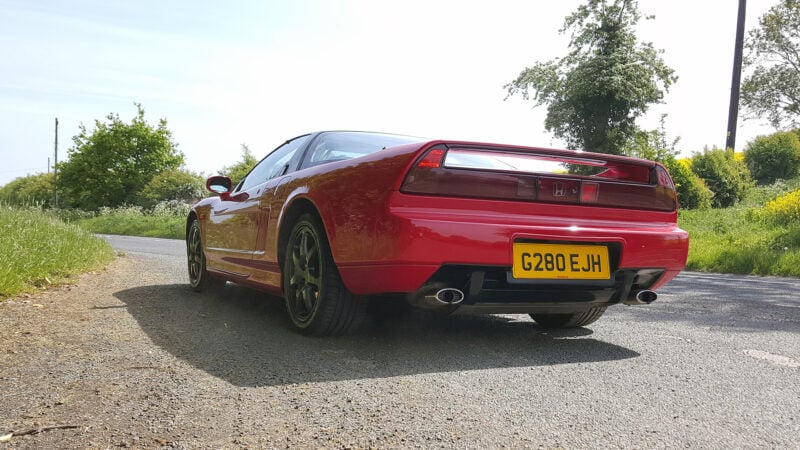 Sometimes, the original is not necessarily the best. So it proves here with this first-generation, UK-model NSX.

Although we might associate the NSX with the 3.2-liter, VTEC V6 or a snappy five-speed (six after the facelift) manual, the first cars used neither. Instead we find the earlier 3.0-liter unit, and it’s allied to a four-speed automatic.

It’s still an advanced engine. The titanium connecting rods were a first for any kind of series production vehicle, and Honda developed the later 3.2 from this NSX-exclusive power unit, but it is down on power. UK cars made do with 252hp initially, but it’s the auto box that saps the performance. Considering the NSX’s position as a supercar, a 0-60mph time in the sevens — more than 1.5s slower than the five-speed manual — is barely any better than the Mk1 MX-5 we turned up to the event in…

This all contributes to the 1990 car feeling unusually heavy. Although it’s not even 50lb heavier than the later model, almost everything about the driving experience is a little more numb than the later car, belying the abilities of the — also-first — aluminum chassis. It’s still hot-hatch quick, but it’s definitely one for cruising a boulevard rather than a back road.

But the essential recipe is there. If you sit in any of the NSX’s contemporaries, you’ll find them dark, dingy and cramped — if you even could get in. The NSX feels like an admittedly low ordinary car, and driving it is no chore. You can even fit a decent quantity of groceries in the trunk. 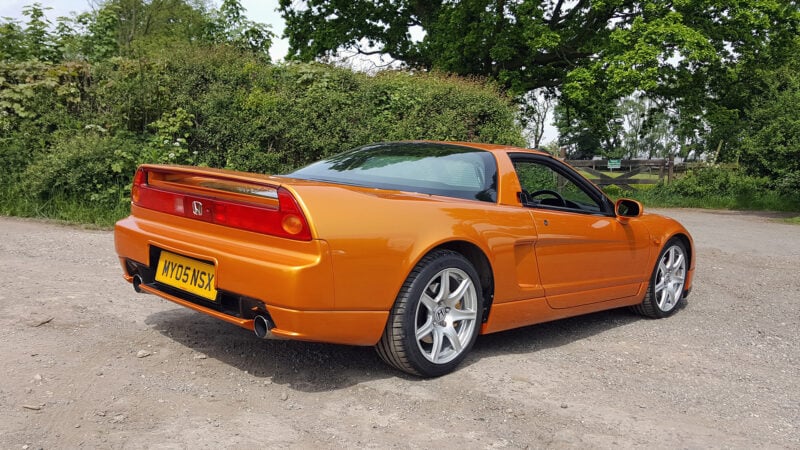 There’s only two major changes to the facelifted NSX. The first is Honda removing the pop-up headlights which, while understandable on the basis of crash safety and pedestrian protection, is unforgivable. Pop-up lights are the best.

A big tick in the improvement column though is the 3.2-liter V6 and six-speed manual combination. In fact Honda introduced the engine and gearbox on the pre-facelift car in 1997, but we’re testing it in late-model 2004 guise here.

To say it’s transformative is an understatement. The performance certainly benefits, with more than 1.5s taken out of the 0-60mph time. More than that though, it’s amazing how light the combination feels by comparison. There’s only a few pounds in it, but the earlier, auto car is a cruiser and this is a sheer street weapon.

Every part of the car feels more responsive. That’s not just the throttle, but the steering and brakes too. It also seems to release a bit more noise from the howling VTEC V6. Everything you’ve ever read about how good an NSX is to drive is true, in this specification.

The facelift carries over just about everything else from the original too. It’s still easy to get in and out of, still airy and bright in the cabin and you can still treat it like it’s a Civic. Less laudable is the interior, which is entirely unchanged. At this point, 14 years into the car’s life, it wouldn’t have been too much to ask for some suede, silver or any dash of color. It even still has a tape deck, on a £68,000 car in 2004. Even the Jazz had a CD player at the time.

Even so, this is pretty much the definitive spec of the original NSX. Our car is even in the best color for an NSX. But it doesn’t have pop-up lights, so… 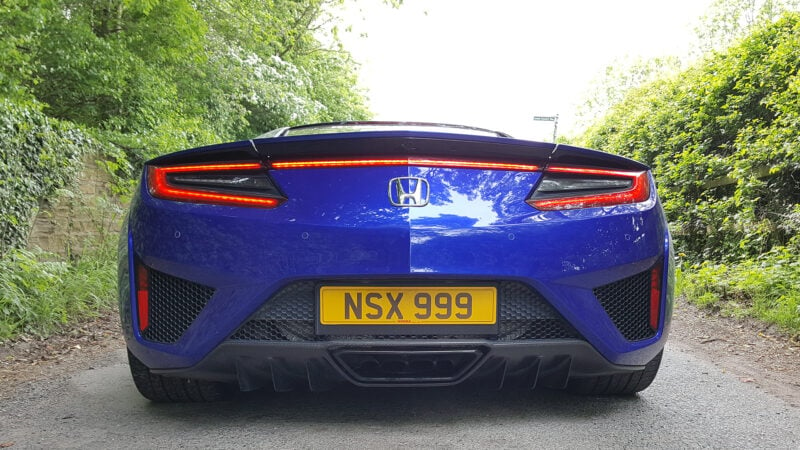 On the face of it, the modern NSX has very little in common with its ancestors.

At most you could cite the three-or-so-liter V6 sitting just behind the driver and the two-seat layout. It’s not even rear-wheel drive any more. That alone is enough to turn off fans of the original.

That somewhat misses the ethos of the NSX though. The original (we’ll concede not in auto form) was as advanced as it could be, using the latest — or even brand new — tech to deliver a car that could hang with supercars for less money. Does the new NSX meet that brief? Yes, and emphatically so.

Firing up the new NSX is a surprisingly quiet affair, thanks to the hybrid system; yes, it’s a petrol-electric hybrid. Three motors, two on the rear axle, one on the front — yes, it’s four-wheel drive too — mean that this is the supercar your neighbours won’t hate you for if you have early starts. You can waft away from the golf club or spa without looking like an oaf.

But if oafishness is what you seek, stab the right pedal. The battery and motors might give the NSX a pretty lardy curbweight, but the constant torque means it never feels it. Despite giving away the best part of 700lb to an Audi R8 or McLaren 570S, it is right up there with them through to its top speed. In contrast to the 1990 car, it doesn’t feel anything like as heavy as it is in the bends either.

Where it’s no longer so groundbreaking is the everyday feel the original NSX brought with it. Back in 1990, a supercar you could drive to the shops like a Civic was a revolution compared to garage queen Ferrari 348s and a Lotus you had to get into in stages over 15 minutes. Now that Audi is no worse than a TT, and the McLaren is — doors aside — as much a daily driver as a supercar gets.

The NSX still carries the ability, but it’s no longer on its own in the sector. It perhaps holds onto the Civic livability a bit too much, with the infotainment system straight from a hatchback that costs 10% of the NSX’s sticker price. Then again, the original’s interior was a rhapsody in black plastic…

HondaHonda NSX
52 Comments Discuss this post in our forums...
Can You Beat the Impossible Gran Turismo Quiz?