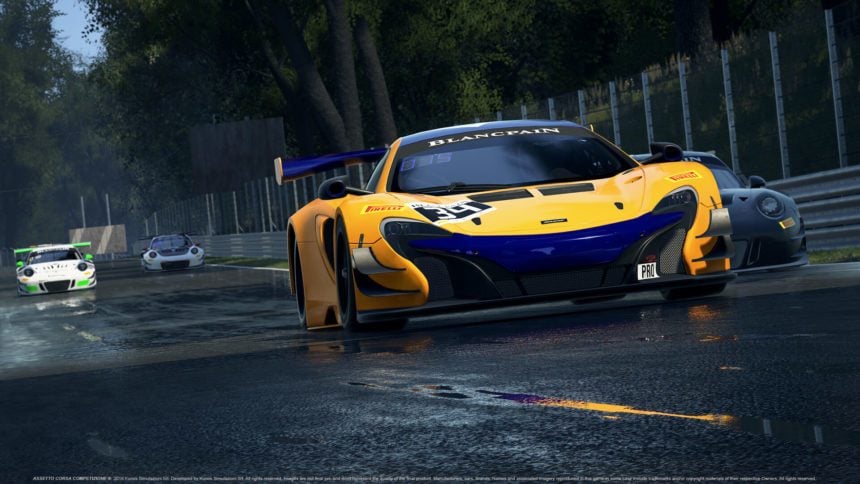 Just as Kunos Simulazioni promised, we’ve got our first look at Assetto Corsa Competizione in action. The game is on the show floor at E3 2018, giving sim racers a taste of the upcoming Steam Early Access title.

To mark the occasion — and whet the appetites of those that can’t take it for a test drive themselves — Kunos and 505 Games have released the following footage. It’s a trip around ACC‘s rendition of Monza, featuring Lucas Ordonez’ weekend drive, the Nissan GT-R GT3:

Right off the bat, the visuals look like a step up from the original Assetto Corsa. The lighting is certainly improved, no doubt due to the team’s decision to use Unreal Engine 4. It looks very natural.

The same goes for the sounds. There’s the dominant gearbox whine layered over the GT-R’s turbo V6. Running down the box for Monza’s slower corners punctuates the engine noise with the unmistakeable sound of a sequential transmission. It’s remarkably close to the real thing, using our friend Nick McMillen’s onboard footage from Spa as a comparison:

The official gameplay footage gives us a first look at the helmet cam in ACC too. Popularized in other racing titles like Project CARS 2, it’s a big boost for immersion for the official Blancpain game. Watching the driver get jostled around over the course of a lap helps, though we imagine the effect will be toned down for any potential VR setups.

While one of the big changes for ACC is the addition of dynamic time and weather, neither is shown off here. No worries; there’s unofficial footage from a soggy Spa-Francorchamps. And it looks great:

All the footage coming out of E3 is from a pre-alpha build of the game. That it’s already looking this polished can only be a good thing for when ACC comes to Steam Early Access later this summer.

E3 2018Gameplay VideosKunos Simulazioni
77 Comments Discuss this post in our forums...
Test Your Badge Knowledge With Our Car Logo Quiz