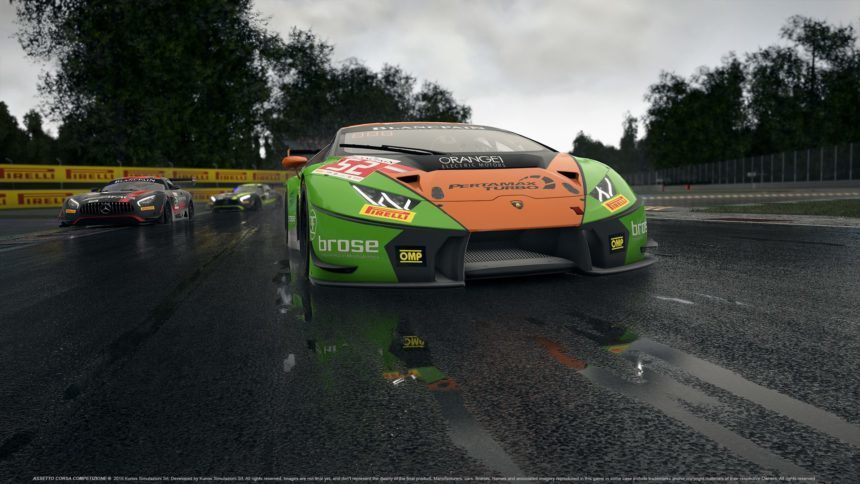 The Blancpain series is at historic Monza this weekend, for the second round of the 2018 season. To celebrate, Kunos Simulazioni has released another batch of screenshots for the official game of the series, Assetto Corsa Competizione.

It’s hard to believe, but it’s already been (exactly) two months since Kunos first announced the new game. The team has been hard at work on the project since, with the 2018 Steam Early Access target still well within sight. This newest batch of shots gives us our first look since that initial announcement. Appropriately enough, it’s at Monza — a soggy rendition of the track, something original Assetto Corsa players should be excited to see.

The graphics certainly look like a step up from the last game. Over on Twitter, Kunos stated its touched up all of the tracks from AC that return in ACC — and in some cases, has essentially rebuilt them.

Competizione makes use of Unreal Engine 4, and will feature fully dynamic time and weather. It will also feature the entire lineup of cars, teams, and tracks from the 2018 season.

While a console release this year looks unlikely, Kunos hasn’t completely written off eventual availability on PlayStation 4 or Xbox One. For players looking for Kunos’ brand of realism on consoles, the team did just release the Assetto Corsa Ultimate Edition yesterday.

Check out all the screenshots down below, and stay tuned to GTPlanet for more ACC news.