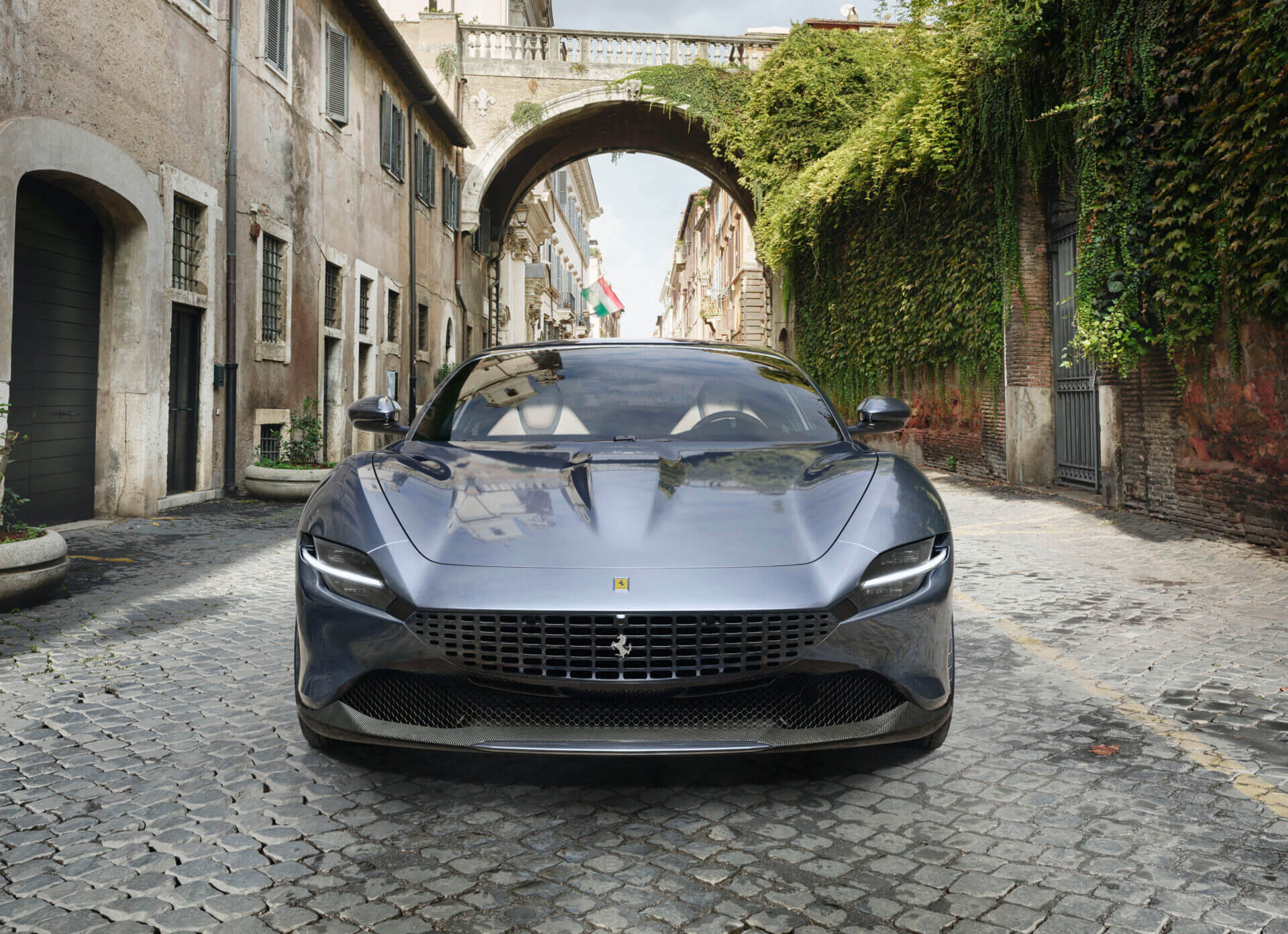 Ferrari has revealed some further information on its new Roma “2+” coupe, due to hit the roads in late 2020. Originally unveiled at a private event last month, details on the car were pretty scarce at the time. Now Maranello is been a little more forthcoming.

We already knew that the engine would be part of the F154 V8 family, coming in at 3.9-liters. Although not confirmed yet, it appears to be an F154B unit, such as you’ll find in the sister Portofino model. Ferrari has revealed the modifications it has made in order to make it the most powerful in that family.

The new engine uses different cam profiles and a new turbine speed sensor, allowing for an extra 5,000rpm on the compressor. Notably, Ferrari has also fitted a gasoline particulate filter (GPF) in order to ensure that the engine meets the latest Euro 6D emissions standards. Despite the emissions compliance, the Roma’s engine still produces 611hp, and 560lbft of torque.

Unusually, the Roma uses a new torque-limiting software system. The system reduces peak engine torque in lower gears, gradually increasing to the maximum in the higher gears. This is, according to Ferrari, another emissions-based tactic, reducing fuel consumption while accelerating through the gears as on the WLTP emissions test. 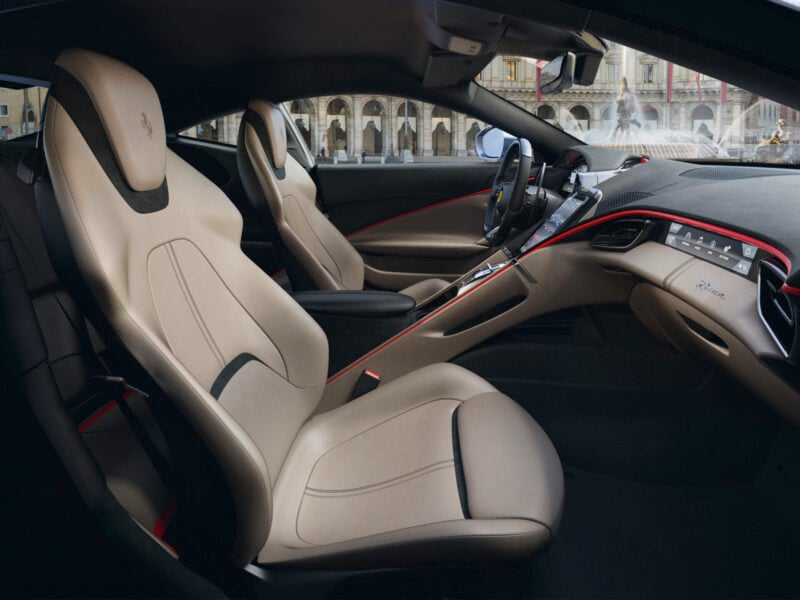 The torque heads to the Roma’s rear wheels through a new 8-speed DCT gearbox. This is based on the model used in the SF90 Stradale, although it has the notable difference of including a reverse gear — the Stradale reverses with its electric motor. This new gearbox is smaller and 12lb lighter than the outgoing 7-speed, with a smaller clutch module allowing for 35% more torque.

In addition, the Roma features the latest version of Ferrari’s Side Slip Control. That uses a whole slew of electronic systems, including the E-Diff, to allow for the car to slide in a controlled manner — or intervene if the slide is in danger of no longer being controlled. Ferrari says this makes the car “extremely entertaining to drive”. 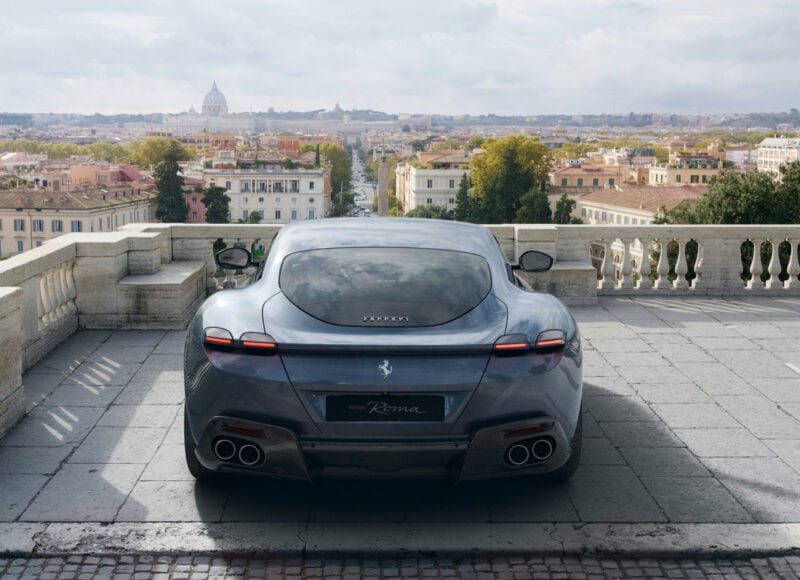 The Roma takes inspiration from classic Ferrari GTs of the 1960s, and that means far less fussy exterior lines than we’ve recently seen from the brand. That left Ferrari with a quandary over how to produce the downforce needed for a 200mph GT.

That’s solved with a dynamic rear wing that’s actually part of the rear screen itself. This can deploy in three positions, called Low Drag (LD), and Medium and High Downforce (MD and HD). At speeds below 60mph, the wing sits in LD, then deploys into MD, where it generates 30% of maximum downforce at the expense of 1% extra drag. When the Roma exceeds 186mph, the wing automatically moves into HD, sitting at a 135-degree angle to the rear screen. This produces 210lb of downforce.

The wing will also move into HD configuration during heavy braking, and may be used in certain modes at the driver’s request too. There’s also new vortex generators under the front end, balancing out the extra downforce from the rear wing. 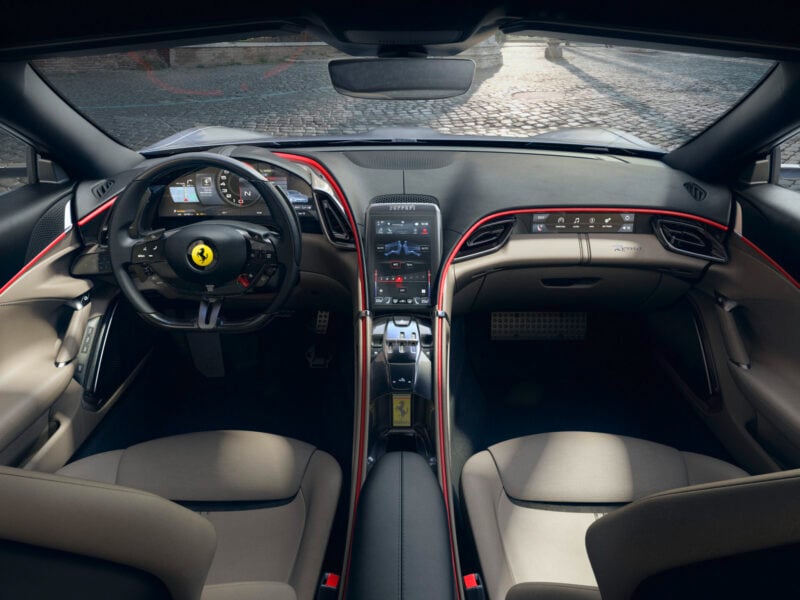 Ferrari’s new images reveal a completely redesigned interior compared to the Portofino. Rather than the usual driver-focused layout, Ferrari has opted for a more symmetrical model for the Roma. There’s a 16-inch HD screen for the instrument cluster, and a new, portrait-mounted, 8.4-inch display for the infotainment. The passenger also gets an optional 8.8-inch touchscreen, allowing them to operate navigation and audio functions without having to reach into the center of the car.

The images also show that “2+” means a 2+2, if the +2 are pets, luggage, or shopping. There are two rear seats, but they appear almost uninhabitable for humans. Nonetheless, the whole interior is well-appointed, with extensive use of aluminum, carbon fiber, full-grain leather, and Alcantara.

Ferrari is also offering an optional, extended, seven-year maintenance program, to cover the car’s first years. This even continues through to subsequent owners, and is available in all markets worldwide.

All that’s left for Ferrari to reveal is the price, which we’d estimate at somewhere just above the $200,000. First deliveries should start around this time next year.