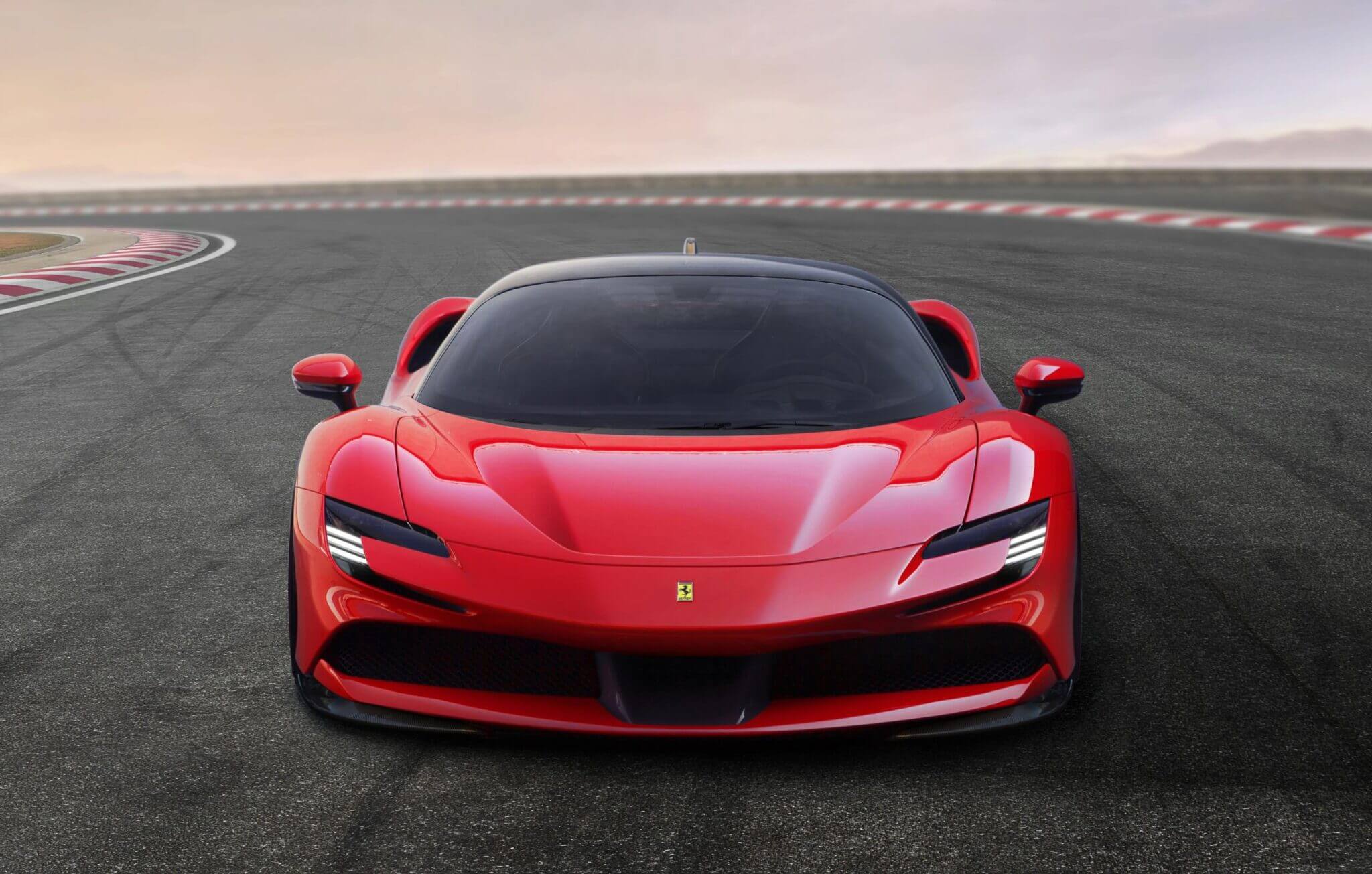 The car is Ferrari’s first full series production plug-in hybrid vehicle (PHEV), and also the first of its V8, mid-engined sports cars to use a four-wheel drive system. It uses a hybrid petrol-electric powertrain, with a bored out, four-liter, 769hp variant of its award-winning twin-turbo V8 paired to a trio of electric motors.

Two of the motors drive each of the front wheels independently. This means that when running in pure electric mode, at speeds up to 84mph, the SF90 Stradale becomes a front-wheel drive car for the first time in Ferrari history. Unusually, these motors also control the car’s reversing function, meaning that Ferrari could eliminate a reverse gear from the car’s new, eight-speed gearbox to save weight.

A third motor sits between the ICE and the gearbox. This acts just like the MGU-K system in Ferrari’s racing SF90. Combined power output from all three motors in “performance” mode is 217hp, giving the car a complete system output of 986hp, and 663lbft of torque. 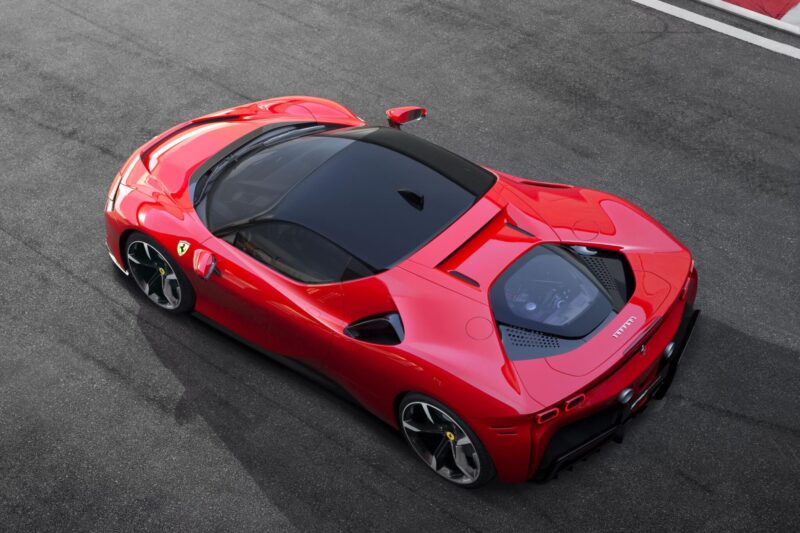 The 7.9kWh battery pack and motors do put a significant amount of weight into the car. In total, the electronics come in at a meaty 600lb, so Ferrari has had to come up with some solutions to keep the weight down.

This includes an all new chassis, which mixes aluminum and carbon fiber. Ferrari has used new hollow castings and “quiet aluminum” to not only deal with the four-wheel drive and hybrid systems, but also keep vibrations and weight down. According to its figures, the SF90 Stradale chassis has a 40% higher torsional rigidity than predecessor platforms.

Ferrari quotes a dry weight for the SF90 Stradale of 3,460lb, although this is likely to rise to near 3,750lb with fluids and driver. That still equates to nearly 590hp/ton and that translates to some pretty sharp performance figures. 60mph comes up in a mere 2.3s, and it’s doing twice that just over four seconds later. Top speed is 211mph, and Ferrari says braking from 60mph to rest happens in just six car lengths. 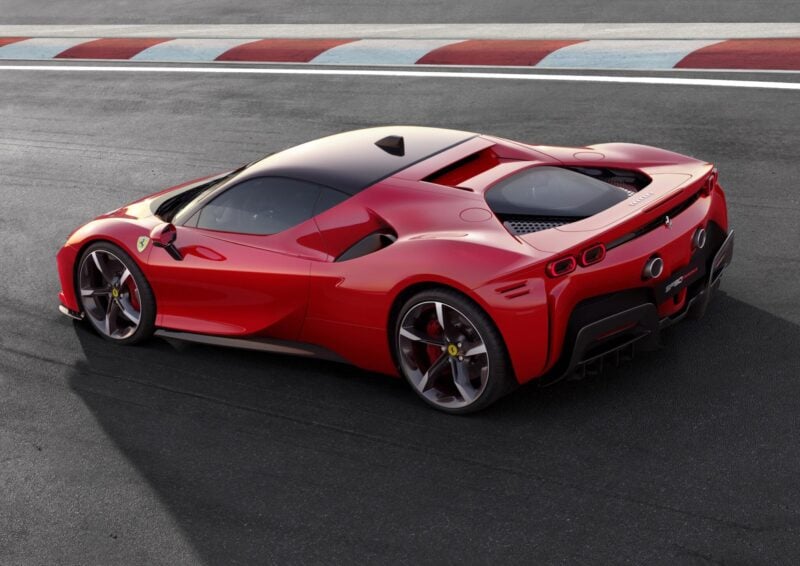 There’s some serious work on the car’s aerodynamics too. The nose bears a similar appearance to the S-Duct on the 488 Pista and F8 Tributo, but Ferrari says it’s honed the system even further. More interesting is the treatment at the rear, where the SF90 Stradala employs a “shut-off Gurney”.

This system keeps the rear-end flush at normal driving speeds, but retracts into the car for high downforce situations — direction changes and heavy braking. That has the effect of exposing the fixed rear section to airflow and creating downforce.

Even the car’s wheels involve wings. Ferrari has designed the wheels in such a way as to act like rotors, pulling air from inboard through the wheel and out to create a smooth airflow down the sides. 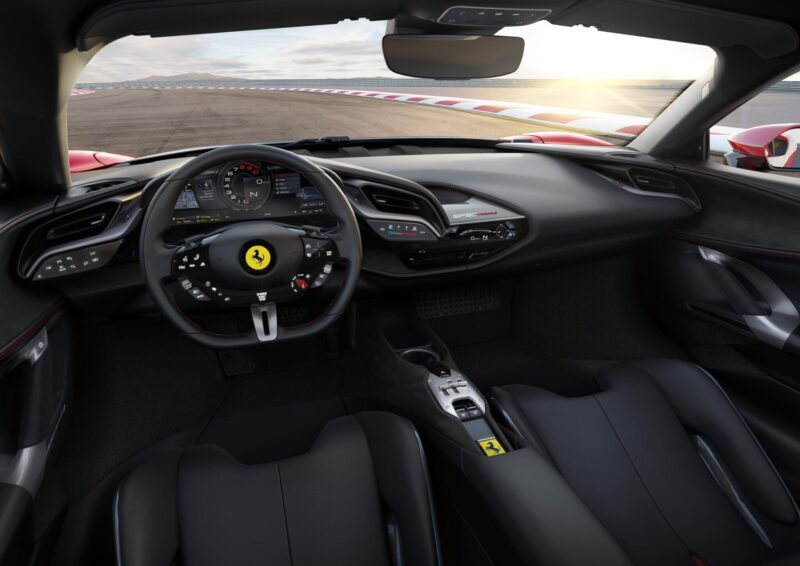 The SF90 Stradale’s cabin includes a new instrument display and a new head-up display. The former is a curved, 16-inch, fully digital HD display, the first of its kind in a production car. It incorporates a rev counter dead center, with a battery indicator alongside, and audio and navigation information either side — although the drive can customize this display.

You’ll find the usual Ferrari-style array of switches on the steering wheel, including headlights, windscreen wipers and the “Manettino” drive mode selector. There’s also touch controls with haptic feedback that allow the driver to deal with almost all vehicle functions and information.

Ferrari is yet to reveal prices for the SF90 Stradale, but it’s rumored to be somewhere between the current flagship 812 Superfast and the holy trinity member La Ferrari. That puts it at around the $600,000 mark, with the first customers — 2,000 of which were at the unveiling — getting their keys at the start of 2020.

It was only a few weeks ago that Ferrari announced its last ever pure fossil fuel V8 sports car. The Maranello outfit intended the F8 Tributo to be, just as the name suggests, a tribute to the Ferrari eight-cylinder.

Even for Ferrari, it seems that electrification is the way forward. Today, a couple hours ahead of the official reveal, we get the chance to look at the next generation of Ferrari sports cars: the hybrid SF90 Stradale.

Right now, information on the car is a little scarce, as it’s ahead of the official launch. While definitely a hybrid, early information is split between whether the combustion engine is that twin-turbo, 3.9-liter V8 or a new V6. Either way, Ferrari pairs the ICE with three electric motors to provide a reported 1000hp.

That’s essentially the same sort of power output as the La Ferrari hypercar, and outstrips anything else Ferrari makes right now. We’re expecting suitably devastating performance figures too, down near two seconds flat for a 0-60mph run. Top speed is likely well north of 200mph, although from spy shots during testing the car has a pretty reasonable zero-emissions range too.

If the SF90 name seems familiar, that’s because it’s also the name of Ferrari’s current F1 car. Motoring enthusiasts won’t need any reminded that “stradale” is Italian for “street”, indicating a road car.

In terms of design, the SF90 Stradale seems to borrow heavily from the F8 Tributo and 488 Pista playbook. There’s a variation of the front “S-Duct” to provide downforce, and huge intakes either side at the rear, probably necessary to cool the battery packs.

The quad-round tail light setup on the Tributo seems to have given way to a quad-quartic — squares with rounded corners — array instead. For the SF90, Ferrari has moved the twin exhausts inboard and up to the car’s horizontal centerline, above the license plate. This is quite reminiscent of the McLaren 720S, and McLaren itself is working on a similar hybrid supercar.