Where Do You Think Horizon 6 Will Take Place?

I am not voting for Japan. I’ve been burned too many times. I think I’ll vote for West Africa.

Georgia (Caucasus). Probably won’t happen, but it should

The FH journey so far has been America>Europe>Oceania>Europe>America.

They finally closed the loop going back to where it all started. Right now that means so far 2 FH have been located in America, 2 in Europe, and since Oceania has already been essentially done with Australia (I don't think they will go again for New Zealand for example, plenty of really new places to explore first) we are still missing the entirety of Asia and Africa, to start with. So if they start another loop, it will not follow the logic of the first since that would mean going back to Europe, leaving those continents aside yet again.

So, long story short, my probable guesses for FH6 would be:

-Japan (The obvious choice at this point, but if they eventually do Asia, unless they want to be creative and feature Korea, Malaysia, India, or maybe something more original for example, this is it)
-Madagascar/Réunion (Or any other place in Africa, I wouldn't be surprised if they decide to do so to start here, The Grand Tour already shown why)
-Canary Islands (Again, I don't think they will go back to Europe any time soon after FH2 and FH4, but when the time comes, would be a great idea I think. Ibiza has already been done for TDU2, and would be a good creative choice. If not, well...many, many other places or even countries they can compress into a FH map, so who knows)
-Every single island in central/south America, plenty of choices...unless they go for a whole mainland country again.

It's hard to tell since they don't go for actual 1:1 replicas of the real place, like TDU. That would limit things up to a certain point, since that involves going to an island to have natural and easy to do game limits (in fact, the upcoming new TD could use any of the previous ideas nicely because of this reason) but since PG can squeeze any country into a custom map, everything is possible, unless they take the TD route. The easier question would be what continent, and again, Asia or Africa would be the first choices for sure.

Ugh. I can’t make changes to the poll, but “Asia” was supposed to be “Asia (Southeast)” and there should have been a choice for Korea. Sorry.

I'm sticking with South Africa so those who want Japan get further annoyed.

I’d like to see and vote for Japan but I believe PG’s going to exhaust the current formula with locales that can provide fast sweeping roads mixed with large off-road sections before they even going to consider it.

My bet is on either Canada, New Zeeland or South Africa. Or any optional former British colony.
Last edited: Jun 20, 2021

I'm really hoping it will be in Japan, but for some reason I have a feeling PG won't do a Forza game in Japan.


Another European experience would be fun, maybe covering the region that envelops the Alps.

I guess I'll wait to see what kind of driving experiences the first EP will offer and make a, huh, less uneducated guess then.

Horizon 3's Blizzard Mountain was all about snow (prototyping for seasons), and Horizon 4's Fortune Island featured the to-date highest elevation differential in the history of the series, extreme weather and some breathtaking cliffside offroad trails (all things we'll see in spades in Horizon 5). Perhaps Horizon 5 will keep up the trend?
Last edited: Jun 21, 2021

I can understand the feelings of those who want Japan, but that is not realistic.
I voted for Europa (Iberian Peninsula). The experience in Spain will be fun.

I'll throw my hat in and say I'd like to see Japan. However, I wouldn't be surprised if they end up picking a different part of Asia they feel they can capture better for what they want.

McLaren
I'll throw my hat in and say I'd like to see Japan. However, I wouldn't be surprised if they end up picking a different part of Asia they feel they can capture better for what they want.
Click to expand...

Certainly won't be China. Not without some major changes to appease CCP...

Whoever that one guy was, well done 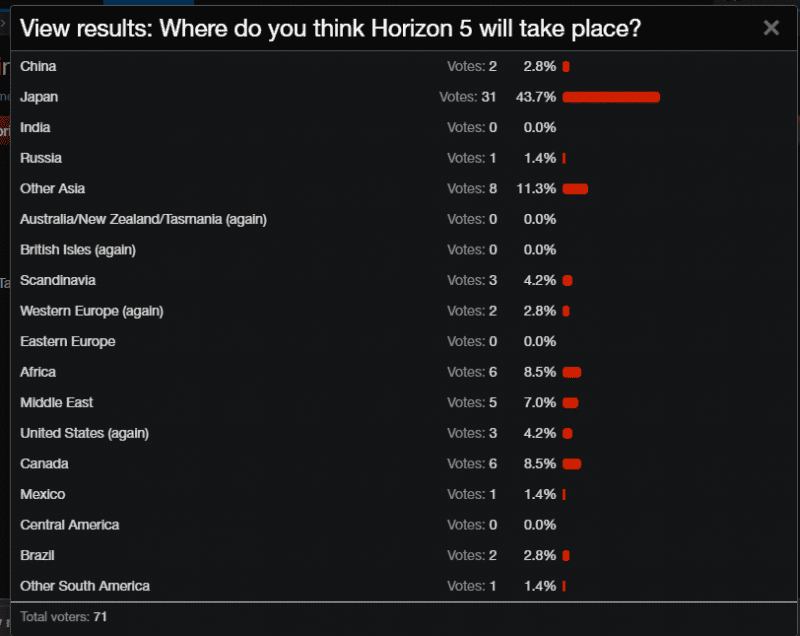 PJTierney
Whoever that one guy was, well done

It was @Populuxe Cowboy

Populuxe Cowboy
It's never too soon to start speculating. I decided to buck the trend and vote for Mexico. Amazing culture and diversity of terrain. It would be Horizon heaven.
Click to expand...

Famine
Certainly won't be China. Not without some major changes to appease CCP...
Click to expand...

I was wondering if Singapore was an option. IIRC, the country has a bunch of hills/elevation outside the famous city landscape?

Guess that means Senegambia and Lagos for the next instalment then 😳


McLaren
I was wondering if Singapore was an option. IIRC, the country has a bunch of hills/elevation outside the famous city landscape?
Click to expand...

I don't think so. It's mostly flat land and a fifth of it has been reclaimed with help from the Dutch. Plus the equatorial location means it's pretty much the same weather all year round.

UKMikey
I don't think so. It's mostly flat land and a fifth of it has been reclaimed with help from the Dutch. Plus the equatorial location means it's pretty much the same weather all year round.

Ah. I Googled trying to see if there was any mountain terrain, but repeatedly got links for "Top 10 Hills" to visit in the country, so I assumed the region had some decent change in elevation.
Last edited: Jun 20, 2021

Planet Horizon, it will be a DLC for Starfield, trust me.

Anywhere but Japan - just to keep the salt train rolling. 😂

Nacho Libre
Planet Horizon, it will be a DLC for Starfield, trust me.
Click to expand...

I voted "other" so they can miniaturise cars and drive around blood vessels inside the human body. You heard it here first, race fans.

I think it'll be Japan. PG aren't stupid and they know what the fans want. I said in another thread, they're waiting for the optimum point to do it, with the next game likely being a full next gen release, I can't see it being anything other.

Japan will be such a taxing location for them to do, with pretty much every type of environment you can think of at the behest of the designers, its a high pressure location due to its demand and they'll want to get it absolutely right, cover every aspect that people desire from it. It wouldn't even surprise me if it's been begun already owing to the nature of the locale and I should think, the difficulty of licensing across the Japanese brands that will have to be featured.

It's also a polar opposite to Mexico. And each Horizon has taken a very big turn away from the last one in terms of its locale, Japan doesn't get much further away than Mexico.

PJTierney
Whoever that one guy was, well done

Now you know who to hold responsible if it turns out to be a dud.

It'll be whatever the leaked cars that get dug up by dataminers a year and a half from now will imply it is.

I prefer Canada 🇨🇦 over Japan. But than again, both countries feature winter seasons. 😰 I really don't want another FH4 situation again. I much prefer somewhere that has warm, winterless seasons, like a caribbean country. That'd be so cool!
Last edited: Jun 20, 2021

Populuxe Cowboy
I am not voting for Japan. I’ve been burned too many times. I think I’ll vote for West Africa.
Click to expand...

I'd like it to be Japan, but I don't think they'd be able to do a convincingly dense urban area large enough for there to be a big expressway with the hardware they're working with, and what's the point in setting it in Japan if you don't have an expressway to race on? But East Asia hasn't been done yet and it feels overdue. There are a ton of Asian countries other than Japan with vibrant car scenes and interesting scenery.

Considering it will most likely be on the new Forzatech engine and Xbox wants to continue its growth where it lacks globally, Japan would be likely, however I'd consider India or some other country that perhaps doesn't have huge console gamer footprint. Who wouldn't want to race on next-gen versions of the Shutoku highway? It's screaming for a game like Forza Horizon, not to mention the mountain roads.