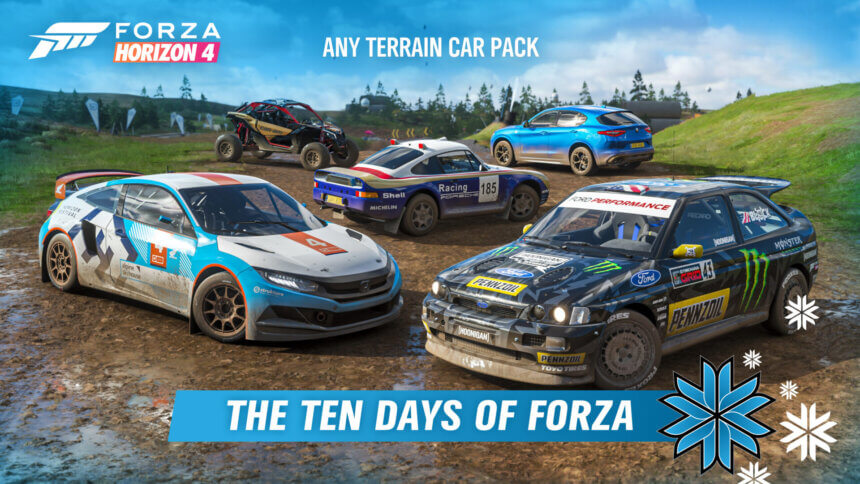 The festive season is well underway and Playground Games wants to spread some Christmas cheer around the Horizon Festival for the holidays. Announced on the official Twitter page, PG is hosting the “Ten Days of Forza” sweepstakes for Forza Horizon 4.

Every day until Christmas, PG will be giving away various prizes related to FH4. These include codes for DLC car packs, and even a copy of FH4 Ultimate Edition, among other prizes.

Welcome to the Ten Days of Forza! We're giving away a handful of codes for DLC packs, FH4 Ultimate Edition and more! Kicking things off: the Any Terrain car pack! #sweepstakes

How to enter:
Follow Us
RT This
Tag Three Friends

Kicking things off at time of writing is the Any Terrain Car Pack. This set of five cars was originally part of the Car Pass, but later found themselves grouped together into a separate DLC pack, for those who initially missed out.

The Any Terrain Pack includes the 1985 Porsche 959 Rally Raid, 1991 Hoonigan Ford Escort Group A, 2016 Honda Civic GRC, 2018 Can-Am Maverick X-RS Turbo R, and the 2018 Alfa Romeo Stelvio Quadrifoglio. That should just about cover any kind of loose-surface driving you had in mind.

Entry requirements are pretty straightforward. All you need to do is follow the Forza Horizon Twitter account, retweet the tweet shown, and tag three of your friends. PG will announce more prizes in the build-up to Christmas, so be sure to keep watch over the next couple of weeks.

If you missed out on the Car Pass and want to grab this car pack, then be sure to enter. You’ll have to hurry though as a fresh prize will be up for grabs tomorrow — and for each of the next nine days.

Forza Horizon 4
2 Comments Discuss this post in our forums...
Test Your Badge Knowledge With Our Car Logo Quiz