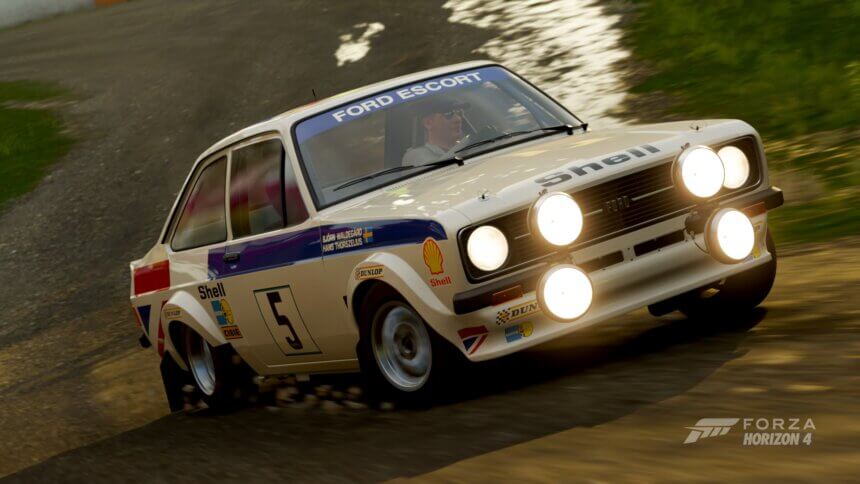 The icy blast of Winter has settled over the UK to mark a new season in Forza Horizon 4. Players can enjoy a frosty set of new events among the snow drifts.

Winter’s playlist update brings more prizes to the table for 50% and 80% completion. This week sees a rallying icon slide its way into the festival; let’s take a look at the content: 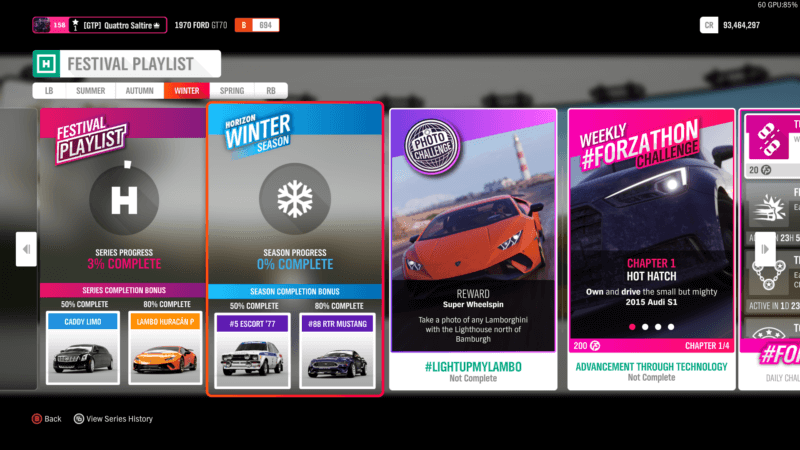 The big prize available this week is the 1977 Ford Escort #5 rally car. While the name doesn’t sound like much, the second-generation Escort is one of the most successful and popular rally cars of all time.

This particular Escort slid its way to victory in the Lombard RAC Rally at the hands of Bjorn Waldegard. Powering the Escort is a naturally aspirated 2.0-liter engine, making over 250hp. Along with an eager rear wheel drive chassis, the Escort will slide its way through the forest trails all day.

Sitting next to the Escort is Ford Mustang RTR #88 Formula Drift car. Designed to smoke the drift circuit, this Mustang has a Roush V8 making 1,000hp and enough torque to tenderize its rear tires in minutes.

Championship prizes are a mixed bag this week, including the Chevrolet Colorado ZR2 and the Caterham R500 FE.

The main standout prize comes in the form of the Lamborghini Aventador SuperVeloce. Building off the standard Aventador, the SV brings a weight reduction of 110lb and a power boost to 740hp. The SV also gains aggressive new aero to add to the visual drama.

To acquire the SV, you’ll need to win the “If You Wanna Be My Lambo” championship.

Sticking with Lamborghini, the latest Photo Challenge requires a raging bull. #LightUpMyLambo will need you to snap your Lamborghini at the lighthouse north of Bamburgh.

Listed below are this week’s events and prizes.

If You Wanna Be My Lambo

Chevy To The Levee

The Trial: Snowed Out (Co-Op Championship) 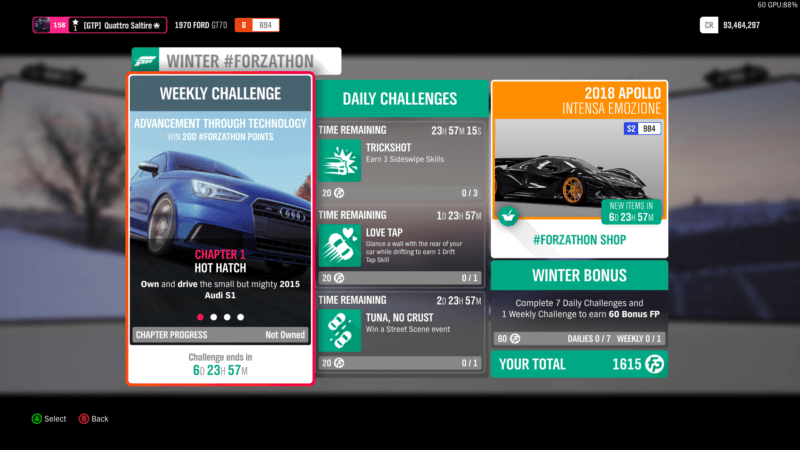 Forzathon challenges look at Audi this week, with the spotlight focused on Ingolstadt’s smallest S model: the 228hp Audi S1. Jump into this teutonic pocket rocket to get started.

Next up, hit the streets and take the S1 to victory in 2 Street Scene events. After that, push the S1 to the limit as you’ll need to hit the 155mph top speed.

Finally, channel the spirit of the Group B S1 and take the modern equivalent to victory in 2 Dirt Racing Series events. 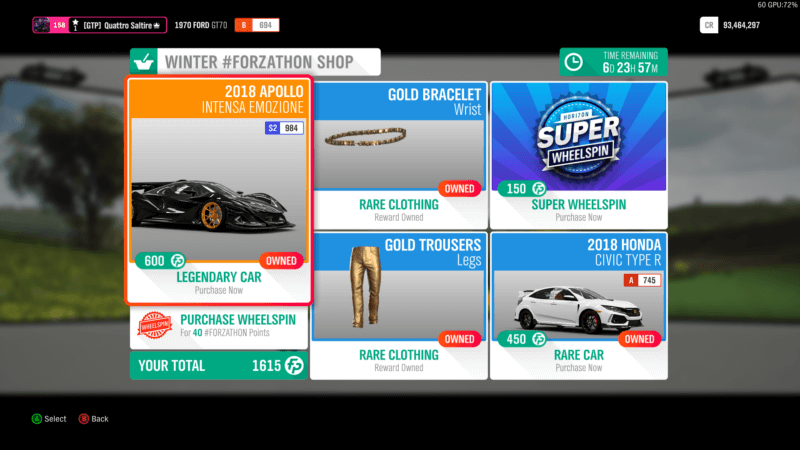 The shop lineup this week is all about extreme style. Leading the way is the 2018 Apollo Intensa Emozione.

This insane monster pays tribute to the GT1 cars of the 1990s. Powered by a 6.3-liter V12, the Apollo puts down nearly 800hp. If you can get all that power to the icy road, then the Apollo’s downforce will take over to carve up corners.

The Apollo will set you back 600 Forzathon Points. If you’re after a track weapon that looks unlike any other, then the Apollo is the machine for you.

On the more affordable end of the extreme styling scale is the 2018 Honda Civic Type R. The FK8 generation has quickly established itself as one of the hottest hatchbacks around.

Under all those slashes in the body sits a 2.0-liter turbocharged VTEC engine, putting 316hp through the front wheels. Thanks to heavily revised suspension, the Civic will put even four wheel drive rivals on notice.

You’ll need 450 FP to buy the CTR. If you want to demolish the hot hatch opposition, then the Civic will do the job.

Avatar cosmetic items available this week are the Gold Bracelet and Gold Trousers.

Forza Horizon 4 4 Nov 26 by Gary Slater
Thanksgiving is a time for celebration, and Forza Horizon 4 wants to give thanks to players with the newest Autumn season. There’s no turkey hunting, but there are plenty of…