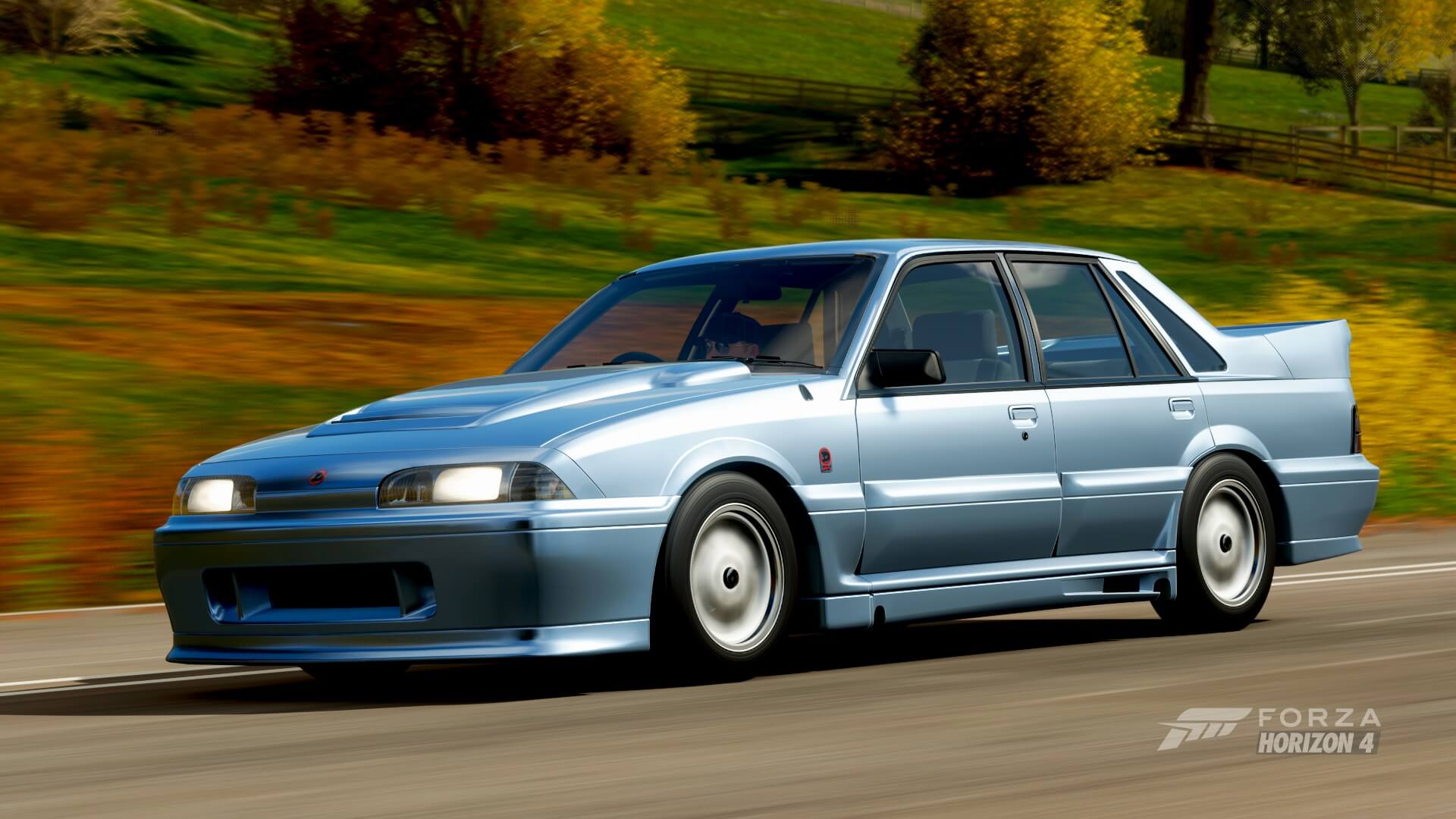 Autumn may bring cooler temperatures to Forza Horizon 4 this week, but the latest batch of content is turning up the heat. Players can also try out new events that continue to bring back Forza Horizon 3 memories.

A new update for the Festival playlist digs back into the archives for 50% and 80% completion prizes. This week, an Aussie touring car legend returns to the festival. Let’s check out what content Autumn is providing. 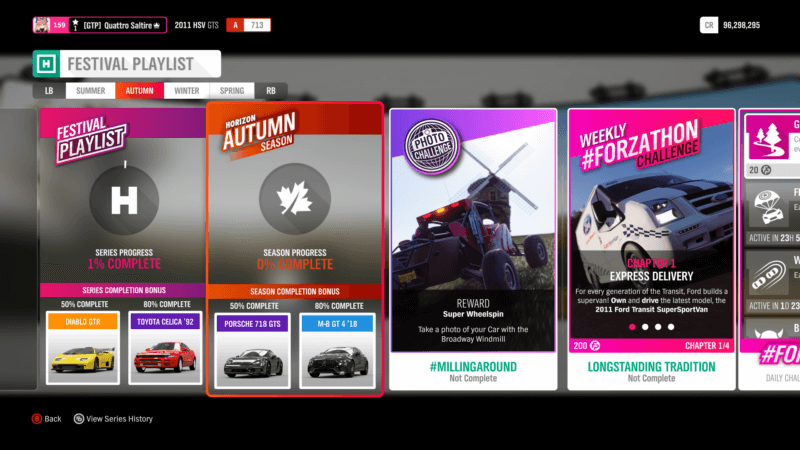 HSV Rolls Back The Years

Returning content once again dominates the playlist completion prizes for Autumn. Sitting at the center is the Porsche 718 Cayman GTS.

Normally considered as the sweet spot, the Cayman GTS offers performance above the standard car without muscling in on the Cayman GT4’s territory. Unlike the GT4, the 718 GTS features Porsche’s controversial 2.5-liter, turbocharged flat-four. With 361hp and a PDK transmission, the GTS has serious pace.

If you want more practicality from your sports car, there’s the 2018 Mercedes-AMG GT sedan. This swoopy fastback is more than just an AMG GT with two extra doors. The 4.0-liter, twin-turbocharged V8 has been boosted to 640hp, and the addition of four wheel drive makes this a proper all-weather super sedan.

Autumn’s Photo Challenges takes the form of #MillingAround. It’s a simple objective this week: snap the car you’re driving with the Broadway Windmill.

Seasonal championship prizes for Autumn include the Lamborghini Centenario and the 1994 Toyota Celica.

Taking the spotlight is the 1988 Holden Commodore VL Group A. Built as a homologation model for Group A touring cars, this Commodore was the first car to come from the skunkworks of Holden Special Vehicles — and became a legend on the Australian race track. A 241hp 5.0-liter V8 powers this brute, along with plastic body panels that reduced weight and improved aerodynamics.

In order to receive the VL Commodore, you’ll need to win the “Holden Your Horses” championship.

Throwbacks to Forza Horizon 3 continue with the latest Showcase Remix. “Freight Expectations: Round 2” will have you jump into the Chevrolet Camaro Z28 for a fresh bout against a train: the famous Flying Scotsman. 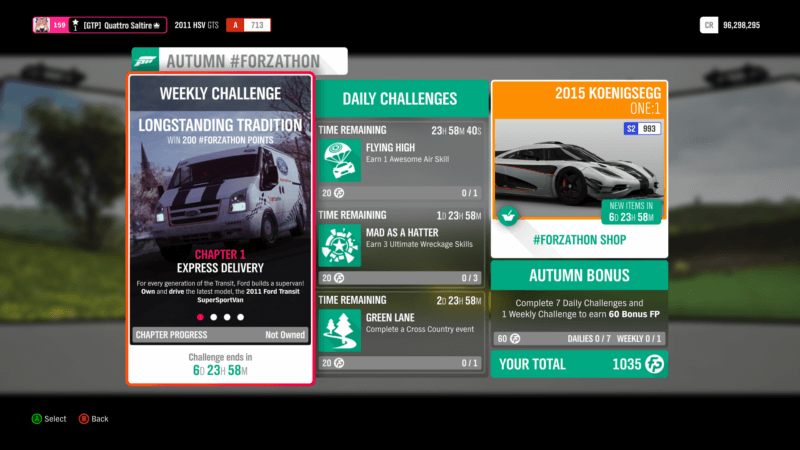 Stepping away from the Horizon Australia theme, Forzathon looks at an unlikely performance car this week: the 2011 Ford Transit SuperVan. Climb into this British institution to kick things off.

Next, show that the Transit is more than just a working van, by winning 2 Road Racing Series sprint events. Afterwards, cause some havoc by earning 10 Binman skills.

Finally, rule the road and muscle your way to earning 10 Trading Paint skills to wrap up this week. 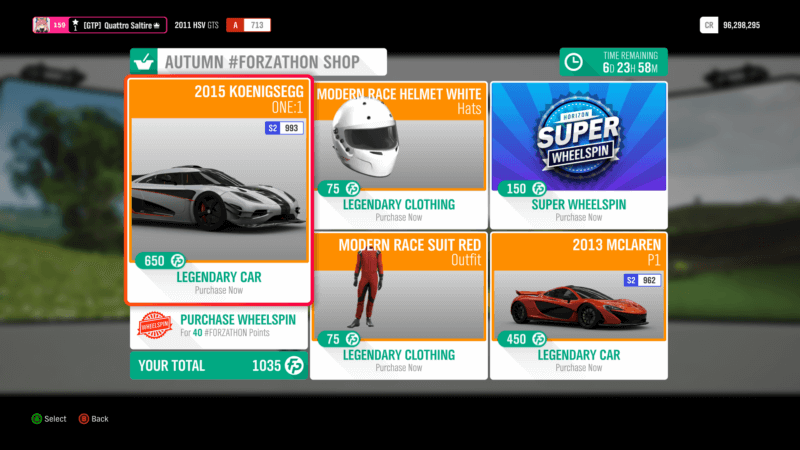 It’s all about hypercars in the Forzathon shop this week. Taking center stage is possibly the most hyper of them all; the 2015 Koenigsegg One:1.

Based off the already bonkers Koenigsegg Agera, the One:1 is the first production hypercar with a power to weight ratio of 1:1. Power from the 5.0-liter, twin-turbocharged V8 stands at 1,360hp along with a weight of 1,360kg (2,998lb). With such colossal firepower at your disposal, the One:1 demands the very best of your driving skill.

The price for all the speed? 650 Forzathon Points. If you find a Bugatti too boring, then the One:1 will provide the thrills that you seek.

Joining it is the 2013 McLaren P1. Regarded as part of the “Holy Trinity” of hypercars, the P1 is part of an elite group that ushered in hybrid power to boost performance. The combination of a 3.8-liter, twin-turbocharged V8 and an electric motor mean the P1 makes 903hp. With advanced active aerodynamics, the P1 should stick to the road as you fire it through the countryside.

The P1 will set you back 450 FP. If you want to fly the UK flag in battles against the LaFerrari and Porsche 918, then the P1 is ready to roll. 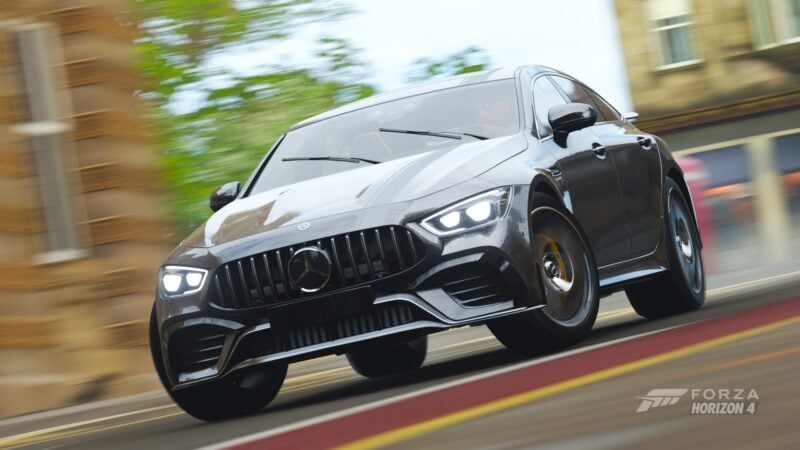