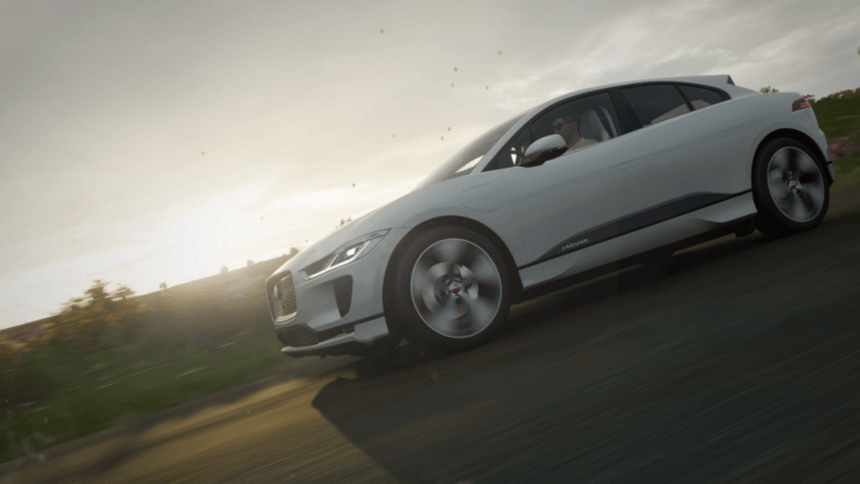 The sun is starting to set as the colors of autumn bleed across Forza Horizon 4 for a fresh season. Across the UK, sparks are flying in more ways than one.

Autumn’s update for the Seasonal playlist brings prizes new and old for 50% and 80% completion. As an electric big cat prepares to pounce this week, let’s dive in to the latest offerings. 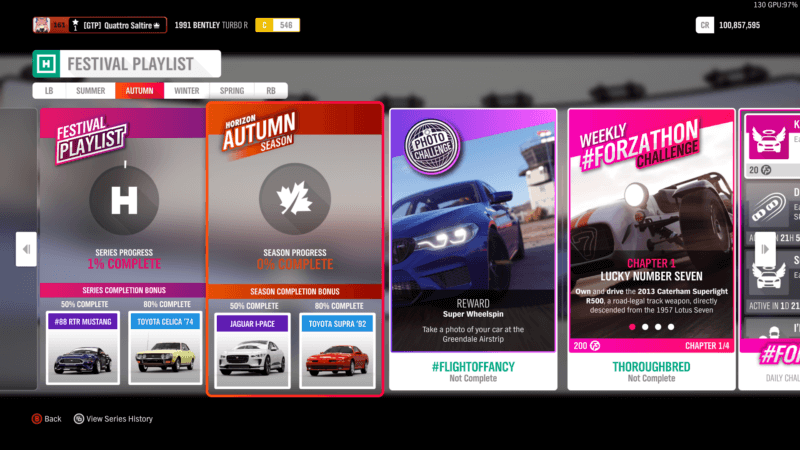 Sneaking in to lead the prizes this week is the 2018 Jaguar I-Pace. This all-electric SUV sets a template for the future of Jaguar’s models.

Underneath the concept car styling sits the familiar EV recipe: a 90kWh, floor-mounted battery pack sends power to an electric motor on each axle. Together, the I-Pace’s motors put out nearly 400hp, and acceleration to rival sports cars.

Joining it is a more traditional sports car in the form of the 1992 Toyota Supra. The third-generation “A70” Supra is arguably one of the coolest models to bear the Supra name — after all, the A80 and A90 don’t have pop-up lights…

Under the hood lies a 2.0-liter, twin-turbocharged straight-six, producing — a rather paltry by modern standards — 206hp. With some upgrades, this Supra will be able to slay the competition.

#FlightofFancy is the theme for this week’s Photo Challenge. You’ll be required to snap your car at the Greendale Airstrip. Autumn’s seasonal championship prizes include the Aston Martin Vulcan AMR Pro and the 2019 BMW Z4.

The main highlight this week is a blast from the past. The 1933 Napier Railton is the result of marrying an aircraft engine to a 1930s’ grand prix car. That aircraft engine is a colossal 24-liter W12 putting out 564hp. With 90-year old technology, the Napier will be a real handful to get the best out of it.

If you want the Napier, you’ll need to win the “An Old Hand” championship.

There’s a familiar returning Showcase Remix this week with “Pillar of Autumn”. You’ll be suiting up as Master Chief and racing the Halo Warthog against a Pelican dropship. This sort of thing happens all the time in the real UK too.

You can find the latest events and prizes below: 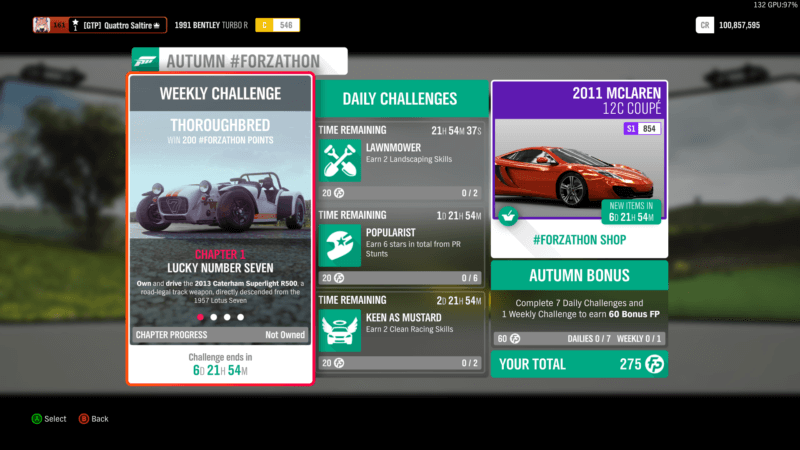 Forzathon celebrates one of the icons of raw British sports cars this week by highlighting the insane Caterham Superlight R500. Clamber into this featherweight rocket to get started.

Next up, take advantage of the Caterham’s diminutive dimensions and earn 5 Threading The Needle skills. Afterwards, use your light weight to spread your wings, as you’ll need a total of 9 stars from Danger Signs. 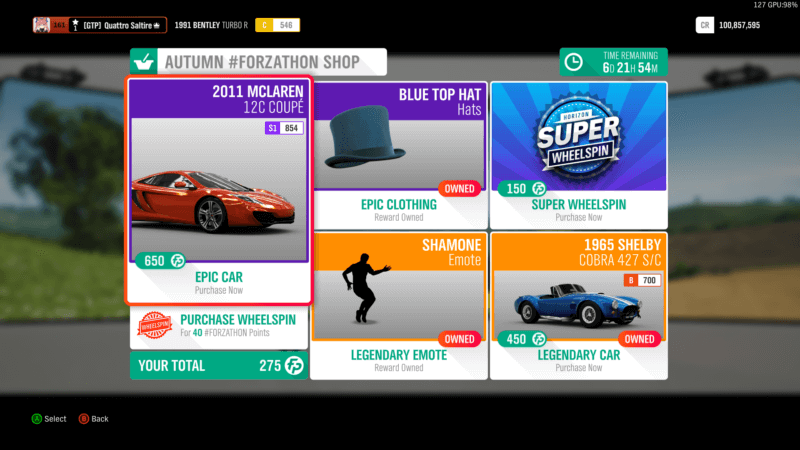 High performance is the name of the game in the latest shop lineup. Taking center stage is the 2011 McLaren 12C.

The first road car to come from Woking since the mighty F1 sets its sights squarely on the Ferrari 458 Italia, and has the firepower to back up the talk. The 12C comes with an in-house built, 3.8-liter, twin-turbocharged V8 making 592hp. A host of technology derived from Formula 1 ensures the 12C will leave the Italian stallion in its wake.

You’ll need to fork out 650 Forzathon Points for the 12C. If you don’t like the more complicated looks of the 650S and 720S, then the cleaner design of the 12C will make this a tempting offer.

Alongside it is the wild 1965 Shelby Cobra 427. What began as a humble AC Ace, the Cobra features a beefy 7.0-liter V8 with almost 450hp. With a weight of under 2,400lb, the Cobra had supercar levels of acceleration during the 1960s. Sadly it also had kit car levels of handling, so the Cobra demands only the very best of your driving ability.

The price for such a wild ride is 450 FP. If you’re looking to save on buying one in the Autoshow, then this is a deal you don’t want to pass up.

Novelty items this week include the “Shamone” emote and the Blue Top Hat.

Forza Horizon 4 Season Change
6 Comments Discuss this post in our forums...
Test Your Badge Knowledge With Our Car Logo Quiz