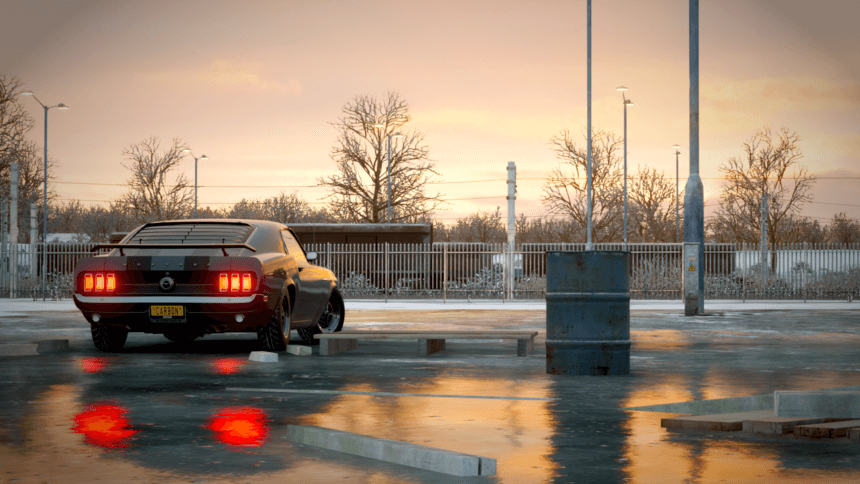 Snow has returned to cover the UK and mark a new Winter season in Forza Horizon 4. Players will have a new set of events among the snow drifts to tackle as well as updated content.

Although there is no new content this week, there are still returning prizes to the Winter Playlist at 50% and 80% completion, along with another chance to win a fire breathing Mercedes sedan. 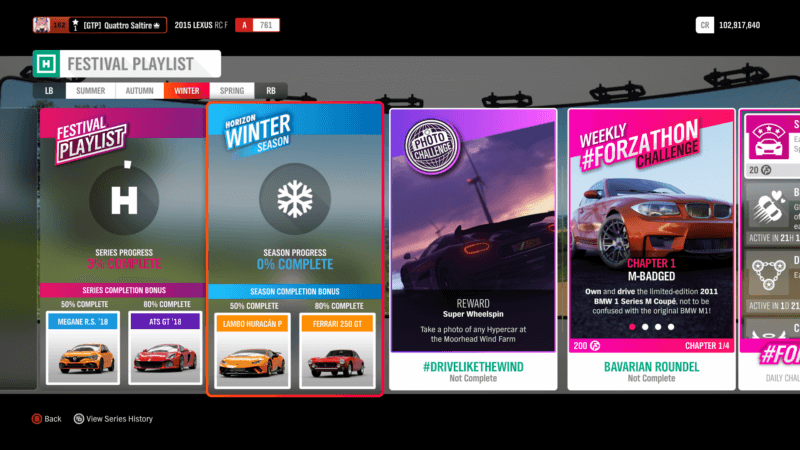 Taking In The Winter Views

A mixed bag is part of the Winter Playlist prizes this week. Making a very orange statement is the 2018 Lamborghini Huracan Performante.

Lighter, harder and more powerful, the changes to create the Performante help to elevate it to among the best against its rivals. A weight cut of 88lb complements a boost in power for the 5.2-liter V10, with the Performante throwing out 631hp. The Huracan also has a very clever active aero system under the skin — and a less subtle fixed rear wing — allowing it to devour corners with alarming pace.

For those who want to slow down while looking cool, there’s the 1962 Ferrari 250 GT Berlinetta Lusso. Widely regarded as one of the most beautiful GT cars ever created, the 250 GT’s elegant lines make it perfect for cruising by the shoreline. Providing the power is Ferrari’s iconic 3.0-liter V12 producing 254hp. In a car as gorgeous as this, it’s all the power you will ever need.

Seasonal championship prizes this week include the 1996 Chevrolet Impala and the imposing 2012 Cadillac Escalade.

The main highlight this week is the 2018 Mercedes-AMG E63 S. Merc’s M5 fighter has been given a raft of updates to put it at the top of the fast executive sedan tree. The 4.0-liter, twin-turbocharged V8 makes a supercar-worrying 603hp. Coupled to a clever four-wheel-drive system, the E63 may just be the ultimate all-weather super sedan.

You’ll need to win the “Put To Work” championship to obtain the E63.

Winter’s Photo Challenge is about polar opposites. #DriveLikeTheWind requires you to picture your thirsty, gas-guzzling hypercar at the Moorhead Wind Farm.

The Winter events and prizes are below: 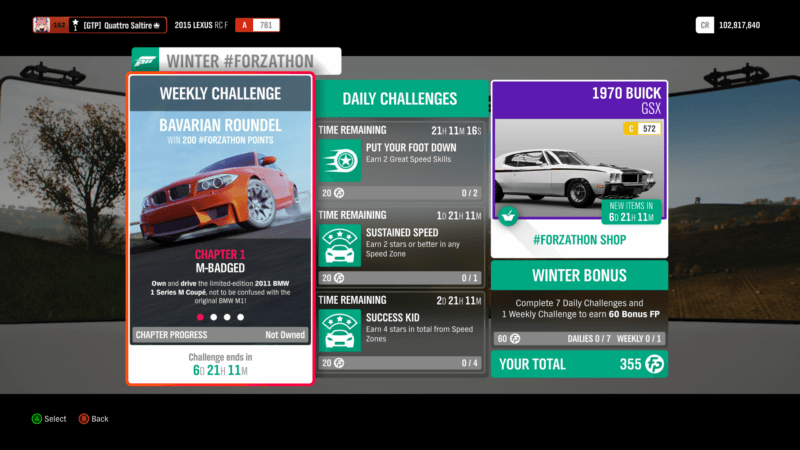 Forzathon takes a look at a baby BMW M car this week, but one that has become a cult hit: the 1-Series M. Climb aboard this junior M car and get rolling.

Next, show the 1M is no slouch by taking victory in 2 Road Racing Series sprint events. Afterwards, flex the 1M’s power in order to earn a total of 500,000 Skill Score to progress.

Finally, discover why the 1M is one of the best M cars by taking it on a 15-mile drive around the UK to wrap up this week’s challenges. 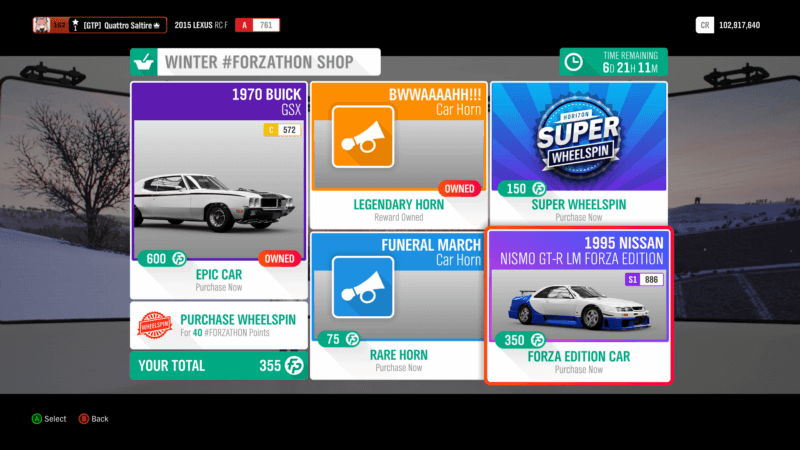 American muscle and a rare Japanese homologation special lead the way for the shop this week.

The 1970 Buick GSX is often forgotten about when it comes to big muscle cars. With imposing looks, it certainly has the visual appeal of its rivals. Along with a massive 7.4-liter V8 making 360hp, it has the grunt to match. Bolt on some modifications and you’ll be tearing up the drag strip in no time.

At 600 Forzathon Points, the price is steep for a car like this, so we advise looking towards the Auction House to get a better deal.

On the other end of the scale is the 1995 Nissan Skyline Nismo GT-R LM Forza Edition. The standard car only had one model ever produced in order to homologate it for GT1 racing. As a result the GT-R LM’s 2.6-liter, twin-turbocharged straight-six makes a relative small, by current standards, 300hp. It compensates by redlining at a howling 10,000rpm. The GT-R LM also ditches the four-wheel drive system to go completely rear-wheel drive. This Forza Edition model also comes with aero upgrades and an Event Influence boost.

At 350 FP, the GT-R LM is a steal when it comes to grabbing an incredibly rare Forza Edition machine.

Novelty items this week include the “Bwah” and the “Funeral March” horns.

Forza Horizon 4 Season Change
7 Comments Discuss this post in our forums...
Test Your Badge Knowledge With Our Car Logo Quiz