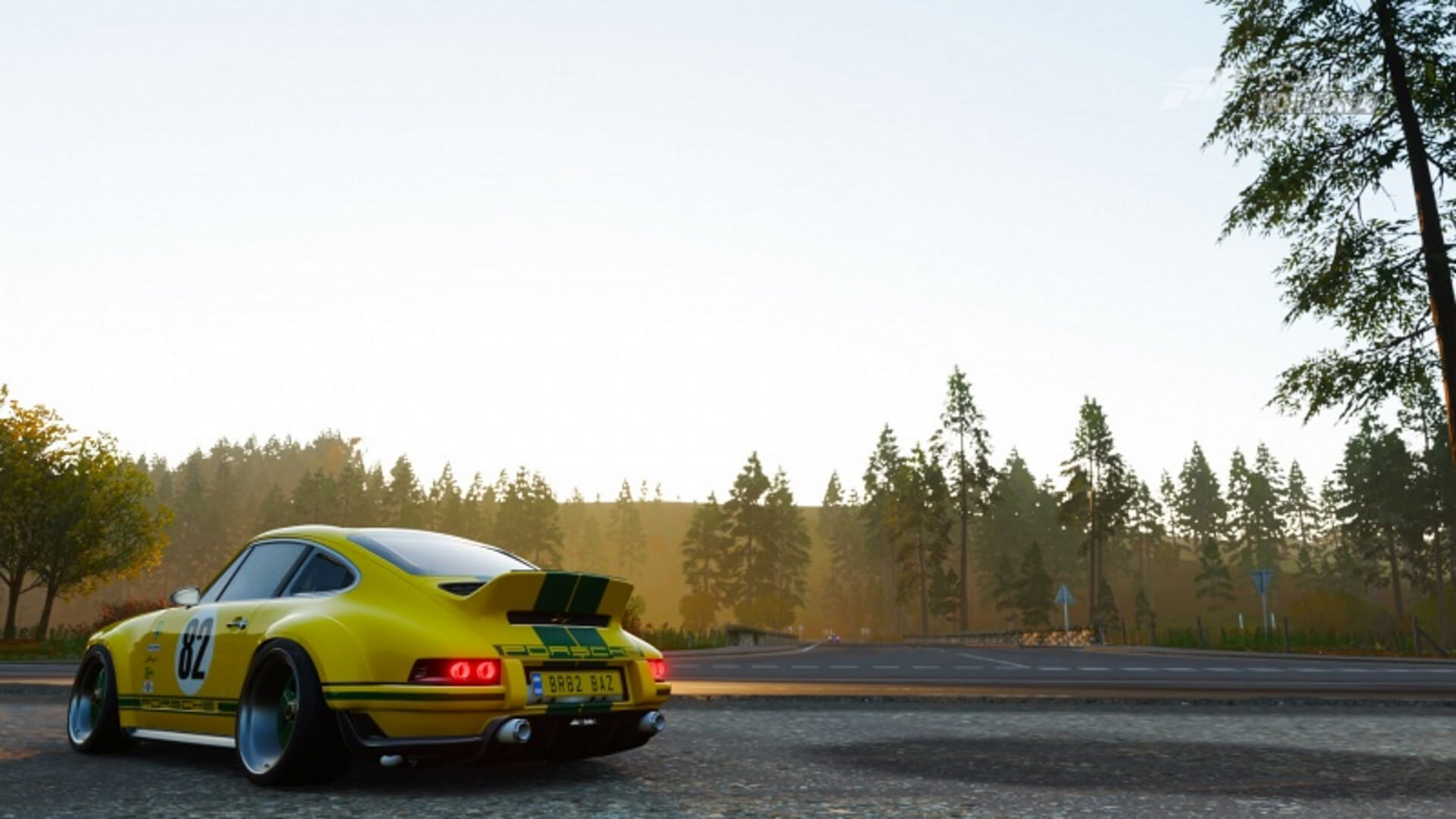 As the weather begins to turn and the leaves changes color, a new Autumn season has begun in Forza Horizon 4. There’s no plans to slow down soon, with more events and more content to win

Although there’s no new content this week, there’s another opportunity to win one of the most desirable Porsches ever made, along with fresh Playlist prizes for 50% and 80% completion. Let’s venture into the country to see what Autumn has in store. 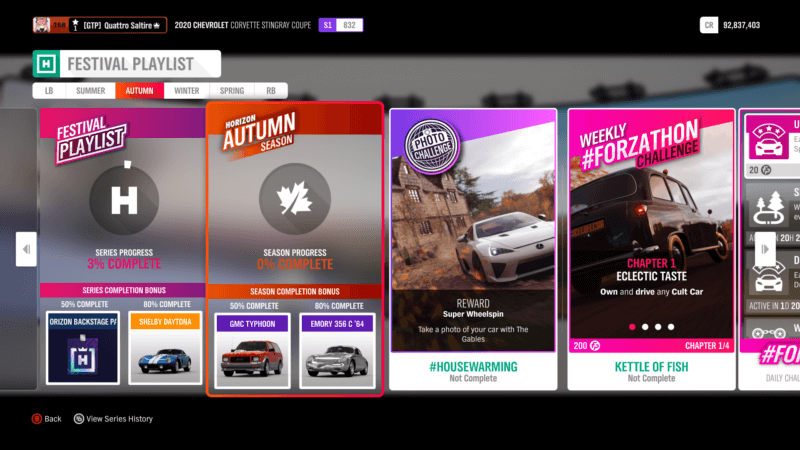 Leading a brutal charge in the Playlist prizes is the 1992 GMC Typhoon. As one of the world’s first performance SUVs, the Typhoon sacrifices off-road capability for pure performance.

That performance comes from a 4.3-liter turbocharged V6 making 280hp. Thanks to four-wheel drive traction, the Typhoon could accelerate faster than sports cars of the era.

For those after more style, there’s the 1964 Porsche 356 C. This particular 356 has been given a makeover by Emory Motorsports, splashing some modern touches to this timeless machine. Emory has given the 356 a custom designed 2.3-liter flat-four with 220hp. Along with modern suspension, the Emory 356 should surprise against even modern sports cars.

Autumn’s newest Photo Challenge is all about home, in particular the first house you receive in Horizon: The Gables. #Housewarming asks you to snap the car you’re driving at The Gables. Seasonal championship prizes include the Jaguar I-Pace and the Renault Clio R.S.16 Concept.

The big prize to aim for is a classic Porsche 911 worked on by Singer. Called the “Dynamics and Lightweighting Study” (or DLS), this 911 may well be the perfect resto-modded car. Providing the power is a 4.0-liter flat-six producing 493hp. With an all-carbon fiber body, the 2,315lb weight means that the DLS will keep pace with modern 911s.

If you want the DLS, you’ll have to win the “Supercars-On-Sea” championship.

Read on below for Autumn’s events: 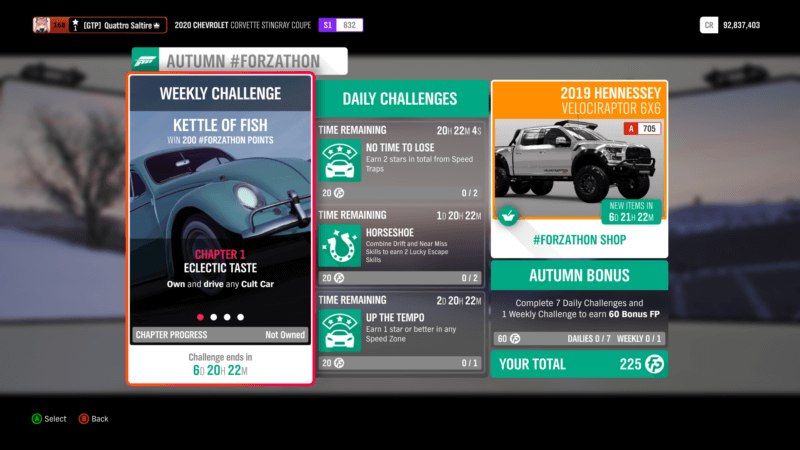 It’s all about the cult classics this week, as Forzathon puts the focus on the Cult Cars category. Jump aboard to get things started.

Next, show that your cult car still has some moves by earning a total of 500,000 Skill Score. After that, Head off to the races and take victory in a Dirt Racing Series event at White Horse Hill Trail.

Finally, swallow some brave pills and get 10 Daredevil Skills to finish up a fresh week of challenges. 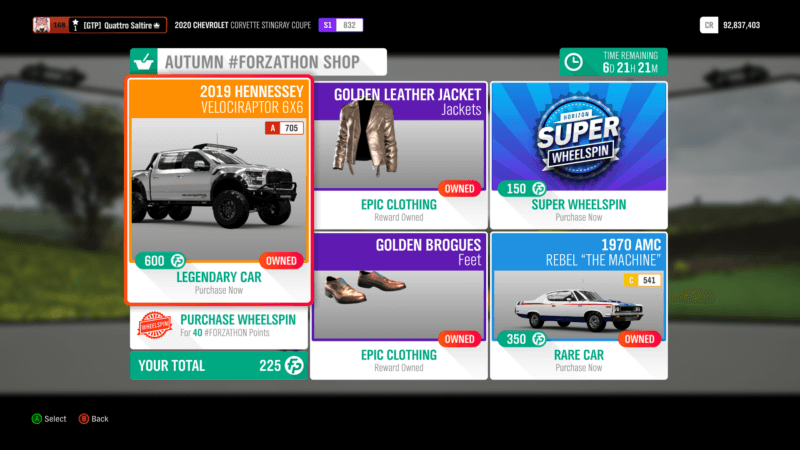 It’s all about America in the shop this week, with a massive Ford F-150 Raptor pickup truck taking center stage.

This particular F-150 has been breathed on by the power-mad tuners at Hennessey. That means the 3.5-liter twin turbocharged V6 now produces over 600hp. The biggest difference to this VelociRaptor is the addition of an extra axle to create a 6×6 monster.

At 600 Forzathon Points, the Hennessey is expensive, but you’ll be making a big statement in one as you leave the G63 6×6 in your wake.

Alongside the Ford is the 1970 AMC Rebel. Often forgotten about in the classic muscle car era, the Rebel would take on its rivals in its own fashion. Underneath the red, white and blue paint lies a 6.4-liter V8 making a punchy 340hp. With impressive quarter-mile performance, the Rebel was an underdog with a serious bite.

At 350FP, the Rebel looks like a bargain, especially if you’re after a muscle car but find the establishment to be too common.

Clothing items for purchase include the Golden Leather Jacket and the Golden Brogues.