As snow returns to the UK, a new week of Winter is back up and running in Forza Horizon 4. Racing does not stop as more new events and content are now available.

This week sees an obscure upstart electric hypercar sneak its way into the festival, along with more Playlist prizes for 50% and 80% completion. Put on your favorite beanie hat and let’s venture out to see Winter’s goods. 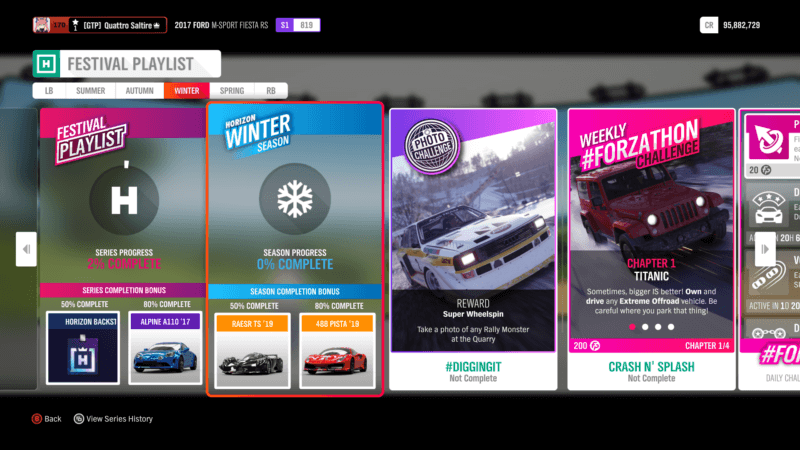 Big news in this week’s Playlist prizes is the debut of the 2019 RAESR Tachyon Speed. Despite looking like a cross between an F1 car and the Batmobile, the Tachyon is not an especially well-known car.

RAESR packs some serious and clever technology under the Tachyon’s wild skin . Instead of using two, three, or even four electric motors like most EV hypercars, the Tachyon has six. Combined they produce 1,250hp, but can give power bursts of over 1,800hp. Unlike other EVs, the motors in the Tachyon redline at just over 3,000rpm, helping contribute to a titanic 3,650 lbft of torque and a top speed of over 240mph.

Traditional enthusiasts can look to the 2019 Ferrari 488 Pista as an alternative. Channelling a thorough recipe of less weight and more power, the Pista is the most hardcore V8 Ferrari ever made. Weight is down by 90lb and the 3.9-liter, twin-turbo V8 is boosted to 711hp.

The classic Photo challenges continue for Winter this week. #DiggingIt is a throwback to Series 25. For this one you’ll need to snap a Rally Monster down at the Slate Quarry. In terms of seasonal championships, there’s a Maserati Tipo 61 and a Jeep Grand Cherokee SRT up for grabs.

One prize to look out for is the Audi TT RS. Designed to try and recapture the spirit of the original Quattro, the hottest TT turns things up a notch. Under the hood sits a 2.5-liter, turbocharged inline-five to further strengthen ties back to the Quattro. With 335hp and that signature four-wheel drive system, the TT RS can be a fly in the ointment of Porsche.

To win the TT, you’ll need to complete the “Getting Cold Street” championship. One of the most well-known Showcase Remix events also returns this week. Strap into the armored suit of Master Chief and prepare to race the Warthog against a Pelican dropship in a fresh run at “Assault on The Control Room”. 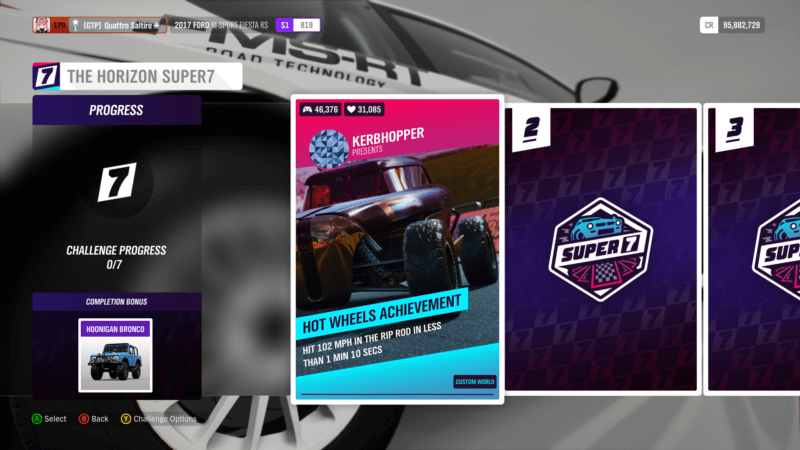 A fresh helping of challenges from Super7 is ready and waiting this week. Complete all seven cards to receive a wild Hoonigan Ford Bronco as the main prize.

Winter’s events are listed down below.

Tip of The Iceberg 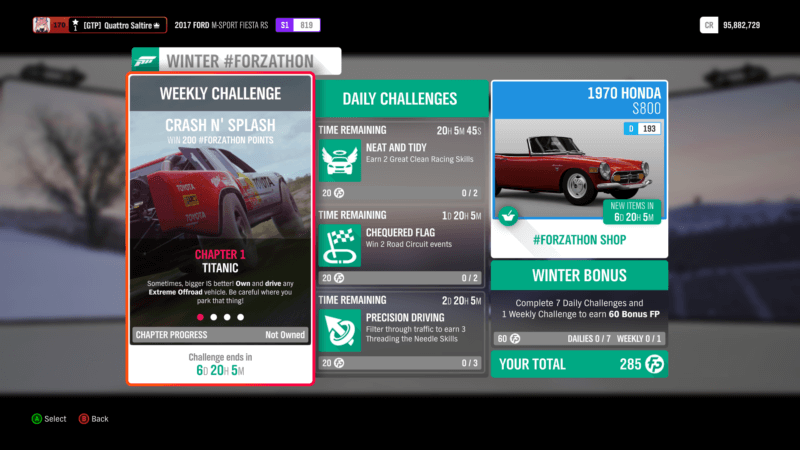 It’s time to get extreme as Forzathon looks towards Extreme Offroad racers this week. Jump aboard one of the many toughened machines to get started.

Next up, head off to the races and charge to victory in five Cross Country Series events. Afterwards, head towards a Speed Zone and earn a score of at least two stars to progress.

Finally, go and cause havoc across the country as you’ll need to earn a total of 10 Ultimate Wreckage Skills to finish up this week’s challenges. 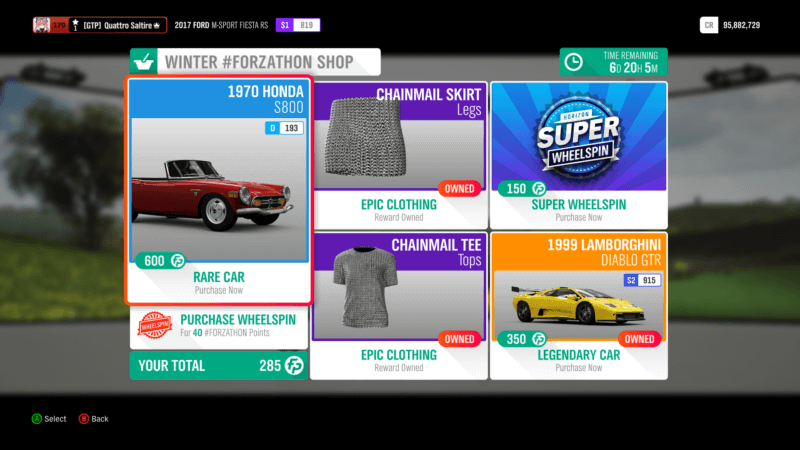 A tiny Honda makes big strides to the center of the latest shop lineup. The 1970 Honda S800 is regarded as a cult classic in Honda’s sports car lineup. It was also one of the marque’s first cars to hit 100mph. Utilising a 791cc engine, the S800 makes just 70hp, but strapped into a car weighing just over 1,500lb it makes for a joyful machine that wants to be revved all the way to the limit.

At 600 Forzathon Points, you’ll need plenty savings. In return you’ll be getting one of the coolest Honda sports cars ever made.

If you want something more wild, there’s the 1999 Lamborghini Diablo GTR. Built for Lambo’s own one-make racing series, the Diablo has been stripped down and made even more aggressive. Along with racing aerodynamics, the 6.0-liter V12 gets a power bump to 590hp. Despite the increased downforce, you’ll need to be in top form to wrestle with this beast.

The Diablo will cost you 350 FP. If you want one of the last truly old-school Lambos, then this Diablo will certainly be worth the investment.