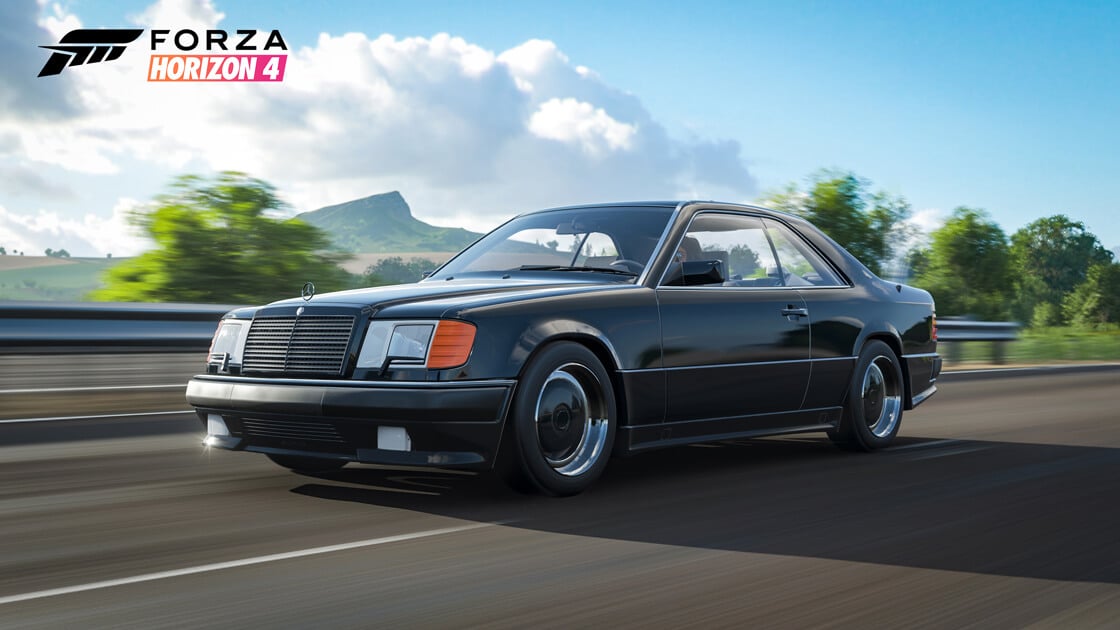 As the leaves return to the trees across the UK, another Spring season has begun in Forza Horizon 4. Series 29 is now in the endgame with one last batch of content left to get your hands on.

A legendary Mercedes thunders its way into the Spring festival, along with more Playlist prizes for 50% and 80% completion. With excitement already surrounding Series 30, let’s look into the final season for Series 29. 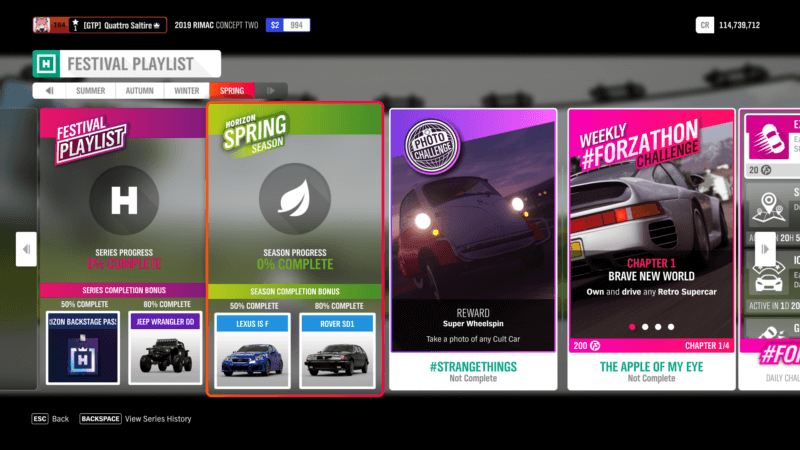 Returning to the Playlist prize pool is the Lexus IS-F. In order to shake off its austere image, Lexus decided to build a sports sedan to square up to the dominant BMW M3.

Under the hood sits a 5.0 liter V8 that puts out 417hp, sending that power through an 8-speed automatic; a first for a sports sedan. Along with more aggressive styling, the IS-F channels the character of a muscle car to ensure a riotous drive.

Standing with the Lexus is the Rover SD1 Vitesse. Rover’s flagship executive sedan brought looks that were inspired by the Ferrari Daytona. It also features the iconic 3.9 liter V8 making 191hp. With competition pedigree, the SD1 is one of the most unlikely performance classics to hit the road.

Series 29’s final Photo Challenge is all about cult cars. #StrangeThings wants you to take a picture anywhere around the UK with one of the Cult Cars available. Seasonal championship prizes feature the Napier Railton and the Ferrari F12tdf.

The main prize this week is one of the coolest cars ever made. The Mercedes W124 started out as a humdrum sedan, but tuning specialist AMG used it to put itself on the map. Nicknamed “The Hammer”, this AMG 300CE features a 6.0 liter V8 and 379hp. An E28 BMW M5 could only muster 282hp. With subtly menacing looks, and performance to worry sports cars, the AMG Hammer would go on to put the world on notice.

The Hammer can be won by taking victory in the “Tree Hugger” championship.

Series 29 also brings a Showcase Remix for Spring. “Contest of Giants” will see you strap into the Chevrolet Colorado for a race across the Scottish Highlands. Your opponent for this battle is a giant hovercraft.

Spring events and prizes are below: 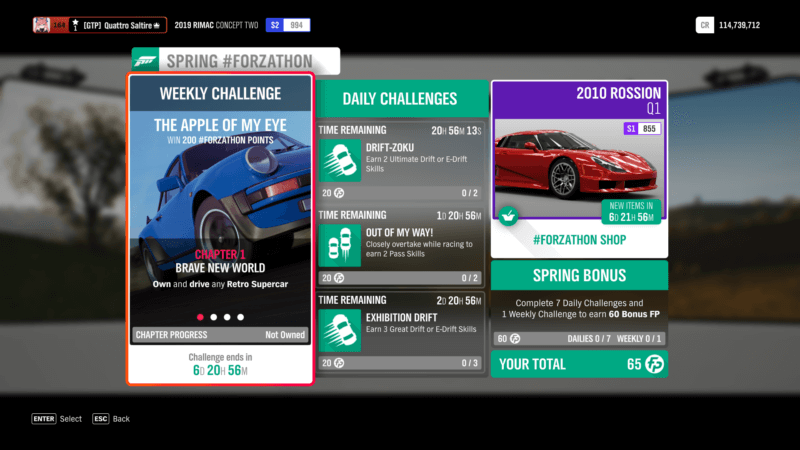 This week, Forzathon goes back in time to look at the golden age of Retro Supercars. Jump into one of the icons at your disposal to get rolling.

Next, bring your retro supercar to the races and storm to victory in three Road Racing Series events. After that, head down to the Roman Mile speed trap and earn 3 stars.

Finally, get to really know your retro icon by going for a 15 mile drive around the UK to wrap up Forzathon for Series 29. 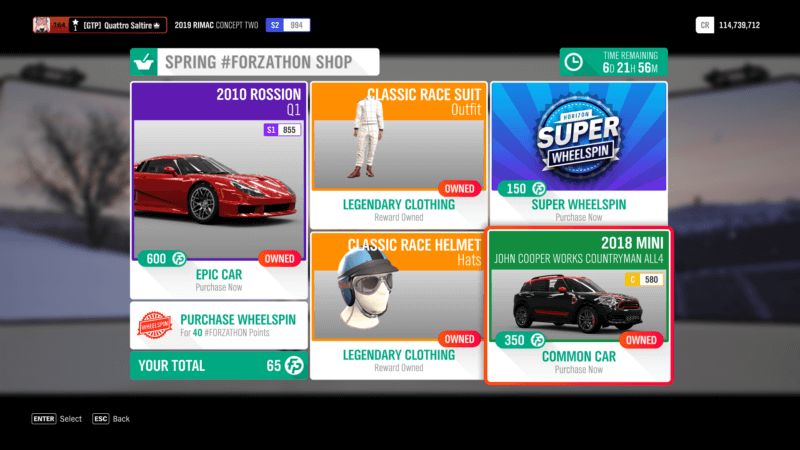 Taking the main highlight for the shop this week is the 2010 Rossion Q1. A curiously unknown American sports car, the Q1 actually traces its roots back to the Noble M12.

Losing the aerodynamic package from the Noble, the Q1 adopts a much cleaner look. Under the hood sits a Ford-sourced 3.0 liter twin turbocharged V6 with 450hp. The restyled body hides an improved chassis and suspension for even better handling.

The Rossion will cost you a hefty 600 Forzathon Points, but you’ll be getting one of the rarest sports cars on sale in return.

For something more practical, there’s the 2018 Mini Countryman John Cooper Works. A family crossover on the outside hides some serious firepower underneath. The 1.6 liter turbocharged engine makes a healthy 228hp, along with altered suspension from the initial offroad setup of the standard car.

At 350FP, the Countryman sounds like a cheap deal, but its common nature means we suggest spending your points elsewhere.

Gary Slater · Dec 11, 2020· Comments
January may be in the closing stretches, but Winter has returned for another round in Forza Horizon 4. Through the blizzards and the snow drifts, everyone at the UK festival continues to battle through the elements in order to seek out the latest events.

Gary Slater · Dec 11, 2020· Comments
As the rain begins to pour across the UK, a brand new Autumn season is revving up to take charge at the festival in Forza Horizon 4. Players are prepared to brave the muddy elements as there’s more events waiting to be conquered.

Gary Slater · Dec 11, 2020· Comments
A new Summer season has rolled around again to kick off a fresh series in Forza Horizon 4. We’re in the opening stage of Series 57, with another round of prizes waiting to be claimed during the next four weeks.

Gary Slater · Dec 11, 2020· Comments
It’s a new year, and Forza Horizon 4 is kicking off 2023 with a brand new Spring season at the UK festival. We’re also saying goodbye to Series 56 this week, with a final dash to pick up the remaining cars waiting to be claimed.

Gary Slater · Dec 11, 2020· Comments
Winter has settled across the UK once more, as festivalgoers are preparing to see off 2022 and welcome the new year in Forza Horizon 4. Along with the Hogmanay festivities, players are digging amongst the snow to grab the latest batch of prizes before 2023 arrives.

Gary Slater · Dec 11, 2020· Comments
Autumn takes a hold over the UK for another week in Forza Horizon 4 during this Christmas period. If you’re unable to make it to the festivities in Mexico, there’s still plenty of activities to keep you busy from wrapping presents.

Gary Slater · Dec 11, 2020· Comments
The countdown to Christmas is on, and Forza Horizon 4 is kicking off the preparations with a brand new Summer season. We’re now into Series 56, meaning that there is a freshly baked remix of content across the festival that will help see players into the new year over the next four weeks.

Gary Slater · Dec 11, 2020· Comments
The festive spirit is kicking up a gear as attention begins to turn towards the holidays. To help out, the UK festival is welcoming in a new Spring season to Forza Horizon 4. We’re also into the last season of Series 55, with a last push for the remaining content for this week.

Gary Slater · Dec 11, 2020· Comments
As 2022 begins to enter the closing stages, Forza Horizon 4 welcomes December with an apt Winter season. With festive plans beginning to take shape, players are continuing to hunt down the latest events.