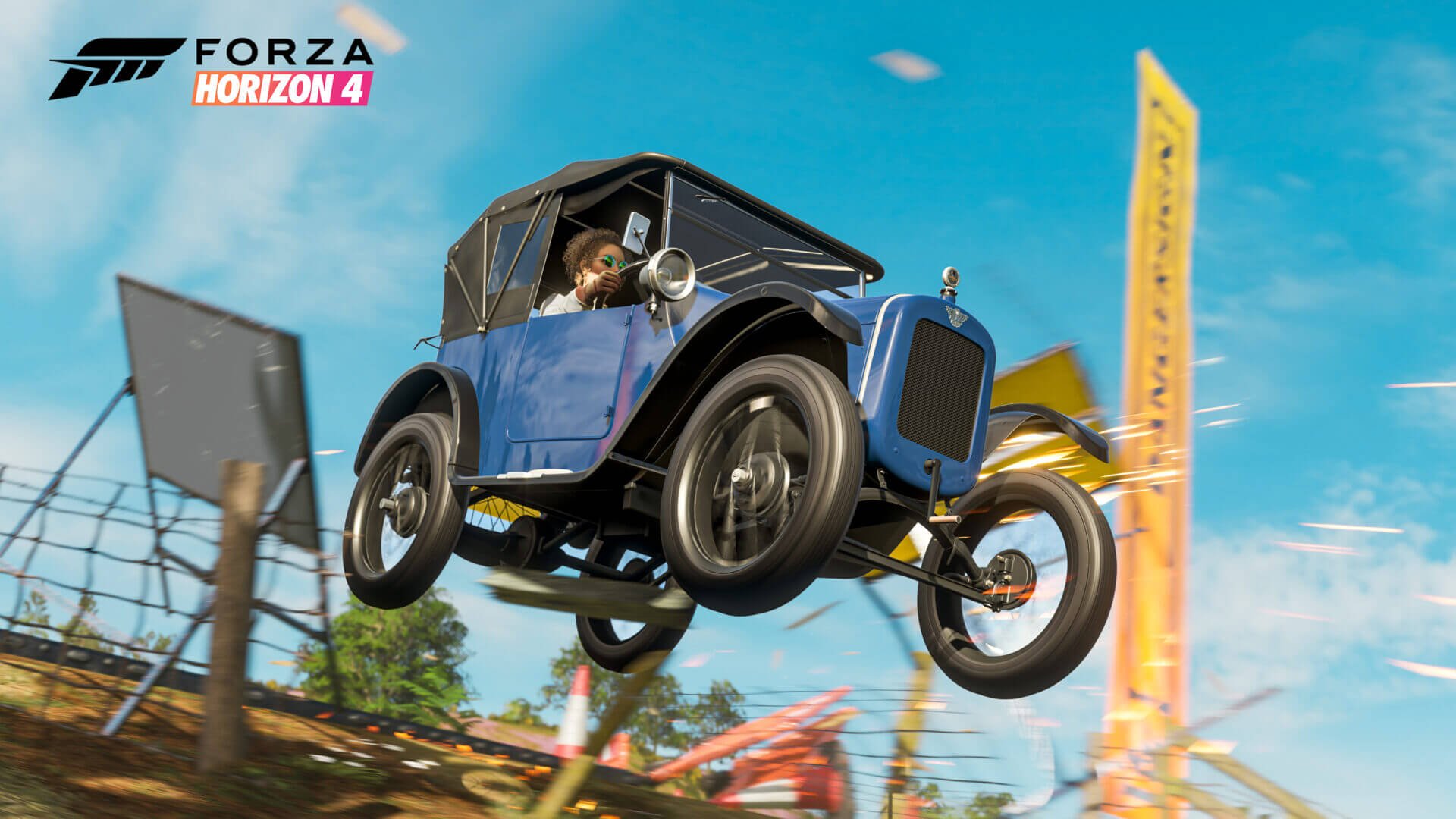 Christmas is fast approaching, and Playground Games has given players an early present by dropping the new Series 30 content update. As well as further quality-of-life improvements, there’s new content to look forward to as well as a brand new feature. 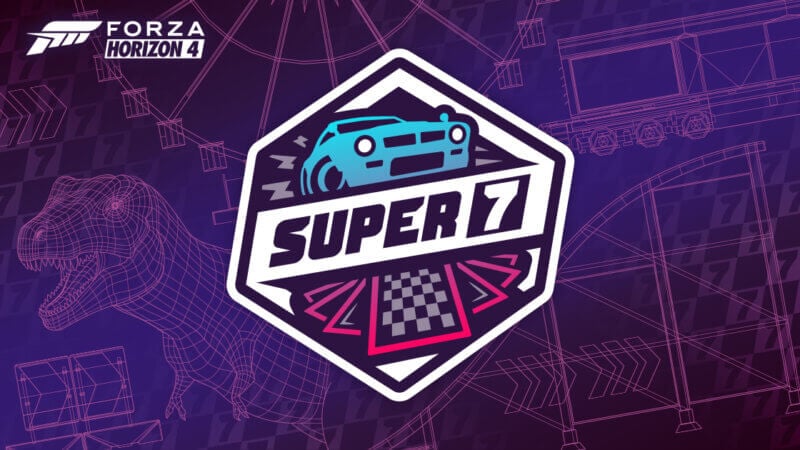 The biggest news by far is the introduction of Horizon Super7. A series of randomly selected challenges created by the community will test your driving skills like never before.

You can also create your own Super7 Challenge Card using the new Blueprint Builder. Using the Blueprint Builder, you can place down different props to make your challenge as crazy as you want. Complete all seven challenge cards and you’ll win exclusive rewards, including an Austin Seven and Triumph TR7. We spy a theme… 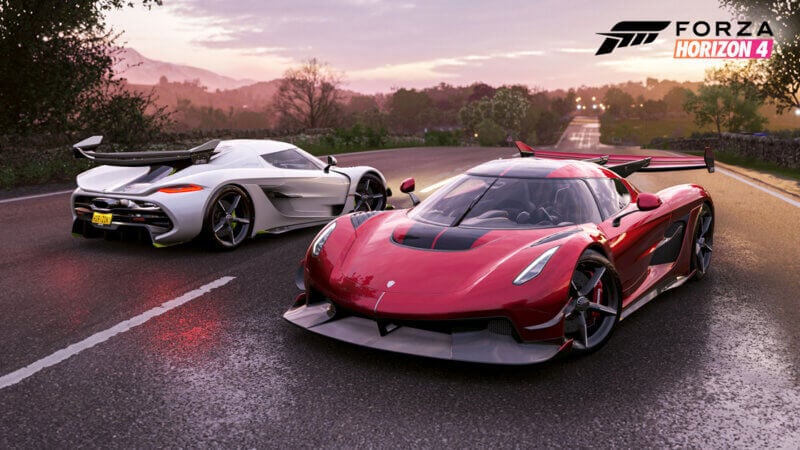 New Cars From All Across History

Series 30 brings forth a healthy dose of new cars to be won, with six in total up for grabs. The latest batch covers the very fastest, to one of the oldest and slowest to ever hit Horizon.

The star of the show is without doubt, the Koenigsegg Jesko. Named after the father of founder and CEO Christian von Koenigsegg, the Jesko wants to finally put an end to the hypercar speed wars.

With a 5.0-liter, twin-turbocharged V8, the Jesko has a scarcely believable 1,600hp when running on bio-ethanol. That colossal power means the Jesko has the potential to exceed 300mph — though we’ve not seen that happen in the real world yet.

Next up is the Alfa Romeo 155 Q4. This rather humdrum looking sedan actually holds and impressive racing pedigree, with success in touring cars. Under the hood lies a 2.0-liter turbocharged engine kicking out nearly 200hp.

With the Q4 four-wheel-drive system on hand, the 155 will handle all weather conditions with ease. That’ll prove useful in Horizon’s winter.

If you’re after something more extreme, then look no further than the Hoonigan-tuned 1974 Ford Bronco. This particular Bronco is owned by the wife of Gymkhana star Ken Block.

As well as the off-road modifications, the Bronco has had the 6.4-liter V8 replaced by a smaller 5.0-liter Coyote V8 from a Mustang. Smaller, but more powerful — with 420hp, the Bronco will be a riot to drive both on and off road.

The 1924 Austin Seven holds a significant place in history for motoring in worldwide. Like the Ford Model T, it helped bring affordable driving to the British masses. It’s also the car that got several other automotive brands up and running; Jaguar, Lotus, and BMW all owe their existence to the Seven.

That said, it’s the oldest car ever to grace the Horizon festival, and won’t be setting any performance records any time soon. Its 10hp engine means that wherever you’re going, you’ll be heading there at a leisurely pace.

The Austin is joined by one of the more forgotten small Italian sports cars: the Fiat X1/9. Styled by Bertone, the X1/9 intends to bring a slice of practicality as well as having fun.

Despite its 1.3-liter engine making just 60hp, the X1/9 is remembered for having keen handling thanks to its light weight. 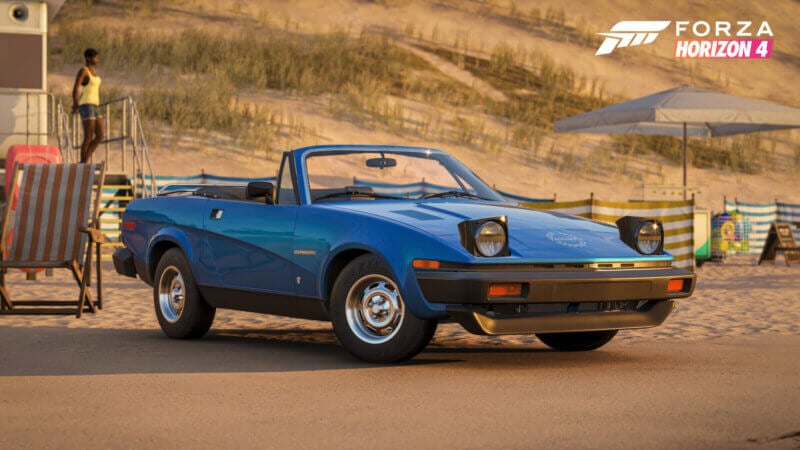 Finally, there’s the Triumph TR7 as mentioned above. The TR7’s reputation is somewhat mixed, thanks to its wedge styling — a radical departure from previous TRs — and… interesting reliability. However, it has garnered a positive reception in UK motorsports, and the 2.0-liter engine puts out a reasonable 105hp to allow for enjoyable handling on the country roads.

In addition to the cars and Super7, there’s a number of small fixes in the update. That includes a tweak for the sound of last season’s Singer 911 DLS, among with other minor bugs.

For more discussion about Series 30, head over to GTPlanet’s FH4 forums. Stay tuned for the final Series 29 seasonal update this coming Thursday before the next content batch is made available next week.

Gary Slater · Dec 9, 2020· Comments
February has graced us with its presence, and has also brought along a new Spring season for Forza Horizon 4. We’re into the closing stage of Series 57, with one more week of cars to win and events to complete before the next series arrives.

Gary Slater · Dec 9, 2020· Comments
January may be in the closing stretches, but Winter has returned for another round in Forza Horizon 4. Through the blizzards and the snow drifts, everyone at the UK festival continues to battle through the elements in order to seek out the latest events.

Gary Slater · Dec 9, 2020· Comments
As the rain begins to pour across the UK, a brand new Autumn season is revving up to take charge at the festival in Forza Horizon 4. Players are prepared to brave the muddy elements as there’s more events waiting to be conquered.

Gary Slater · Dec 9, 2020· Comments
A new Summer season has rolled around again to kick off a fresh series in Forza Horizon 4. We’re in the opening stage of Series 57, with another round of prizes waiting to be claimed during the next four weeks.

Gary Slater · Dec 9, 2020· Comments
It’s a new year, and Forza Horizon 4 is kicking off 2023 with a brand new Spring season at the UK festival. We’re also saying goodbye to Series 56 this week, with a final dash to pick up the remaining cars waiting to be claimed.

Gary Slater · Dec 9, 2020· Comments
Winter has settled across the UK once more, as festivalgoers are preparing to see off 2022 and welcome the new year in Forza Horizon 4. Along with the Hogmanay festivities, players are digging amongst the snow to grab the latest batch of prizes before 2023 arrives.

Gary Slater · Dec 9, 2020· Comments
Autumn takes a hold over the UK for another week in Forza Horizon 4 during this Christmas period. If you’re unable to make it to the festivities in Mexico, there’s still plenty of activities to keep you busy from wrapping presents.

Gary Slater · Dec 9, 2020· Comments
The countdown to Christmas is on, and Forza Horizon 4 is kicking off the preparations with a brand new Summer season. We’re now into Series 56, meaning that there is a freshly baked remix of content across the festival that will help see players into the new year over the next four weeks.

Gary Slater · Dec 9, 2020· Comments
The festive spirit is kicking up a gear as attention begins to turn towards the holidays. To help out, the UK festival is welcoming in a new Spring season to Forza Horizon 4. We’re also into the last season of Series 55, with a last push for the remaining content for this week.