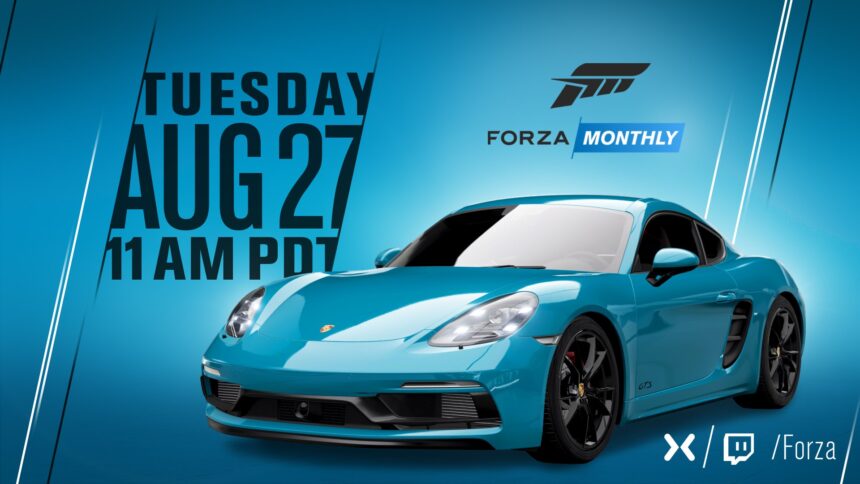 Ahead of its second show of the month tomorrow, the team at Turn 10 has teased a new addition to the Forza franchise lineup. It’s a familiar shape too, in the form of Porsche’s petite two-seater, the Cayman.

More specifically, this is the 718 Cayman GTS. With 365hp from its turbo flat four, the GTS was, up until very recently, the top model in the road-going Cayman lineup. That changed earlier this summer with the tasty new Cayman GT4 supplanting it.

That name should be familiar to Forza players too. Earlier this month, the GT4’s racing sibling, the — deep breath — Porsche 718 Cayman GT4 Clubsport spearheaded the final Forza Motorsport 7 update. It eschews turbocharging for a high-revving, naturally-aspirated six cylinder, just like its predecessor.

Back to the GTS. While the GT4 showed up in FM7 a few weeks ago, Forza Horizon 4 doesn’t have a model from the 718 family. That looks to change with the most recent tweet from the official Forza account. It’s a preview for tomorrow’s Forza Monthly, which is set to include information on Series 13 of FH4 as well as this year’s Forza RC season.

With FM7 support done and dusted, it seems almost a sure thing that the GTS will be part of the FH4 S13 lineup. However, it could be a surprise gift on FM7, or indeed come to both games. Players will find out tomorrow at 1800 UTC.

It could be a Stuttgart-heavy month for Horizon 4, too. One car we know for sure is coming to Horizon is the 1966 Porsche Carrera 906 GTS, which featured in an earlier post from the Forza Twitter account.

Forza Horizon 4 Game UpdatePorsche
5 Comments Discuss this post in our forums...
Can You Beat the Impossible Gran Turismo Quiz?

Forza Horizon 4 7 Jan 23 by Gary Slater
The golden colors of Autumn have swept across the UK once again as another season change begins in Forza Horizon 4. The latest season drops another helping of new and returning…