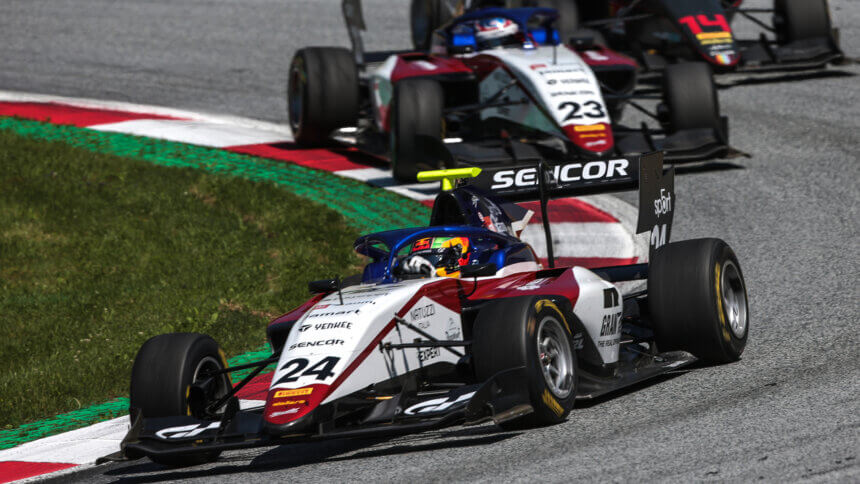 2018’s GT Sport World Champion Igor Fraga made his debut in FIA Formula 3 this weekend, and it’s safe to say that not everything went quite to plan.

The series was supporting the return of F1 at Austria’s Red Bull Ring — where Fraga won his first European race in Formula Regional in 2019. It was Fraga’s first competitive outing since winning the Toyota Racing Series in February, and his first as a Red Bull Junior driver.

Despite several months out of action, Fraga was immediately on the initial pace. After the practice session, the Brazilian was in eighth place overall, two spots ahead of TRS team-mate and rival — and fellow Red Bull Junior — Liam Lawson. However, when qualifying came round on Friday, Fraga’s Charouz developed an electrical fault, which limited him to just five laps and only one attempt at a fast lap. The issue resurfaced and placed Fraga very firmly at the back of the grid.

A somewhat bruising race saw a number of errors throughout the field. That included pole sitter Sebastian Fernandez who span, with assistance, at the very first turn of the feature race. However Fraga kept his nose clean throughout, and gained some 14 places from his start position to end as the highest-placed Charouz car in 16th — and with the eighth-fastest race lap of 1:21.814, just 0.2s off the quickest.

You’d have forgiven Fraga for some optimism going into the second, sprint race, but progression was a little harder. With two positions gained going onto the second-last lap, the Brazilian was on for another solid finish, but the gremlins returned. The engine in the Charouz stuttered for a short while, dropping Fraga to 21st, before it died completely within sight of the checkered flag. Shifting into neutral allowed Fraga to finish the race in 25th.

“We didn’t have much information to base things on but we still managed to have quite a good car and we had good speed in Race 1 and I was able to make up a lot of places. Today the car was a little more difficult to drive. We tried to do some changes which I think went a little too far but still able to stay in the top fifteen probably.

“Then on the penultimate lap at the last corner the engine died for a few seconds, I lost like six places. Then on the last lap going into turn nine the engine completely shut down so I went for neutral and just rolled across the line to take the checkered flag.”

F3 returns next weekend, again at the Red Bull Ring thanks to 2020’s enforced makeshift racing calendar. You can watch highlights from both of this weekend’s races below: