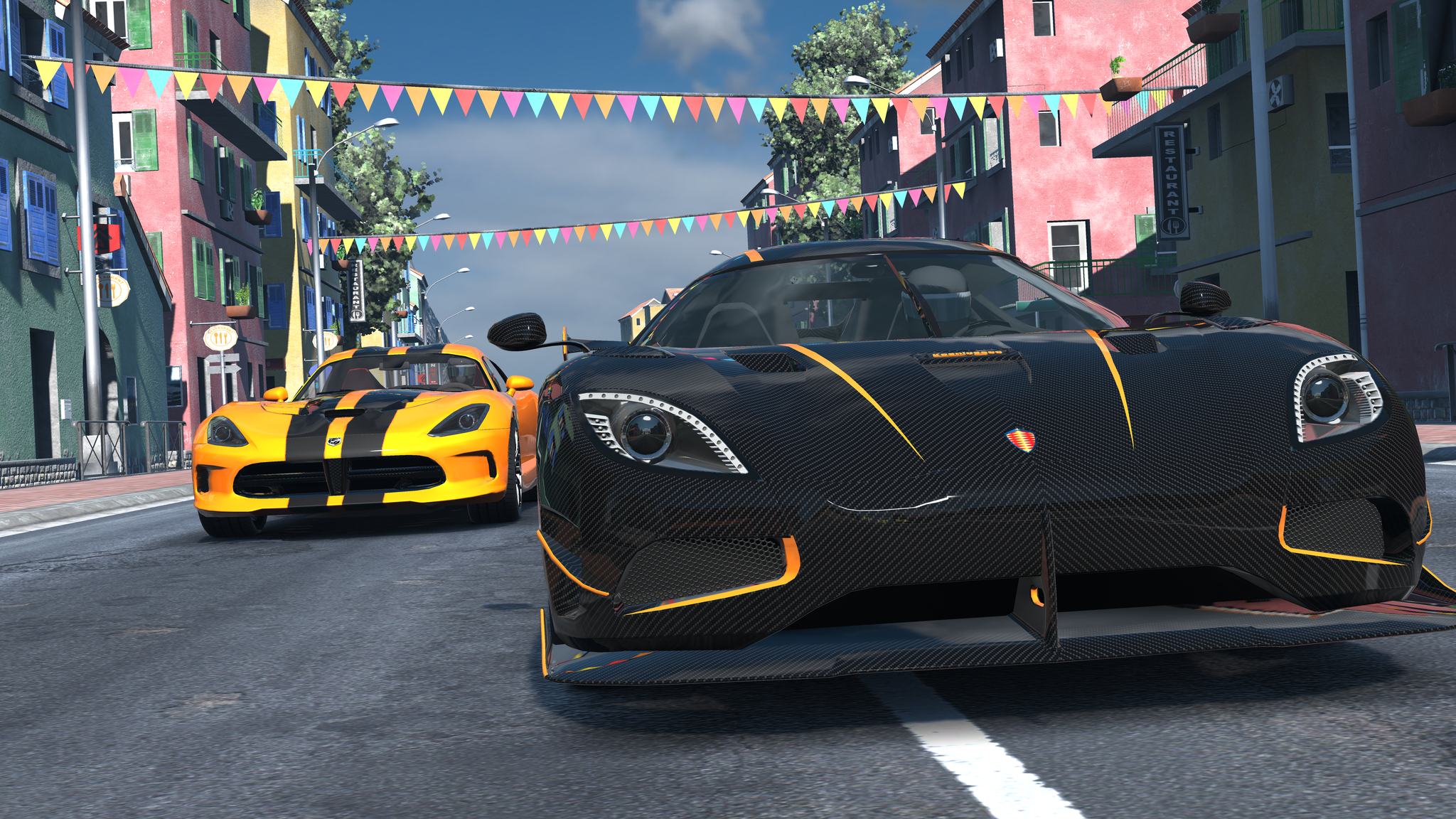 Well, it’s been a year already and the situation hasn’t changed; the Switch is still an untapped domain for the genre. Worse yet, Gear.Club, with its dodgy dynamics behind the wheel and ported-over mobile content, was little consolation for starved racing fans looking for something, anything to steal them away from Mario Kart 8 Deluxe.

However, Eden was evidently so emboldened by Gear.Club’s debut on the Switch (and, no doubt, the lack of competition) that it has turned a sequel around in just 12 short months. And like most hastily thrown together sequels, Gear.Club Unlimited 2 is so indistinguishable from its predecessor, it’ll have you questioning why it exists in the first place.

Eden has added 19 new cars to Gear.Club 2, as well as a new selection of tracks that are considerably longer than the bite-sized ribbons of tarmac in the first game. There’s also a livery editor on offer. And for those who prefer their racing experience to be contextualized, the single-player campaign is now driven by a narrative. 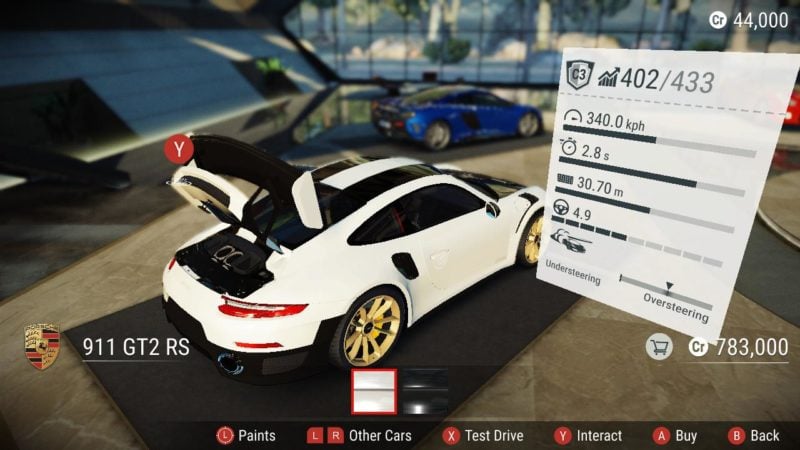 First, the new cars. The total count is now up to 51. That’s an impressive number, though the roster still doesn’t feel especially inspired, considering everything here was built within the last decade. Still, the addition of three Porsches — the 718 Boxster, 911 GT2 RS and 918 Spyder — certainly won’t go unnoticed.

The tracks are indeed longer than the first game’s, a bit more environmentally diverse, and there are many more of them. Unfortunately, they’re also let down by repetitive scenery and extremely wide roads that conceal few surprises. To the game’s credit, though, the four locales — coastal, mountain, desert and valley — are at least unique from one and another.

Exterior customization remains one of the stronger aspects of the Gear.Club experience, though the new livery editor is one of the most convoluted and unresponsive we’ve seen in a while. Apart from being laggy, the on-screen controls are also frustratingly obtuse. Ultimately, it’s more of a blunt crayon than a fine paintbrush; it’s really only ideal for crafting simple schemes, and certainly nothing as elaborate as what you’d find in Forza, GT Sport or even Need For Speed. 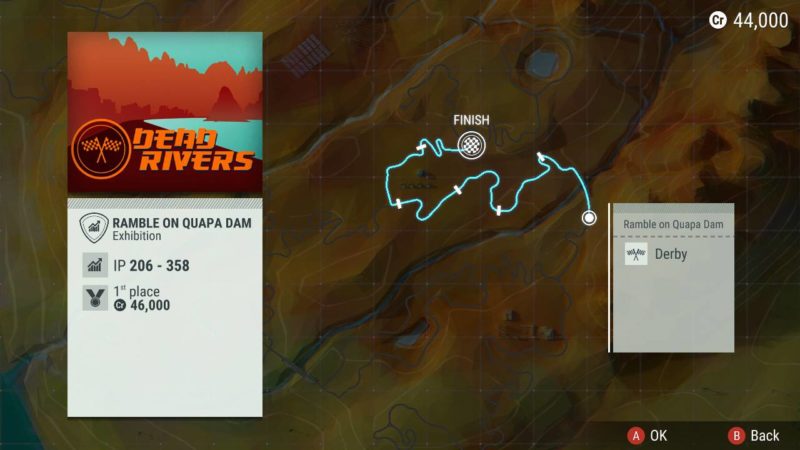 Finally, the story weaved through the career mostly functions as a series of dialogue boxes and static character overlays. You’re a reserve driver for your father’s racing team, which is on its last legs after losing its champion driver and primary source of funding. You end up taking the vacant seat, and next thing you know, all your dad’s hopes, dreams and likely a good helping of unresolved childhood baggage are resting on your shoulders.

Aside from that thread of context, the solo aspect of the game pretty much functions identically to the first, with a succession of championship events and exhibition races strewn about a map that gives the appearance of being an open world, without actually operating as one. The plot-advancing interactions mostly appear following critical events, though they didn’t grab me, and at a certain point I fell into the habit of skipping these exchanges at every opportunity.

The biggest issue with the first Gear.Club’s multiplayer was that, technically speaking, there wasn’t any. You could battle your friends’ lap times in the asynchronous Leagues mode. Otherwise, wheel-to-wheel racing could only be done with the AI’s cooperation.

The good news is that’s changing with Gear.Club 2. The bad news is, at the time of this review, it hasn’t happened yet. Publisher Microids tells us conventional multiplayer will arrive in an update at a later date. When it does, it will require a subscription to the newly-released Nintendo Switch Online program, which runs $20 per year. In the meantime, Leagues remains available as the only way to compete with other players who aren’t in the same room as you. 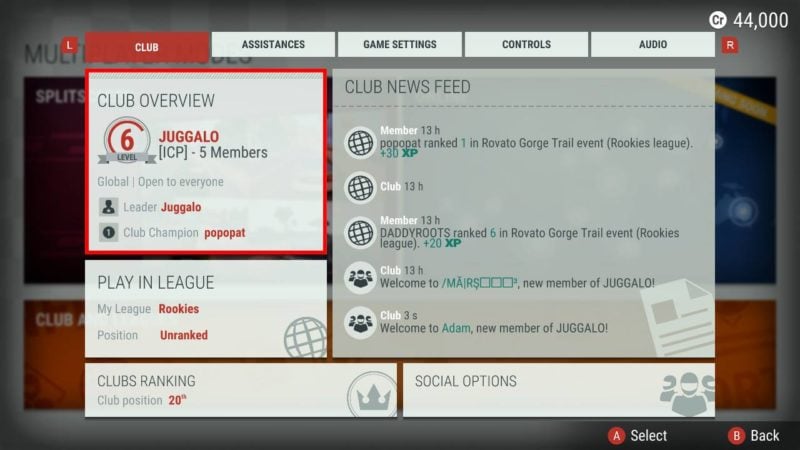 Clubs are heavily incorporated into Leagues, and you’re required to join one before you can start challenging other racers’ ghosts. Strong performances in these trials will net you personal rewards, like credits and sticker packs, while boosting the overall ranking of your club. The car and track combinations are preselected by the developers, and are replaced with new ones every few days.

Hopefully, tried-and-true online multiplayer will arrive soon. If Gear.Club is ever to be taken seriously as the home of competitive racing on the Switch, it won’t happen until Eden makes good on that promise.

Gear.Club Unlimited 2 is the most familiar of sequels; the kind that doesn’t stray too far from the feature set, content, or general design of its predecessor. But we really, really wish Eden had done something to fix the game’s broken handling.

Alas, Gear.Club 2 drives very much like the first did — which is to say, badly. The physics are marred by crippling understeer that can snap at a moment’s notice into hopeless skidding. Attempts to claw back any rear grip invariably result in snaking back and forth, as you struggle to catch up to the disjointed madness unfolding on screen. 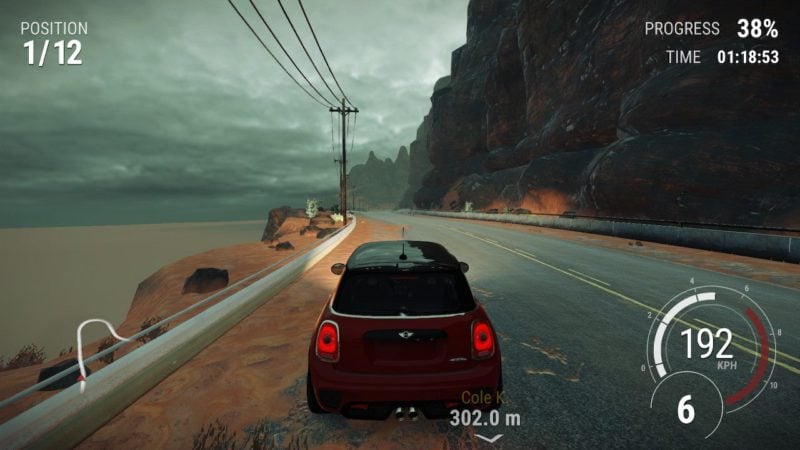 In fact, Gear.Club 2 is so phenomenally unresponsive that I’m pretty confident even the greenest drivers would have an easier time taming any of its rides in any other title, including most simulators. There’s a palpable delay between your actions and gameplay that can’t be totally rectified with assists. It’s jarring for a game that is ostensibly supposed to be accessible.

Oh, and one more warning: Gear.Club 2 is really fast. Even the introductory class (which operates by a backwards structure in which “A” is the slowest, for some inexplicable reason) can shock you with its speed. Applying the brakes merely offers a suggestion to stop, especially when you’re dealing with more powerful vehicles.

Ordinarily, the brisk tempo at which the game moves would be acceptable, if the steering wasn’t so vague. But anytime you hop into a John Cooper Works Mini and immediately feel as though things are running away from you, things can only go downhill from there.

To its credit, Gear.Club Unlimited 2 at least looks a little different from the first, with punched up visuals that take advantage of a newer version of the Unity game engine.

This iteration still doesn’t resemble anything that would rival the best-looking racers on the previous generation of consoles, but it’s still an upgrade from the original. Whereas the first Gear.Club struggled to hide its mobile roots, the sequel sports richer lighting and shadows that are particularly noticeable when racing at dusk. Trackside foliage, rocks and other details have also been increased, which helps distract from otherwise repetitive textures and unremarkable course design. 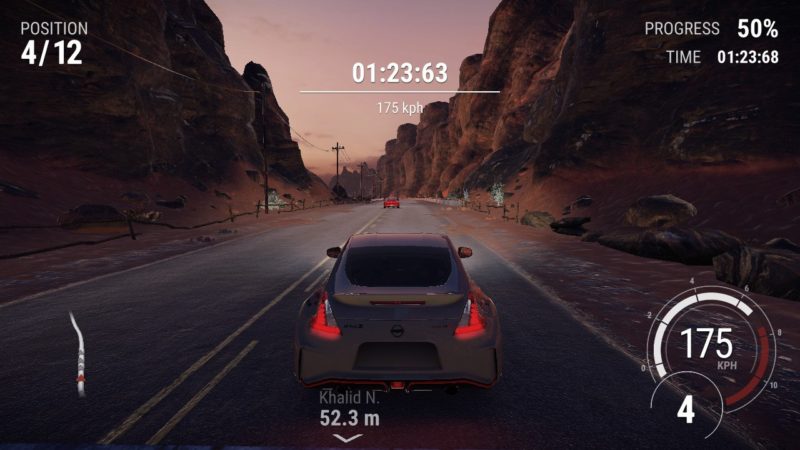 Less has been done to differentiate the car models, which remain rather jagged and basic in quality. There’s still no interior view or cosmetic damage — a further reminder that the bulk of the graphical legwork has been levied at the tracks.

Even with the modest improvements, though, Gear.Club 2 is far from a smooth experience. Gameplay routinely chugs when multiple cars are rendered on screen. As if that weren’t infuriating enough, load times are extremely lengthy, especially in the lead-up to races. The minute-long loads before assembling on the grid might actually be the single worst thing about Gear.Club 2, particularly because of the way the screen teases you by hanging at 95 percent for 30 seconds at a time.

Given how much of Gear.Club Unlimited 2 has been recycled, it shouldn’t come as much surprise that the sound has been, too. Engine sounds and ambient noise don’t feel like afterthoughts per se, but there’s nothing here that really stands out, either. At least you get some nice rattling gravel noises when driving off-road.

Don’t expect background music while racing, either. What little soundtrack there is has been constrained to light, upbeat, and ultimately forgettable electronic tunes looping in the menus.

Last year’s Gear.Club was hardly impressive, but forgivable to a certain extent. You could chalk up the game’s failings to its mobile roots, and tell yourself that if Eden was given another shot to deliver a sequel that truly took advantage of the Switch’s capabilities, well, things would be different.

That chance has come and gone and sadly, Gear.Club 2 is hardly the racer the Switch deserves. In fact, it changes so little and doubles down on so many of its puzzling and uninspired choices that it’s even more offensive than the original, because this is still a full-priced $50 release we’re talking about.

Fortunately, there are a pair of handheld racers on the horizon in V-Rally 4 and Grid Autosport that could fill the role on the Nintendo’s platform that Gear.Club never quite could. We’re rooting for them; at this point, they might be the genre’s last hope on the console.

Don't be fooled by the title. Gear.Club Unlimited 2 is very much the same as the first, and still not the Switch racer you've been waiting for. 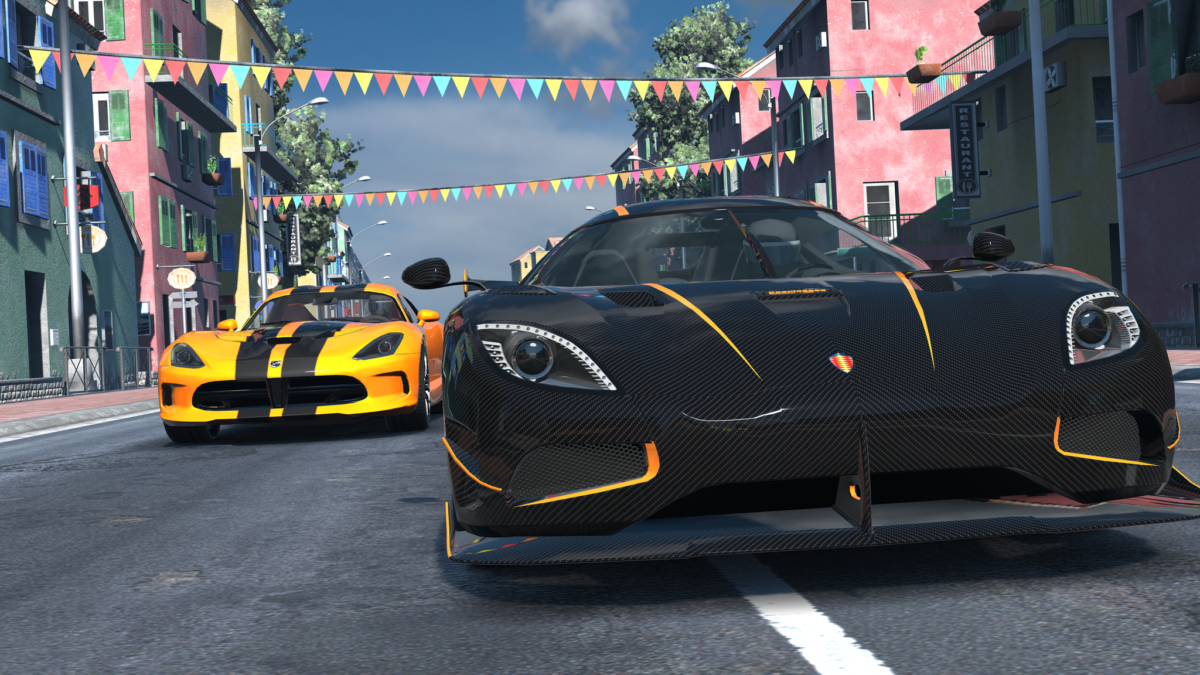 Eden’s tossed in some extra cars and fleshed out the tracks somewhat, but the new livery editor is a miss.
Online Features

Without true competitive multiplayer at launch, asynchronous play is your only option.
Driving Physics and Handling

Remarkably unresponsive and imprecise, lacking the feedback you need to handle the pace of the action.
Graphics

Improved environments and lighting give way to average-looking car models and an inconsistent frame rate.
Sound

There’s very little of it. Some background music would be nice to spice up ordinary engine sounds.

6 Comments
Click here to see the related discussion our forums...

On our long list of “things we weren’t expecting to read” this year was renowned Italian motorbike simulator developer Milestone being the studio behind a toy car game... 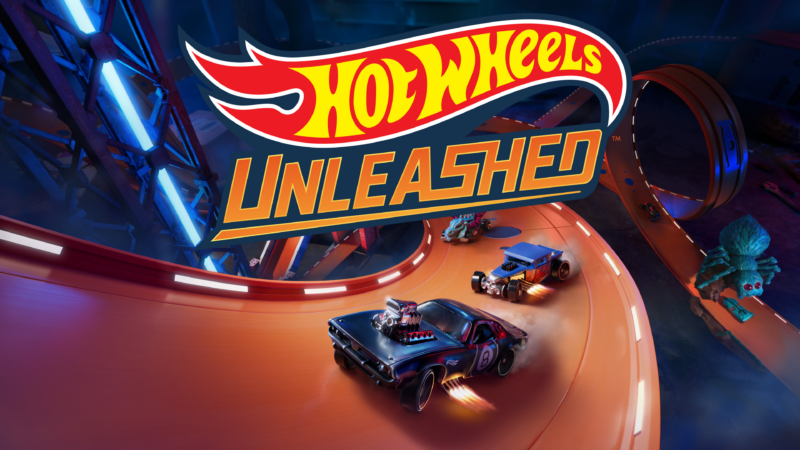 The first set of Gran Turismo Sport Daily Races for autumn has arrived, with a rather unusual event first up on the docket for the week... 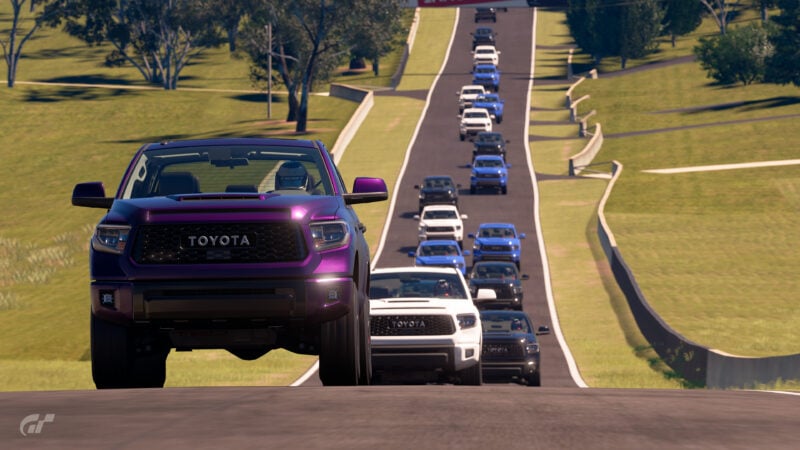 art of rally Coming to PlayStation on October 6

Independent developer Funselektor (Dune Casu) has confirmed that art of rally will finally be coming to PlayStation on October 6... 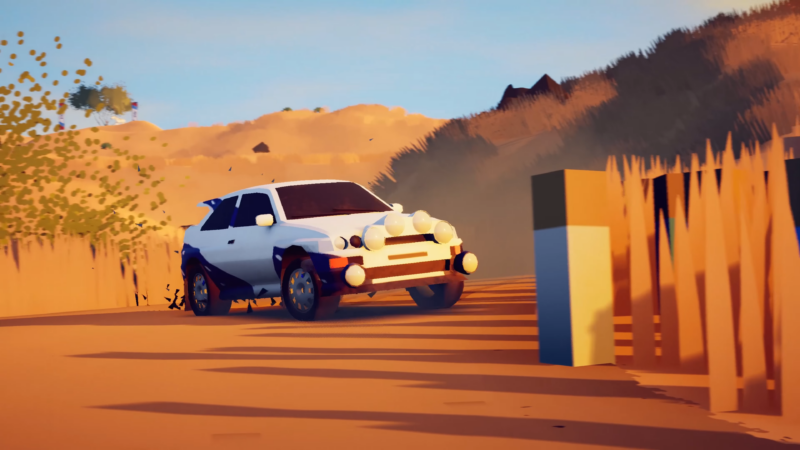 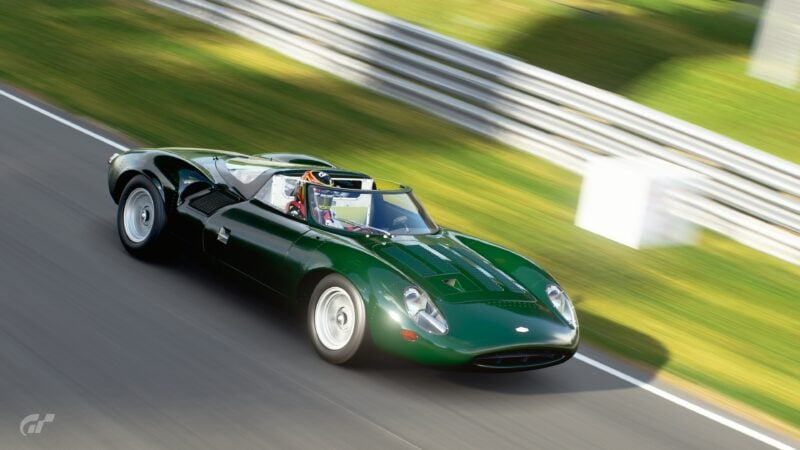