With GT Academy Race Camps only occupying a month a year, we’ve often wondered what the huge fleet of 370Zs and GT-Rs are used for the rest of the time. A short, 3 minute feature on a regional news program in the UK, spotted by GTP member “Humphrey” gave us a surprising insight.

Mission Motorsport is a charity supporting seriously injured British servicemen, including amputees, using sports therapy and adventure training to rehabilitate those who have been affected by military conflict as part of the Battle Back scheme. Run by servicemen, veterans and motorsports professionals, Mission Motorsport provides vocational training in all aspects of motorsport right from driving and garage crew to logistics and PR. GT Academy was on hand, with Le Mans veteran Derek Bell, to provide driver training at a Thruxton test day last month. 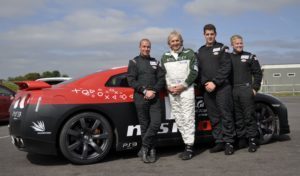 However, the GT Academy involvement doesn’t end there. The experiences of developing novice gamers for motorsports over the last four years has enabled the team to better focus the training for the team’s drivers and, with the support of the RJN Motorsport team, Mission Motorsport will be entering a Nissan 370Z in this weekend’s Britcar 24 Hour race at Silverstone. The driver line-up for the race is:

Major James Cameron – co-founder of Mission Motorsport, a seasoned racer and instructor and a veteran of Iraq and Afghanistan, commanding the Armoured Group in Helmand Province.

Trooper James Gillborn – James is a below-knee amputee, having fallen victim to an IED in Afghanistan in June 2011. Learning to walk and drive again with a prosthesis, James’s first race was only a month ago in a Nissan 350Z in the Britcar Production Cup at Snetterton. 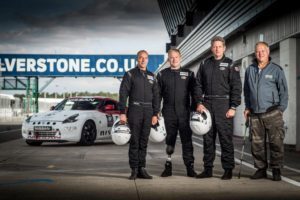 Lance Corporal Martyn Copleston – Martyn was also severely injured by an IED in Afghanistan in 2011, when detonated by the Warthog vehicle he was in. He was Mission Motorsport’s first racing driver but, as a handy mechanic, has worked as part of the pit crew team too.

Sergeant Gary Dunning – Gary was diagnosed with PTSD following a tour in Iraq and this was compounded when he was involved in a motorbike accident and sustained significant injuries throughout his body. Despite having to be effectively rebuilt, Gary then served further tours of duty in Iraq and Afghanistan.

Chris Ward, Silverstone’s chief instructor and teammate of Jann Mardenborough in the RJN GT-R for the Blancpain Endurance Series, is also listed as a driver entry for the team’s car, running in class 4 and wearing a green #93 for the race.

The race starts at 1430GMT on Saturday September 22nd, with commentary throughout on Radio Le Mans. For more information on Mission Motorsport, please visit their website or Facebook page.

Andrew Evans · Sep 19, 2012· Comments
As Red Bull was unveiling its Formula One contender for the 2023 championship season, the RB19, the team also revealed a highly unusual competition that will see the car run in three different fan-designed liveries this season.

Andrew Evans · Sep 19, 2012· Comments
For the fourth event in a row, a team of sim racers has beaten professional racing drivers at the showpiece Race of Champions (ROC) — this time going one step further and winning an entire knockout match against the pros.

Andrew Evans · Sep 19, 2012· Comments
Formula One has confirmed that 2023 World Championship will run over a record 23 events, with racing to resume on the weekend of March 5.

Andrew Evans · Sep 19, 2012· Comments
The most famous 24-hour race in the world is back, for its 90th running, just 10 months on from its last event as it returns to its normal spot on the calendar.